A group of cyclists are staging a week of action across Dublin to draw attention to, what they s...

A group of cyclists are staging a week of action across Dublin to draw attention to, what they say is, "fatal neglect" of roads by critical public services.

It comes just days after cyclist Neeraj Jain was killed after being hit by a lorry in Dublin city on his way to work.

'I Bike Dublin' is organising the series of actions.

The group says: "The safety needs of people who cycle in Dublin have been ignored by the State for too long.

"This week, I Bike Dublin will hold a series of actions targeting those State institutions that bear responsibility for the safety of people who cycle in this city.

"We don't take the decision to hold these ‘Stop Killing Cyclists’ events lightly, but we are demanding urgent action to ensure that no-one else dies on Dublin's roads."

The action began on Tuesday at the Dublin City Council offices.

The group says this is to highlight "inadequate progress on infrastructure projects on Dublin's roads". 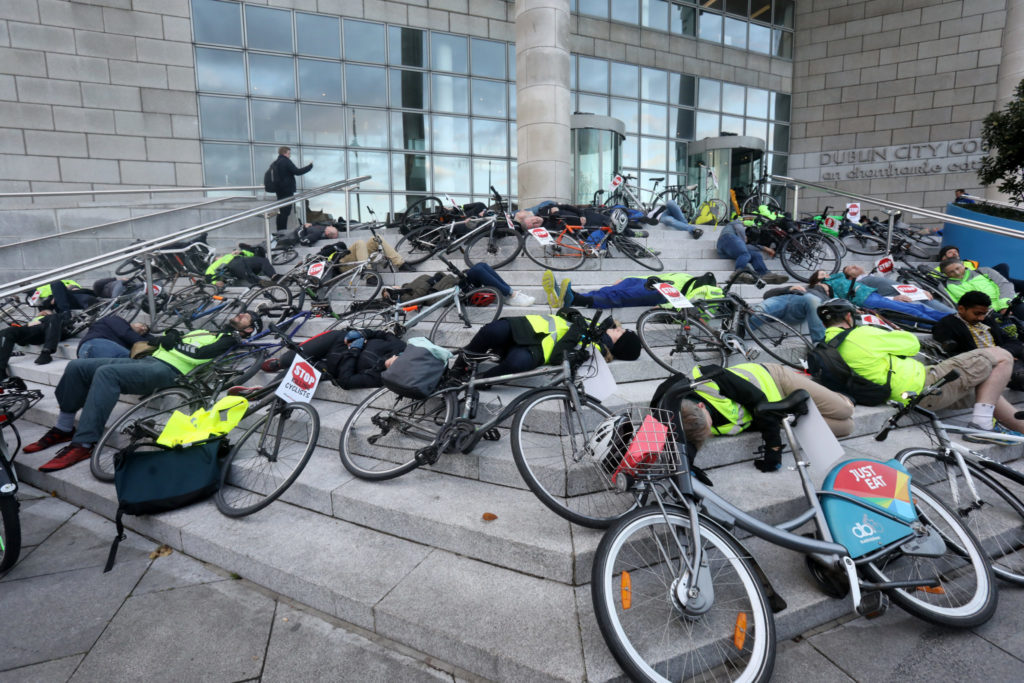 Cyclists lie down on the steps of Dublin City Council offices as part of Bike Dublin Week of Action | Image: Leah Farrell/RollingNews.ie

It claims this progress would save lives.

"These die-ins are actions that we undertake in order to illustrate the risk that each and every person in Dublin takes whenever they step up on their bicycle to go to work, school, college, to go to the supermarket or visit their relatives."

They hope that the death of Mr Jain marks a turning point - "and that those responsible for safety on our streets ensure that no more cyclists are killed."

I Bike Dublin wants a commitment from those responsible for the safety of the roads that there will be no more deaths of people who cycle.

It suggests this space can be taken from private motor traffic lanes and on-street car parking - and not from pedestrians.