Naming those who reach a financial settlement with the Criminal Assets Bureau would be a positive...

Naming those who reach a financial settlement with the Criminal Assets Bureau would be a positive thing to do as the “shame within [their] community” would be a punishment in itself, one of Ireland’s leading crime journalists has said.

The Criminal Assets Bureau was set up in 1996 following the deaths of Detective Garda Jerry McCabe and journalist Veronica Guerin; it sues people suspected of acquiring their assets through the proceeds of crime and if a settlement is reached before civil proceedings begin, then the names of those involved in the litigation are not published.

However, a review ordered by Justice Minister Helen McEntee has recommended that the names of all those involved in settlements with the CAB be published and journalist Nicola Tallant says this would likely upset many criminals who want their neighbours to think they are upstanding members of society.

“Funnily enough it might be something that would bother them as regards their neighbours knowing because that’s another thing you can often come across that these people are operating under the radar,” she explained to The Pat Kenny Show.

Still, however important their good name is to them, Ms Tallant says their money is far and away their overriding preoccupation.

“They certainly don’t glory when they get their money taken because that really hits them where it hurts,” she continued.

“And I don’t know a single one of them that likes coming up against the Criminal Assets Bureau in any way, shape or form.

“In actual fact, even sometimes when the Criminal Assets Bureau are seizing or have identified what might be a drop in the ocean for some of these guys, they will still be absolutely incensed that that is being taken from them by the state.

“It’s just a mentality, a mindset that they feel entitled to it.” 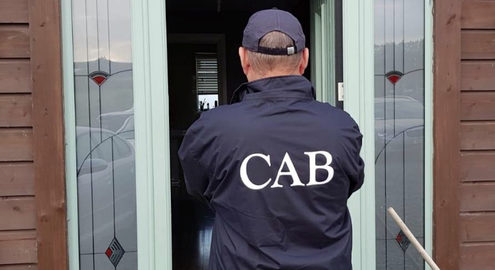 The powers of the CAB to sue and seize the assets of criminals has been finetuned over the years and Ms Tallant says the Irish people have one man to thank for that - convicted criminal John Gilligan.

“CAB has really reviewed itself over the years,” she continued.

“And one of the many characters that’s very responsible for that has been John Gilligan because he has challenged that legislation to such an extent.

“He challenged every little aspect of it. He brought it all the way to the Supreme Court and kind of made it watertight really.

“And the nation has him to thank for the establishment of the Criminal Assets Bureau but also for waterproofing that legislation in the courts because of his insistence that there was no way he was handing over any of his assets to the state.”

Main image: The logo on a jacket of a member of the Criminal Assets Bureau carrying out searches on homes and businesses in Dublin.