British Prime Minister Boris Johnson has been taken into intensive care after his condition from the coronavirus worsened.

A spokesman for Mr Johnson said: "Since Sunday evening, the prime minister has been under the care of doctors at St Thomas’ Hospital, in London, after being admitted with persistent symptoms of coronavirus.

"Over the course of this afternoon, the condition of the prime minister has worsened and, on the advice of his medical team, he has been moved to the intensive care unit at the hospital."

The spokesman said that the British foreign secretary, Dominic Raab, would deputise for Mr Johnson where necessary.

He added: "The PM remains conscious at this time."

"He has been moved to the ICU as a precaution should he require ventilation to aid his recovery."

Tánaiste Simon Coveney has wished Mr Johnson well, tweeting: "Everyone in Ireland is tonight wishing Boris Johnson well. This is a difficult time for the UK and it’s Govt."

Everyone in Ireland is tonight wishing @BorisJohnson well. This is a difficult time for the UK and it’s Govt. We in #Ireland wish the PM a speedy recovery. 🇮🇪 🇬🇧

Earlier Mr Johnson was said to be in "good spirits" after spending a "comfortable" night in hospital.

He was there under observation, Downing Street said earlier.

His official spokesman said earlier he had been working on official papers from his hospital bed. 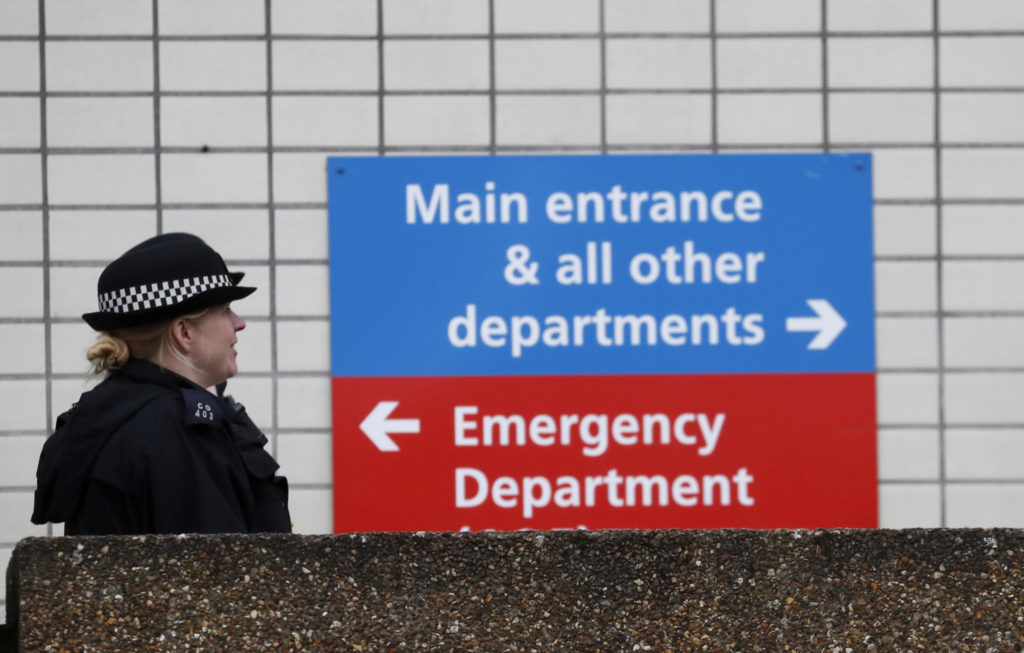 A police officer stands outside a hospital in London, England where it is believed that Britain's Prime Minister Boris Johnson is | Image: AP Photo/Frank Augstein

Mr Johnson was admitted to hospital on Sunday night for tests after continuing to display symptoms of COVID-19, the disease caused by the coronavirus.

He earlier wrote on Twitter: "Last night, on the advice of my doctor, I went into hospital for some routine tests as I'm still experiencing coronavirus symptoms.

"I'm in good spirits and keeping in touch with my team, as we work together to fight this virus and keep everyone safe."

He also praised the "brilliant" staff taking care of him.

Last night, on the advice of my doctor, I went into hospital for some routine tests as I’m still experiencing coronavirus symptoms. I’m in good spirits and keeping in touch with my team, as we work together to fight this virus and keep everyone safe.

His spokesman declined to give any details of the treatment Mr Johnson has received.

Downing Street also dismissed a report in Russian state media that he was on a ventilator, describing it as "disinformation".

It comes amid a further spike in COVID-19 related deaths in the UK.

Some 403 hospital patients have died after contracting coronavirus in England.

There were an extra 27 deaths in Wales taking the overall number to 193, and two further deaths in Scotland where the total now stands at 222.

The British capital city remains a hotspot, accounting for 129 of the 403 deaths.