There has been an increase in the use of special powers by Gardaí in light of the coronavirus pandemic.

The Policing Authority has published the second in a series of reports on its assessment of policing performance by An Garda Síochána during the COVID-19 crisis.

It found that for the week ending May 2nd, there were 47 incidents where powers under the Health Act were used.

This represents a small increase of approximately 4% on the previous week.

It brings to the total number of times these powers were exercised since their introduction to 139. 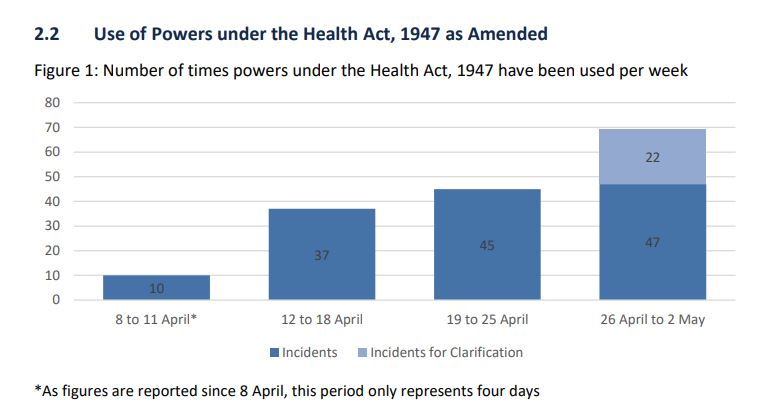 An Garda Síochána has advised that two of these incidents were at the direction of a health professional.

The north-western region accounted for 57 (41%) of incidents since April 8th, with the other four regions demonstrating lower numbers.

However the authority adds that there are "no discernible hot-spots" at this time.

A further 22 incidents are being reviewed to determine their exact nature and may result in an increase or decrease to this number.

In the same time period, anti-spit hoods were used in 13 incidents - bringing the total uses to date to 293.

Previously, the authority expressed concern that there was potential for anti-spit hoods to be used on children between the ages of 12 and 18.

But it said that none of the incidents reported to date have involved anyone in this age group.

Since their introduction, they have mostly been used in Dublin Metropolitan Region, which accounted for 12 of the incidents.

Public order offences accounted for 12 of the incidents, while assault made up a further seven.

Incapacitant spray and batons have also been used in addition to the hoods in some incidents.

The report also highlights some concerns - such as the matter of priority COVID-19 testing for Garda personnel, policy on the presence of armed Gardaí at some checkpoints, and the policing approach to a number of public events.

The authority said it will keep these issues "under review" in the coming weeks.

Policing Authority Chairperson Bob Collins said: "These are challenging times for the Garda Síochána as well as for the entire community.

"The new statutory measures confer powers on the Gardaí that could scarcely have been contemplated a matter of weeks ago.

"The authority sees its continuing oversight engagement in this area as a particularly important exercise of its statutory role.

"Public understanding of the new powers and of how the Garda Síochána uses them contributes greatly to sustaining public confidence and to compliance with public health guidelines."

To authority has also engaged with a range of statutory, voluntary and civil society organisations to gain a broadly based perspective on policing performance. 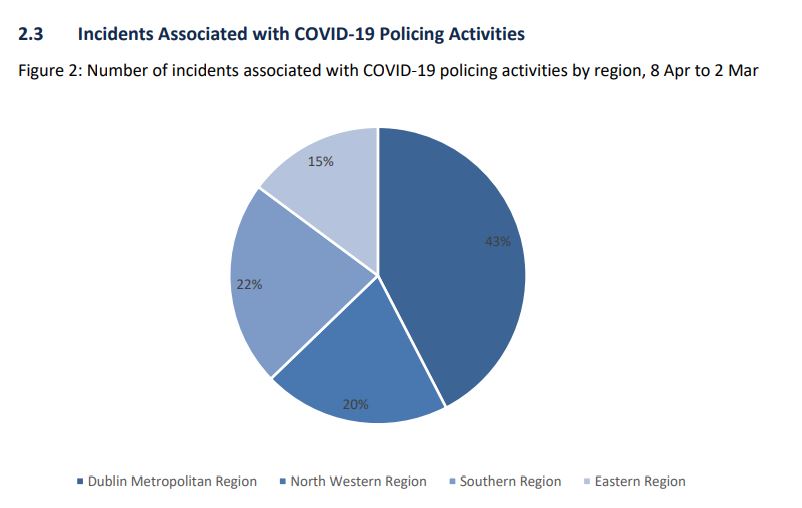 Justice Minister Charlie Flanagan has briefed the Government on the report.

He said: "It is evident, from the Garda Commissioner’s weekly reports, that there continues to be a high level of compliance by the public with these restrictions.

"And I am also pleased to see the authority’s independent assessment that An Garda Síochána are continuing to police this ongoing health crisis in a sensitive and proportionate manner and to use the temporary powers provided to them only sparingly."

"These reports show us that, as a society and a State, we are acting within the law and working together in these difficult times to face down the threat of COVID-19 and keep our communities safe.

"It is important that we continue to do so."

Main image: Members of the Gardaí on O'Connell Street in Dublin. Picture by: Leah Farrell/RollingNews.ie

Luke O'Neill: 'The legacy of the pandemic will be that science has delivered'