The Finance Minister Pascal Donohoe says capital projects like the Dublin MetroLink could be defe...

The Finance Minister Pascal Donohoe says capital projects like the Dublin MetroLink could be deferred because of the COVID-19 crisis.

He says they may be put on hold because of reasons beyond his control.

It comes as Government projections say Irish GDP will fall by more than 10% this year, with unemployment to peak at 22%.

Minister Donohoe has warned 220,000 jobs will be lost this year - saying it is clear the economy is "now in the midst of a severe recession".

Government Chief Economist John McCarthy has said the coronavirus crisis will lead to the "deepest recession since the 1930s" internationally.

It is projected that there will be a recovery in 2021 with a 5.5% increase in employment, while the numbers out of work to fall below 10% next year.

However, the economy will not return to where it was at the start of this year until 2022.

The predictions are based on restrictions lasting for three months, and GDP could fall by as much as 15% if they last until the end of the year.

The Metrolink project includes 19 km of new metro from Estuary north of Dublin Airport to Charlemont south of the city centre. 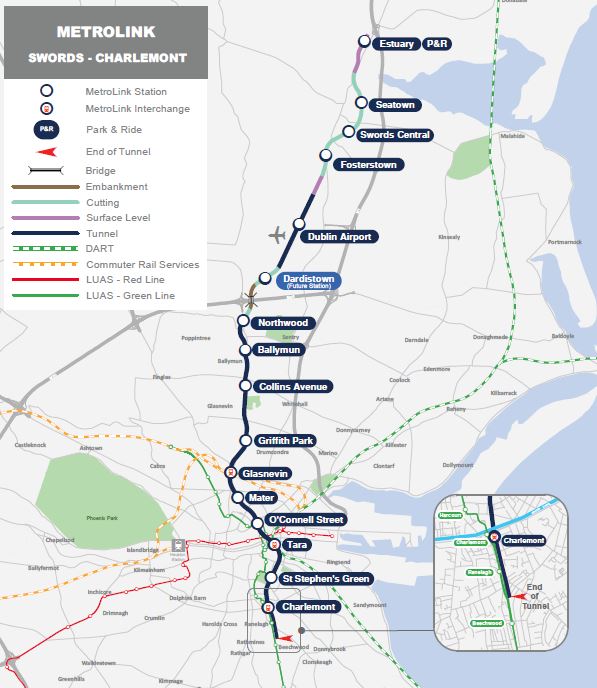 The MetroLink route from Swords to Charlemont | Image: MetroLink

It will involve the construction of 16 stations and contains a significant length of tunnel.

The National Transport Authority (NTA) and Transport Infrastructure Ireland (TII) had expected to apply to An Bord Pleanála for planning permission in 2020.

The construction phase was set to begin in 2021, with the system to become operable from 2027.

The preliminary estimated cost of the MetroLink, in 2018, was approximately €3bn.

But Minister Donohoe told Newstalk Breakfast this timeline may have to change.

"It's possible Shane that some of those projects may be differed for reasons that are beyond my control.

"For reasons that, for example, large companies might decide themselves regarding do they want to stay in procurement processes, are they still in a position to deliver against commitments they've made with governments?

"So that possibility is there."

"But my intention going into this is to try to preserve as much of our big capital commitments as I can.

"And those things - not only are they really important socially - but they're also an essential element of how we can rebuild our economy.

"But it will take some time to become clear on exactly what will be able to go ahead - because there are many things that are changing at the moment that are beyond our control".

Main image: An illustration of a MetroLink train. Picture by: MetroLink