Cost of living cuts: What are people getting?

An energy credit, set to be paid in April, is being doubled to €200

Cost of living cuts: What are people getting?

People's bills are about to get cheaper, as will their trips on public transport.

It's part of a new €290m package to offset higher costs of living.

The Government says the total package comes to €1.5bn, when the budget is also taken into account.

So what's in it for you?

The energy credit is set to be paid in April to just over two million households.

A lump sum payment of €125 on the Fuel Allowance will be paid in early March to some 390,000 recipients.

While the reduction in public transport fares will impact approximately 800,000 daily users.

Reduced caps for multiple children on school transport fees will also be cut to €500 per family post-primary, and €150 for primary school children.

A reduction in the Drug Payment Scheme to €80 "will benefit just over 70,000 recipients", the Government says.

And a Working Family Payment increase, announced on Budget Day, is being brought forward to April 1st. 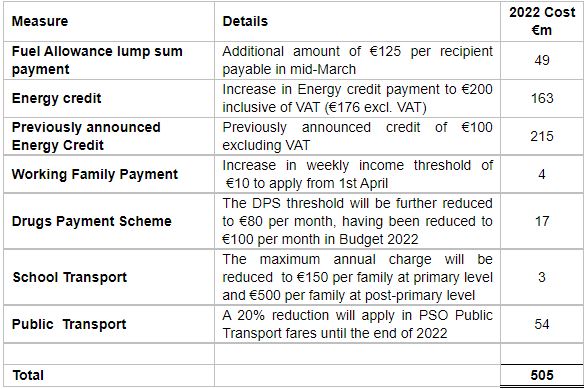 Finance Minister Paschal Donohoe says the increase in prices was faster than they expected.

"The rate of inflation that we have seen in the past few months has exceeded our expectations, mainly because of higher energy prices.

"While we expect the inflation rate to moderate from the second quarter of this year, it is nonetheless appropriate to respond to the increase in prices and today we are doing this.

"When taken in conjunction with the measures announced already, the Government package amounts to €505m, a significant change."

And Public Expenditure Minister Michael McGrath adds: "The centrepiece is a cut in the electricity bill of every household of €200 including VAT.

"This will be accompanied by an additional exceptional payment of €125 to households in receipt of the Fuel Allowance.

"The Fuel Allowance payment will be made in March, with the credit of €200 including VAT for electricity being applied to electricity accounts in April.

"A key concern in setting out these measures is to ensure that timely support is provided to all households specifically targeted at energy costs, while using the social welfare system to target additional support to those who are in receipt of the Fuel Allowance."