Dublin North-West - which includes areas such as Blanchardstown, Finglas and Castleknock - continues to have the highest rate in the county, having now surpassed 200 cases per 100,000.

That compares to 152.2 a week ago, and represents 425 positive cases identified in the area over the past two weeks.

However, the rate has continued to rise in all parts of the county - with the rate now surpassing 150 in Dublin South East and Dublin North Central. 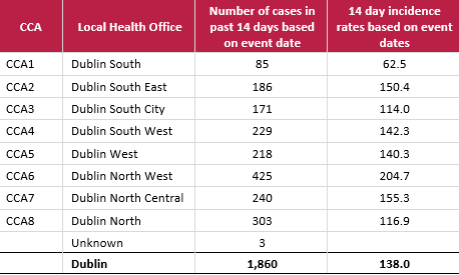 The number of COVID-19 cases per 100,000 people in Dublin over the past two weeks. Image: HPSC

Dublin South has the lowest incidence rate, but has increased to 62.5 from 45.6 a week ago.

The rates in all eight regions are:

More detailed information about the COVID-19 rates in individual local electoral areas is available on the Government's dedicated website.

Any impact from the level three restrictions introduced for Dublin on Friday are unlikely to be seen until at least next week, due to the incubation period for the virus.

Luke O'Neill: 'Of course we'll get back to a pre-COVID world... but it will take time'