There has been 1,124 further cases of COVID-19 in Ireland, latest figures show. The Health Protec...

There has been 1,124 further cases of COVID-19 in Ireland, latest figures show.

The Health Protection Surveillance Centre (HPSC) says 349 patients are hospitalised with the virus.

While 65 of these are currently in ICU.

The five-day moving average of cases has dropped to 1,142. 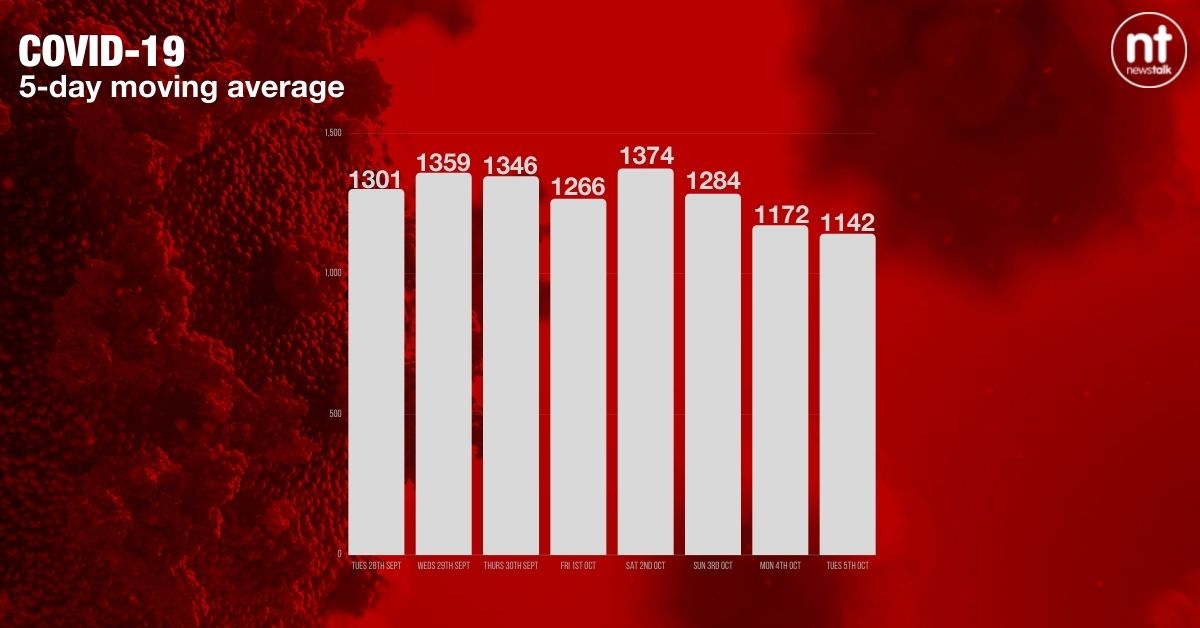 Meanwhile the European Medicines Agency (EMA) has approved booster doses of the Pfizer-BioNTech vaccine for everyone aged 18 and over.

Third doses of both the Moderna and Pfizer vaccines were also approved for people with severely weakened immune systems.

However DCU Immunology Professor Christine Loscher has suggested there is no real evidence supporting the need for a population wide COVID vaccine booster campaign.

She earlier told Newstalk Breakfast: "When we actually approved the boosters for the over 65s and the over-80s a couple weeks ago we did that actually before the EMA approved booster shots.

"We did that off-label so we could get started.

"There is no real evidence at the moment that, in the general population, that you are going to require a booster.

"If we look at Israel, people will say that actually the Israelis are way ahead of us, they have given three million boosters and they said their case numbers have come down, but when they started giving their boosters, they only had about 70% of their population vaccinated so it is a bit different.

"They did that in parallel, so it is hard to draw conclusions."

While Professor Luke O'Neill said a new pill 'is the one they're looking for' to fight COVID-19.

MSD - or Merck - says that molnupiravir reduced the risk of hospitalisation or death by approximately 50%.

Prof O'Neill told The Pat Kenny Show it is all looking very positive.

"This is the one they're looking for - antiviral. They've been looking for antivirals to kill the virus anyway, as well as vaccines.

"Remdesivir was the first one that came along - this beats remdesivir into a cocked hat, basically.

"50% decrease in hospitalisation, which is an amazing thing, so it just shows you this could be the one."

And he said the next move is up to US authorities.

"Merck are asking for emergency use immediately, they've gone to the FDA right now and given them all their data... and if they get emergency use, it'll be launched very quickly.

"Merck are already scaling up production; they're making 10 million doses as we speak to begin getting the drug out.

"Again we wait for the FDA, because they have the final decision but it's heading in the right direction".

WHO makes direct appeal to Ireland not to give booster shots

Luke O'Neill: Why we shouldn't vaccinate the under-12s for now