Amazon opening its first fulfilment centre in Ireland will see more money leaving the country, according to Conor Pope.

It comes as the online retail giant is set to open its first dedicated warehouse in Ireland next spring.

The firm says it will create 500 new permanent jobs at its fulfilment centre in Baldonnell Business Park in Dublin.

The new positions mean Amazon will soon employ over 5,000 people in Ireland.

The company says the new centre will hold millions of items to be picked, packed and shipped to customers across Ireland as well as the rest of Europe.

It is also set to open a second delivery station in the capital, "serving customers in Dublin and the surrounding areas".

The announcement confirms long-rumoured suggestions that Amazon was looking to expand its Irish operations.

Most Amazon goods to Ireland come from the UK - meaning Irish customers have faced extra import charges since Brexit.

Conor Pope, consumer affairs correspondent with the Irish Times, told The Hard Shoulder this warehouse will be handy for consumers.

"It's basically a giant warehouse... it houses hundreds of thousands of products that are selling on Amazon.com or Amazon.co.uk - or potentially Amazon.ie

"Up until now, all the fulfillment centres that have been servicing the Irish market... have been based in the UK.

"But as a result of Brexit, and as a result of Amazon's clear desire to circumvent all the Brexit red tape - and the additional charges that come about as a result of the UK being what's known as a third country when it comes to trade - they decided they would give us a warehouse all of our own".

Conor says this will see same-day delivery for Irish customers on thousands of items.

"An awful lot of the time you'd be talking about electronics - and of course Amazon came into the world as a book seller.

"But when you ask 'What does Amazon sell?' - the reality is Amazon sells virtually everything.

"And if Amazon isn't selling it, other third parties are selling it using the Amazon platform". 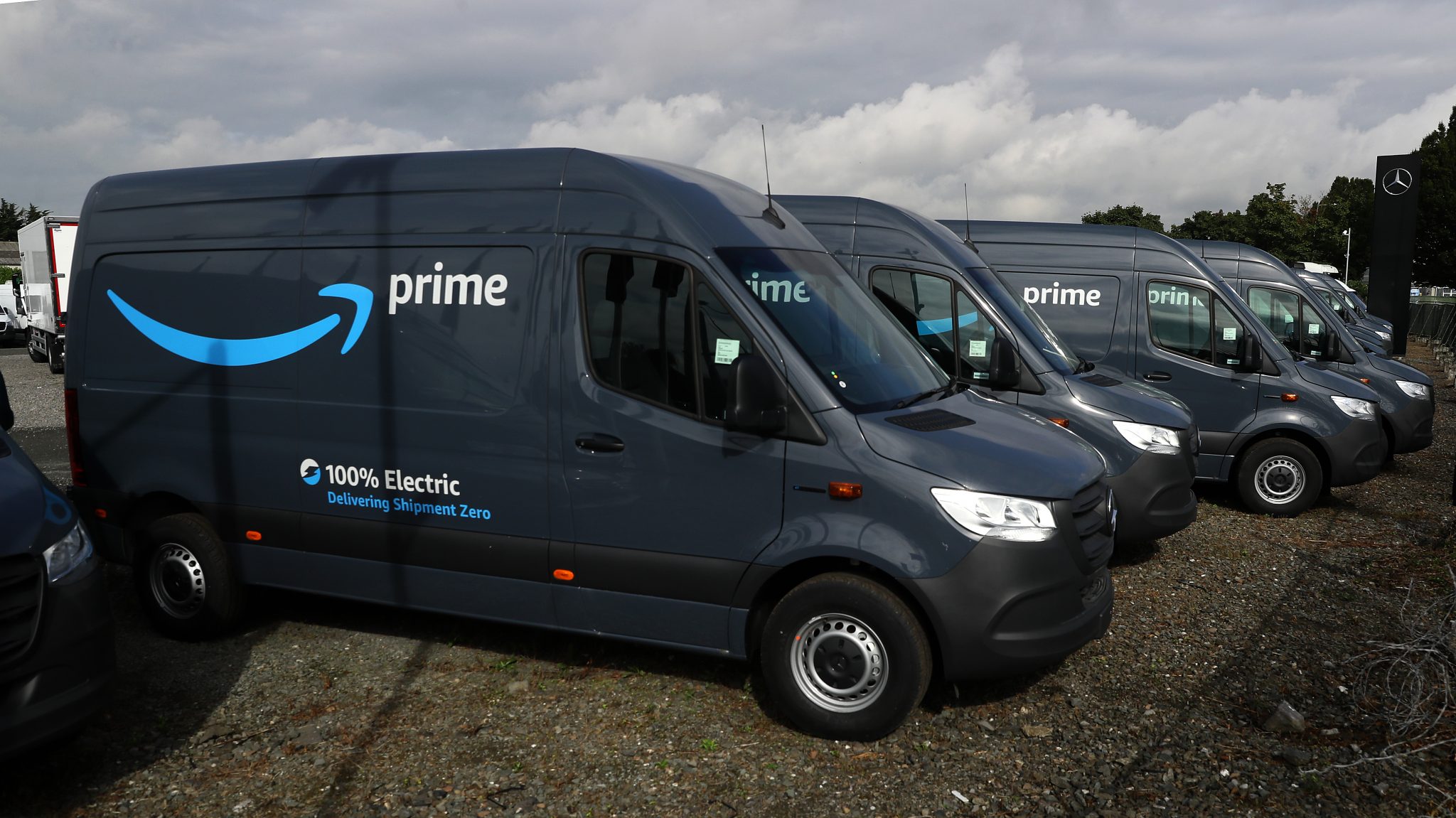 A fleet of Amazon vans on the forecourt of a Mercedes dealership in Dublin in September 2021, as construction continues at nearby Baldonnell Business Park on what will be its first warehouse in Ireland. Picture by: Brian Lawless/PA Wire/PA Images

But Conor says this will see more online shopping money leaving the country.

"That means that all of the jobs that would have been created in the country if we were servicing that market disappear - those jobs don't exist.

"The tax implications are huge, so effectively all of that money is just disappearing from the Irish economy.

"That's happening - and that's probably going to happen even more, now that Amazon have their deeper fingerprint or deeper footprint in Ireland."

'You can't smell the cheese '

The head of Retail Excellence, Duncan Graham, says this announcement wasn't a surprise.

"It's inevitable first off... but I do think on the plus side, Irish retailers are fighting back.

"And when it comes to consumers, Amazon is the lazy way out - it's transactional retailing.

"If you want something specific you'll go on to Amazon, if you want to have the experience of shopping you'll go and visit a shop or browse through a boutique's website.

"You use your five senses when you shop - you can't smell the cheese on Amazon... you can't feel the material of a product you're going to buy on a website - you can only do that when you go into a store".

But he adds: "For some retailers this actually is an opportunity... but in effect, once you hand that brand over to Amazon you lose some of that brand identity yourself".