An appeal to An Bord Pleanála against a decision to refuse permission for a hotel at Dublin's Cobblestone Pub has been withdrawn.

The pub in Smithfield is known for its traditional music sessions and support for the arts.

Labour Councillor Joe Costello described it as 'good news' and thanked all those involved.

Good news in this morning's post! The appeal to @anbordpleanala against @DubCityCouncil decision to Refuse Permission for hotel at @CobblestoneDub has been withdrawn. Well done to all involved in the campaign
We need to protect & nurture our City's cultural spaces#PeoplePower pic.twitter.com/DsHl4rxZth

Reacting to the news, Mr Costello says this may see other developers think twice.

"There's been so much intrusion and infringement and moving in on spaces that were formerly cultural spaces by developers.

"The fact that this was so huge and so spontaneous, and so angry that this was taking place in this fashion, I think this might discourage developers from coming up with these type of developments that are totally out of kilter with what should be in place.

"I would hope now that the appeal has been withdrawn that that will be the end of it".

News that the pub could have lost 70% of its floor space to a new 114-bed hotel brought hundreds of people out onto the streets in protest late last year.

The pub is a protected structure, and the planning proposal would have seen it lose its backroom venue, smoking area and upstairs rooms.

The Tánaiste Leo Varadkar has previously said he believes permission for a hotel at the venue should have been refused.

"If I ever have visitors in town and they want to hear some trad music, I'd either take them to the Cobblestone or Dame Tavern. It's an authentic spot", he told Newstalk last November.

"Certainly my view in terms of what's being proposed there… with the hotel essentially enveloping the Cobblestone… I think Dublin City Council should refuse that application.

"I don’t say that lightly, by the way - I’m a former tourism minister, and I don’t have an ideological objection to tourists coming to the city.

"The question you have to ask yourself is in a world that’s becoming increasingly homogenised… why do people come to Dublin? They come to see what's unique and distinctive.

"If you start to take away places like the Cobblestone, you actually undermine our longer-term offering for tourism." 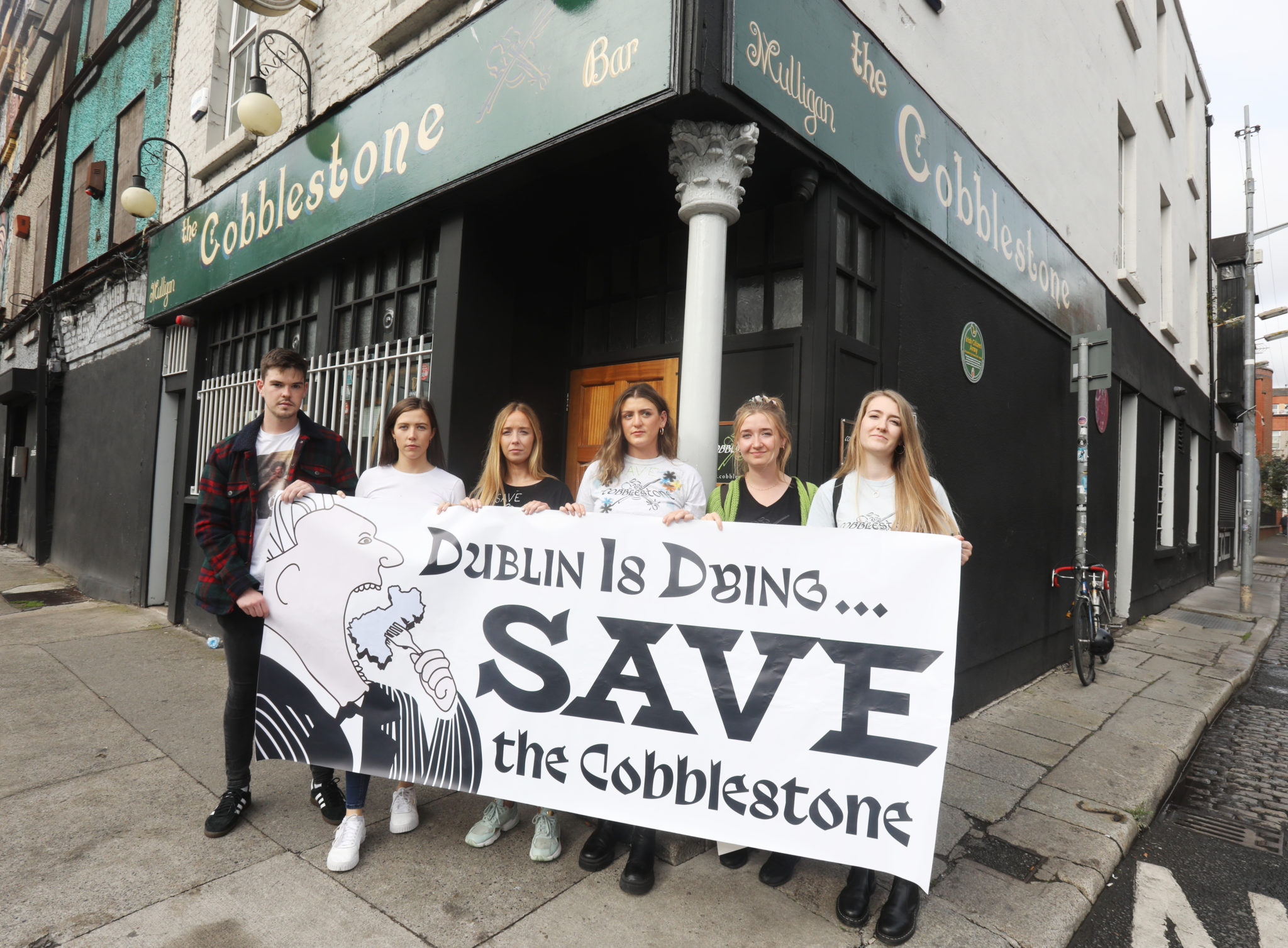 Protesters with a placard outside the Cobblestone Pub in Dublin in October 2021. Picture by: Leah Farrell/RollingNews.ie

While singer Imelda May has previously said progress needs to be balanced with protections.

"Absolutely, like everybody else walking around Dublin, wondering what's happening as you're watching hotel after hotel being built", she said late last year.

"It's really worrying that the culture is been forgotten about, or not been guarded as much as it should be.

"You can always go by the people of a city; we know in Dublin we see it changing all the time.

"Change happens, and that's normal, but the people of the city know the heart of the city - and know it's been stolen and robbed and plundered.

"And that's what feels like is happening now; it's so many really important parts of our culture as a city - and as a country."