The European Centre for Disease Prevention and Control (ECDC) is suggesting an extended school br...

The European Centre for Disease Prevention and Control (ECDC) is suggesting an extended school break, to prevent a surge of coronavirus cases.

The pan-EU agency is warning of an increased risk of transmission of the virus over Christmas.

It recommends that to decrease this risk during and after gatherings, "an extension of the school holidays or a time of distance learning for students" should be considered.

While it also suggests a similar time of remote working for employees to reduce the opportunities for transmission in the workplace before and after the end-of-year break.

The report notes that this time of year is "traditionally associated with activities such as social gatherings, shopping and travelling, which would pose significant additional risks for intensified transmission". 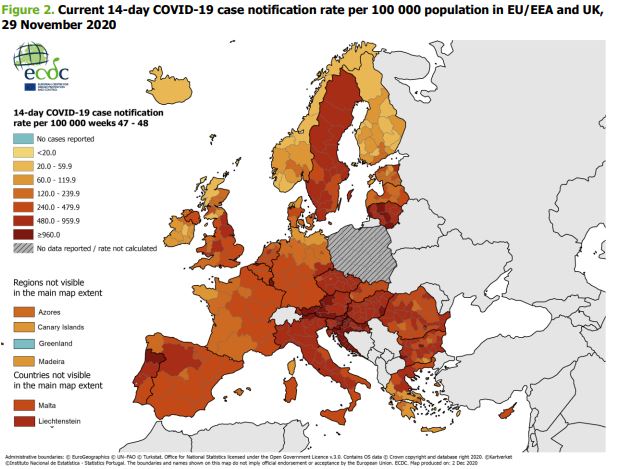 But it also says that an "aggravating factor" is reports of what has been described as 'pandemic fatigue' - with some people becoming de-motivated to follow protective measures, especially during this period.

The ECDC also warns that lifting measures too early "would result in an increase in cases and hospitalisations, and this would be particularly rapid if measures were lifted abruptly."

Based on the various factors, it says the risk that COVID-19 poses to the general population is assessed as 'high'.

But for vulnerable individuals, including the elderly and people with underlying health conditions, this moves to 'very high.'