The Taoiseach has made a formal State apology in the Dáil to the women and families affected by the CervicalCheck scandal, describing it as a "debacle that left a country heartbroken".

Around 80 women with cervical cancer travelled to Leinster House for the statement by Leo Varadkar about failures within the state's cervical screening programme. 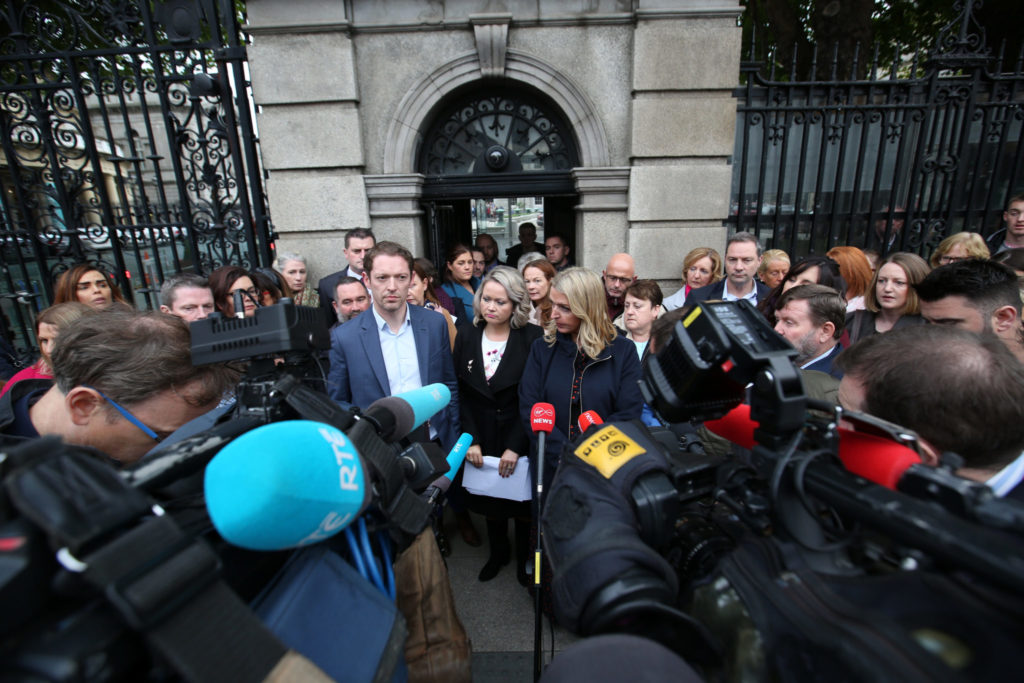 Pictured (LtoR). Stephen Teap, Lorraine Walsh and Vicky Phelan surrounded by some of the 221 cervical cancer patients who received an incorrect smear test, speaking to the media outside Leinster House after hearing the Taoiseach apologise to the victims of the CervicalCheck controversy. Photo: Sam Boal/RollingNews.ie

Speaking in the chamber this afternoon, Mr Varadkar said: "As Taoiseah on behalf of the State, I apologise to the women and their loved ones who suffered from a litany of failures in how cervical screening in our country operated over many years.

He pointed to the failures in clinical governance, leadership, management, and "the failure to tell the whole truth, and to do so in a timely manner."

He added: "Sorry for the humiliation, the disrespect, the deceit, the false reassurance, the attempts to play down the seriousness of this debacle by some, and inaccuracies in claims from others - all of which added to confusion and public concern.

"Today's apology, I know, is too late for some who were affected, and for others it will never be enough. Today's apology is offered to all the people the State let down, and their families who paid the prices for those failings as well.

"A broken service, broken promises, broken lives... a debacle that left a country heartbroken... a system that was doomed to fail.

"A State apology may not provide closure, but I hope it will help to heal."

He committed to implementing all of the recommendations in Dr Gabriel Scally's report into the controversy.

He also highlighted further errors identified since the initial report, acknowledging there is much more to do to restore confidence in the screening programme.

He concluded: "On behalf of the Government and the State, I'm sorry that all this happened, and I apologise to all those hurt or wronged.

"We vow now to make sure that it never happens to anyone else ever again."

Today's apology comes after it emerged last year that 221 women were not informed that they were given incorrect smear test results before later being diagnosed with cancer.

Speaking after the Taoiseach's statement, the 221+ patient support group said the apology is a "watershed moment".

Members of the 221+ group leaving Leinster House after the Taoiseach’s apology this afternoon pic.twitter.com/2JQOXMmkUQ

She observed: "It's a first step in the process of rebuilding confidence in the capacity of the State to put the patient first in the delivery of public healthcare generally, and for women's health specifically.

"For us, the acknowledgement and the apology have huge significance - they are central to the process of healing, and the rebuilding of our lives and the lives of those who love, support and care for us."

Brian Hayes: My attendance at 'Golf Gate' was 'a big error of judgement'