The Central Bank has warned the coronavirus has triggered a severe negative shock to the Irish e...

The Central Bank has warned the coronavirus has triggered a severe negative shock to the Irish economy.

In its quarterly bulletin, it says this is "fundamentally different" in nature and scope from anything previously seen.

"Given the uncertainty of the situation, it is not possible to produce a conventional forecast," the bank says.

Instead it looks at judgement and draws on a range of analytical tools.

The bank says based on the assumption that containment measures and restrictions remain in place for a three-month period before being rolled back, GDP could decline by 8.3% this year.

In this scenario, the unemployment rate could rise to around 25% in coming months.

On the assumption that both domestic and global economic activity begins to recover in the second-half of the year, the unemployment rate could then begin to move gradually lower.

But the bank says it may still remain "relatively high and in double figures" by the end of the year.

It says COVID-19 has resulted in the widespread shutdown of businesses, mainly in the market services sectors of the economy, with labour-intensive sectors - such as retail trade, food and beverage, accommodation, tourism and travel - particularly affected.

Numbers released on Thursday for the Live Register showed over 500,000 signing on or receiving income supports.

On the external side, the bank says the exports of indigenous firms are likely to be "adversely affected" by the sharp decline in external demand.

But, as was the case during the financial crisis, there may be some offset to this from the performance of exports of pharmaceutical products and medical devices.

It says these sectors are likely to be less negatively affected by weak external demand. 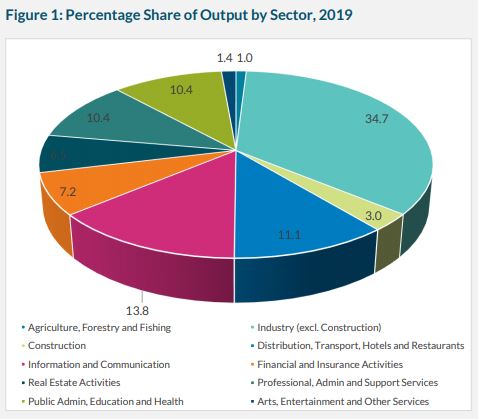 Mark Cassidy is director of economics and statistics with the Central Bank.

He says: "It is important to stress that due to the nature of this pandemic and the ongoing uncertainty it is not possible to produce a conventional forecast on the outlook for the Irish economy.

"However, the near-term outlook for the economy is very unfavourable and, beyond that, the path ahead for economy depends on the path of the virus, both domestically and globally.

"The starting point for the recovery will depend on the depth and duration of the downturn, which is, as yet, unknown, though the hope is that forceful containment measures can shorten the period during which economic activity has come to a stop.

"When it emerges, the pace of recovery is likely to depend on factors such as the extent to which households and firms have been scarred by the downturn, the degree to which precautionary behaviour unwinds, the recovery in employment and incomes and, possibly also, the degree of stimulus in place to provide some impetus to recovery."