Transport emissions dropped by 15.7% as a result of COVID lockdown measures

Carbon emissions reduced less last year than in 2019, despite the country being under COVID-19 lockdowns.

The Environmental Protection Agency (EPA) says the country will not reach its 2030 target at the current rate of decline.

The environment watchdog says greenhouse gas emissions reduced by 3.6% last year - but that is down from a 4% drop in 2019.

But the EPA says that sharp drop is likely to be a once-off, as it was mainly due to lockdowns.

Peat-fuelled electricity fell by 51% last year, while there was a 15% increase in wind generation.

The EPA says this led to a 7.9% reduction in energy industry emissions.

However residential greenhouse gas emissions grew by 9.0% in the same period, with a "substantial increase" in fossil fuel use.

This was driven by low fuel prices and with more people working from home.

Agriculture emissions also increased by 1.4% - the EPA says this was driven by increased activity in all areas, including a 3.2% increase in the number of dairy cows. 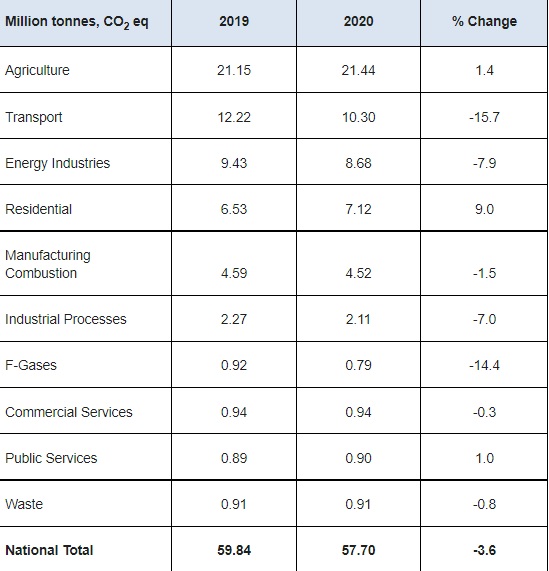 Provisional greenhouse gas emissions for 2019 and 2020 for Ireland. Source: EPA

International aviation emissions to and from Ireland actually decreased by 65%.

However this is not part of Ireland's total greenhouse gas emissions by international agreement.

While the country has committed to reducing emissions by 51% by 2030, Mary Frances Rochford from the EPA says that will not be reached at the current rate of decline.

"We would need to double that target - we need a 7% annual reduction to meet the 51% target", she says.

But Laura Burke, director-general of the EPA, says there were some positive trends.

"Greenhouse gas emissions decreased again in 2020 following the decrease seen in 2019, with a continuation of some positive trends in the data, such as the phasing out of peat burning in electricity generation.

"The behavioural changes required to deal with the COVID pandemic also led to a reduction in emissions in sectors such as transport, while there was an increase in emissions from the residential sector."

Main image: 2019 file photo of a power station at the Shannonbridge on the Offaly/Roscommon border. Picture by: Eamonn Farrell/RollingNews.ie