There have been calls for the army to be sent into Galway to ensure enforcement of coronavirus he...

There have been calls for the army to be sent into Galway to ensure enforcement of coronavirus health guidelines.

In a joint statement, they said what happened was "completely unacceptable" and will all work to ensure it does not occur again.

They said: "The upset, anger and concern of people across the city at the events that unfolded was shared and acknowledged by all.

"In particular and in light of the lack of social distancing evident from both social media posts which circulated and which were reported to public representatives and the Gardaí over the course of Monday evening, it was agreed that the events were completely unacceptable.

"Many members of our community have made great efforts in the context of COVID-19 and the need for empathy and solidarity in that regard was emphasised."

Galway City Council also said it will continue to work closely with An Garda Síochána and, in particular, emphasise that drinking in public is contrary to Galway city bye-laws. 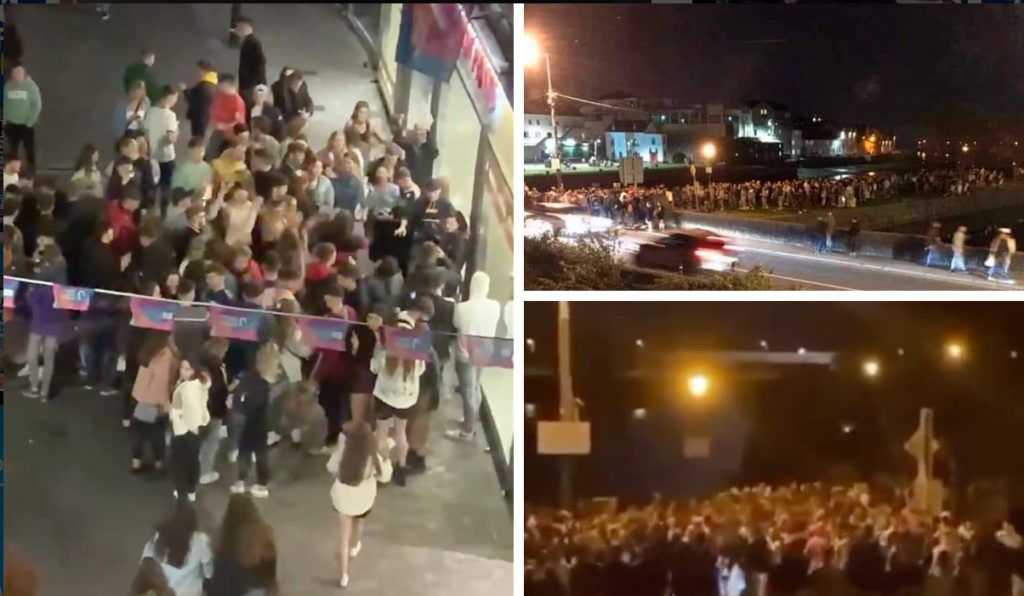 Footage of hundreds of people gathering in Galway city has gone viral amid rising COVID-19 cases in the county. Picture by: RollingNews.ie/Twitter

"The Gardaí are actively confiscating alcohol which is being consumed in public spaces and will continue issuing public notices which result in fines and possible court appearances", they added.

The group said it will meet again later in the week if needed.

"It's very worrying for the city, it's sending out the wrong message."

"I suppose from my own concerns as a public representative, the Gardaí need more resources.

"I contacted them on Sunday night... and there's continuous, over the last week, there's house parties - and they are under-resourced.

"They need back-up, they need support.

"I have spoken to leading people within the Government today to see can we get additional resources for the Gardaí."

"What I'm asking for and what I've requested is that Gardaí on their days off that they would be willing to come to the city and help the enormous pressure and the enormous workload that Gardaí have in our city".

Asked about the army, Senator Crowe said: "I think at this stage when we're going through this pandemic, once in a century unfortunetly, that all options have to be looked at."

"What I've called on the Department of Justice to do is to resource Galway city as the capital of the west the way they are resourcing Dublin city.

"And I have seen, in my role as a Senator, that the amount of Gardaí on the streets and their presensce on the streets in Dublin is welcome over the last few weeks."

'I would welcome it'

Galway chef and restaurateur JP McMahon said everything must be done to avoid another lockdown.

"I was fairly angry and annoyed and also just depressed - because again I think the strategy that we're persuing: this kind of open-closed-open-possibly closed again now, very little will affect these gatherings where drink is availbale.

"I do think we have to look at the off-licenses; they have been open for the pandemic, I think we've always had issues with alcohol and crowds.

"I think that's why the pubs still have the inability to open.

"But I mean I wouldn't be against the army coming in to Galway.

"If it's the difference between us closing again - now we've already lost one restaurant.

"Another lockdown is going to have a serious effect on us and our ability to keep on going."

"When you look at Italy and you look at different cities in Europe and they have brought the army in, I'm not looking for physical presence and guns and everything.

"But I just do think we need more manpower.

"If the pubs, restaurants and hotels are trying to create controlled environments and you have - essentially - a mini Ibiza happening in the Claddagh Basin with just 300 or 400 people, no lockdown is going to stop that".