Voting in the Conservative Party leadership contest among its 165,000 eligible members closed on Monday evening after a six-week campaign.

Following an overnight count, it was revealed that Mr Johnson was the clear winner between himself and the current foreign secretary Jeremy Hunt.

Mr Johnson will not actually take over until Wednesday.

In an acceptance speech, he said it was an "extraordinary honour and privilege" to be elected leader.

He also paid tribute to the outgoing Theresa May, thanking her for her "extraordinary service to this party and this country" and described his leadership opponent Mr Hunt as a "font of excellent ideas".

Comments from both Mr Johnson and Mr Hunt during the leadership campaign have raised concerns in Government circles here about the risks of a no-deal Brexit.

Both men have said they would take the UK out of the European Union without a deal if it comes to it. 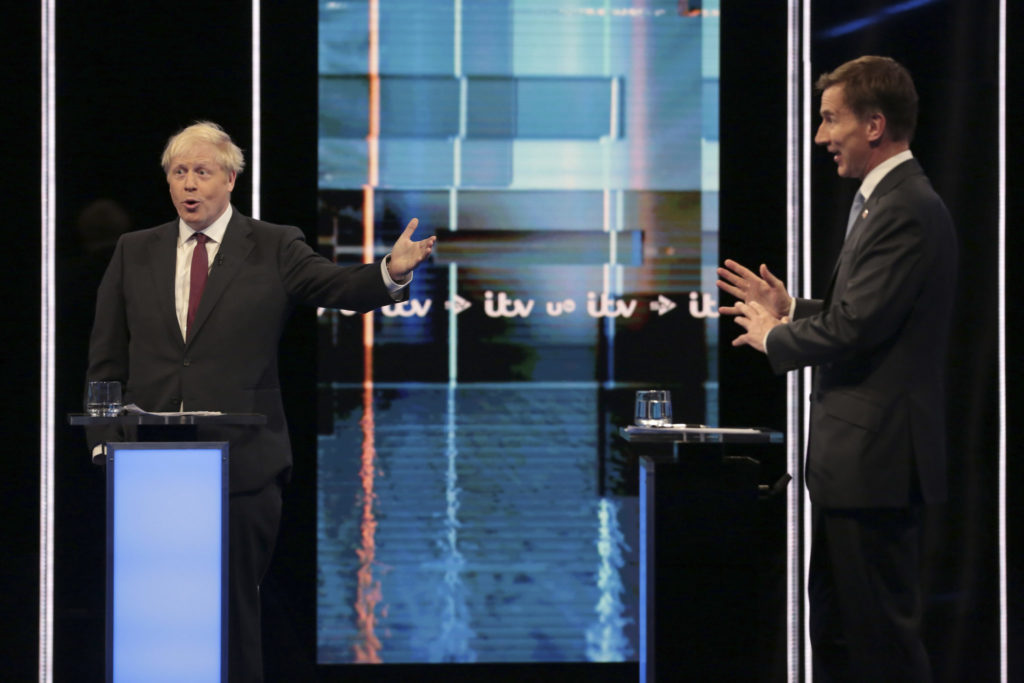 Mr Johnson vowed to take the UK out of the EU on October 31st "do or die", while Mr Hunt claimed his background as an "entrepreneur" made him the best candidate to negotiate Brexit.

Taoiseach Leo Varadkar has said he will look for an early meeting with the new prime minister following the election.

In a tweet this afternoon, the Taoiseach congratulated Mr Johnson and said he 'looks forward to an early engagement' on issues such as Brexit and Northern Ireland.

Congratulations to @borisjohnson on his election as party leader. Look forward to an early engagement on #Brexit, Northern Ireland and bilateral relations

Tánaiste Simon Coveney, meanwhile, said Ireland "will work constructively with him and his Govt to maintain and strengthen British/Irish relations".

"We are ready also to rework the agreed declaration on a new partnership in line with EUCO guidelines", he added.

We look forward to working constructively w/ PM @BorisJohnson when he takes office, to facilitate the ratification of the Withdrawal Agreement and achieve an orderly #Brexit. We are ready also to rework the agreed Declaration on a new partnership in line with #EUCO guidelines.

The incoming head of the European Commission, Ursula von der Leyen, congratulated Mr Johnson - saying she was looking forward to having a good 'working relation' with him.

She added: "There are many different and difficult issues to tackle together. We have challenging times ahead of us.

"I think it is very important to build up a strong and a good working relation - because we have the duty to deliver something which is good for people in Europe and in the United Kingdom."

Mrs May also sent her congratulations to her successor, adding: "We now need to work together to deliver a Brexit that works for the whole UK".

Many congratulations to @BorisJohnson on being elected leader of @Conservatives - we now need to work together to deliver a Brexit that works for the whole UK and to keep Jeremy Corbyn out of government. You will have my full support from the back benches.

UK Labour leader Jeremy Corbyn said the British people should decide their next prime minister in a general election.

He said: "Boris Johnson has won the support of fewer than 100,000 unrepresentative Conservative Party members by promising tax cuts for the richest, presenting himself as the bankers' friend, and pushing for a damaging No Deal Brexit.

"But he hasn't won the support of our country."

US President Donald Trump has  claimed "He will be great!" - however, Mr Johnson will not officially take office until Wednesday.

Speaking later, the US president said: "They call him 'Britain Trump' - people are saying that's a good thing.

"They like me over there... that's what they wanted. It's what they need. He'll get it done - Boris is good, he's going to do a good job."

When he becomes prime minister, Mr Johnson faces the threat of a collision course with the British parliament over a no-deal Brexit.

A massive problem for him is that he will have just a razor-thin majority.

After holding her last cabinet meeting on Tuesday, Mrs May will take her last prime minister's questions on Wednesday.

She will then head to Buckingham Palace to formally resign.

Mr Johnson will then make his own trip to Buckingham Palace to be invited to form a new government by Britain's Queen Elizabeth II.

It is likely he will then make a statement before stepping into Number 10 Downing Street.