The DSPCA is introducing a Pets At Work Program for companies

The DSPCA is calling on more employers to let staff bring their pets into the workplace as they go back to the office.

The animal charity is introducing a Pets At Work Scheme aimed to do just that.

The DSPCA, along with partners Purina, says employers and employees can achieve a pet-friendly workplace.

In 2020 Purina says a Pets At Work program was established in 209 companies.

"Modern life today is increasingly complex. Factors such as urbanisation, commuting and time spent online make it harder to keep and spend time with our pets", it says.

Breffni O'Dwyer is client director at Host and Company, and has been brining her dogs - Cooper and Sadie - into the office.

She told The Hard Shoulder this started from the top down.

"Sadie has been coming for the last four years... Tim McGee, our managing director, he had a beautiful dog called Bishop.

"They live in Youghal, but when Tim came to Dublin he'd always bring Bishop with him for years.

"So it was always a dog-friendly space; and I always wanted a dog.

"And he said 'Look, if you want a dog it's a dog-friendly office - you can bring the dog in'".

"We're just getting back to the office ourselves... I live about a half an hour from the office.

"We walk in, a half an hour into the office every morning, and they go and say hello to everybody - and they sleep.

"Anybody that has a dog knows that they sleep all day under your desk, they're super-chilled." 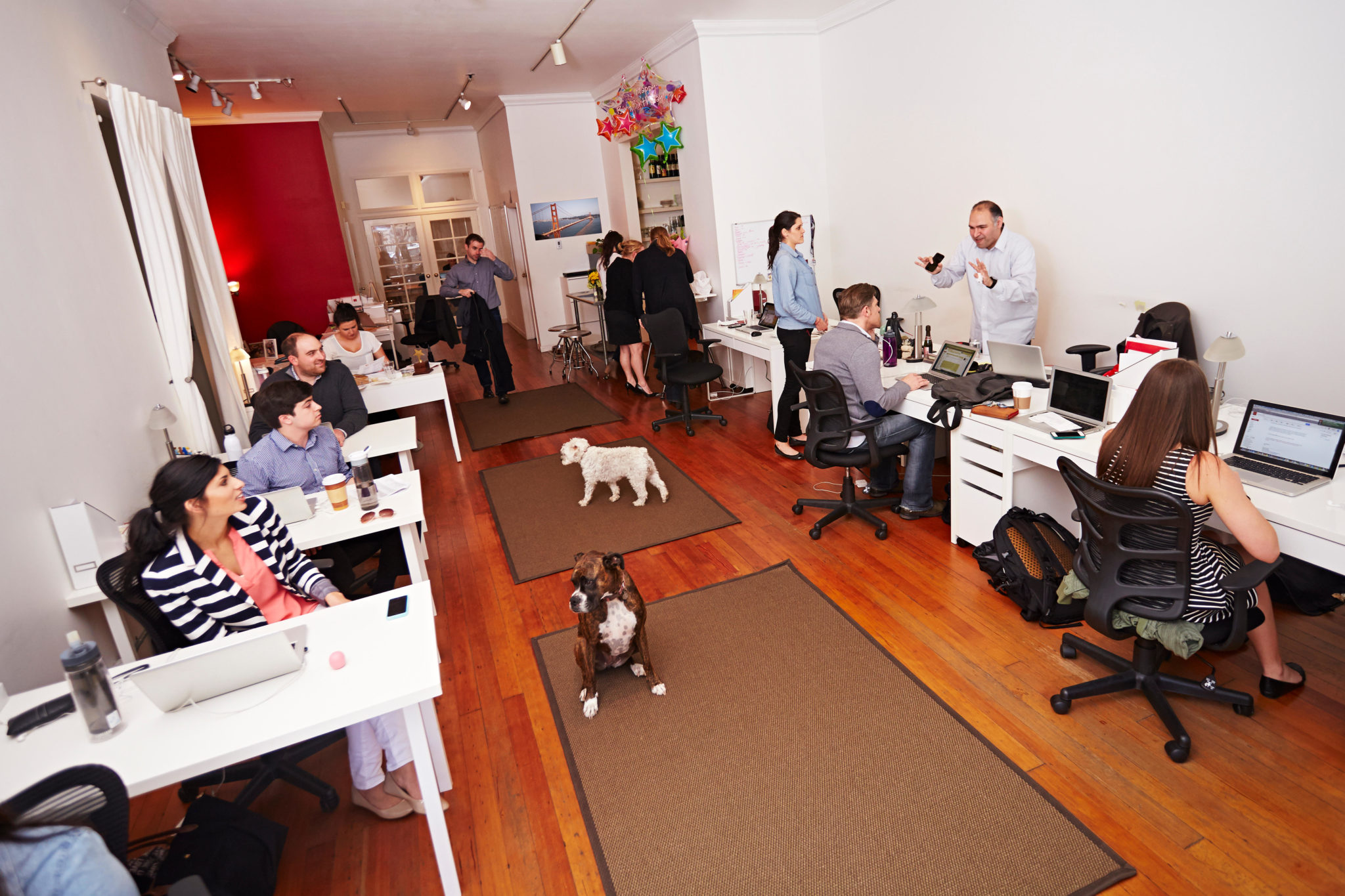 People at work in an office with dogs in April 2014. Picture by: Cultura Creative RF / Alamy Stock Photo

'Pop across the hall'

And she says they have had other pals to play with.

"At the moment they're the only dogs, so it's fine, it works for that reason.

"But our neighbours across the hall - Lotts Architects - they have a dog from the DSPCA, Penny.

"So prior to Cooper arriving, Sadie and Penny used to pop across the hall to each other all the time."

Asked about introducing other dogs, she says this is best in a neutral environment.

"It hasn't been an issue for us yet - I know that across the way one of the other girl's has gotten a dog.

"And they've started to introduce them in the park.

"So they go to Stephen's Green and they're doing little meet ups in that way to introduce them.

"Long-term, you hope they'll be able to be in the office together.

"But if they're not, I guess they work on different schedules - so they're in one day and work from home another".

As the workplace continues to evolve post-pandemic, will pets become the norm around the office? @Breffniellen (along with Sadie and Cooper 🐶 🐕) definitely believe so. @TheHardShoulder pic.twitter.com/69AT06QYhd

And she says they simply add to the workplace.

"They're not distracting - you regularly find pairs of legs sticking out from under your desk while people go by and have a chat with them.

"What they do is kind of ground you, they're so present - they're not worried about deadlines or RSVP lists.

"They're just in the now, so they kind of bring you out of your head - and they're like 'When you're there, give us a tummy rub and hold my paw for a bit'".

Breffni believes this will become more normalised, just like pets in hotels.

"I would imagine it will become the norm, when people see actually how... it is possible to do.

"The DSPCA have the programme to help people; it isn't a 'Let's all bring your dog and have a free for all'.

"People would have thought 'Oh God I'd never bring my dog away' and now that's just becoming so normal to do".