The withdrawal of NATO troops from Afghanistan was the “most significant foreign policy catastr...

The withdrawal of NATO troops from Afghanistan was the “most significant foreign policy catastrophe” the world has seen for decades, according to the Foreign Affairs Minister.

There are chaotic scenes at Kabul airport this morning as crowds of people seek to flee the country in the face of the Taliban advance.

Five people are reported to have been killed as hundreds of people try to board evacuation flights. It is unclear whether they were killed by gunfire or stampedes.

He said 15 of them are attempting to leave and Ireland was working with other EU states to try and get them home.

“I am very concerned,” he said. “This is chaos.

“We are seeing a country collapsing and I think you can only describe this as probably the most significant foreign policy catastrophe in the last 20 years, globally.”

He said the “brutality” of the Taliban’s reign the last time they were in power in Afghanistan is well documented.

“So many of the Afghan population now are in fear and desperate to get out,” he said.

“I think there are a lot of things that we don’t know in terms of what is going to happen in the coming days, weeks and months but I think we can be sure that we are going to see a lot more brutality and hundreds of thousands, if not millions, of refugees fleeing across borders.” 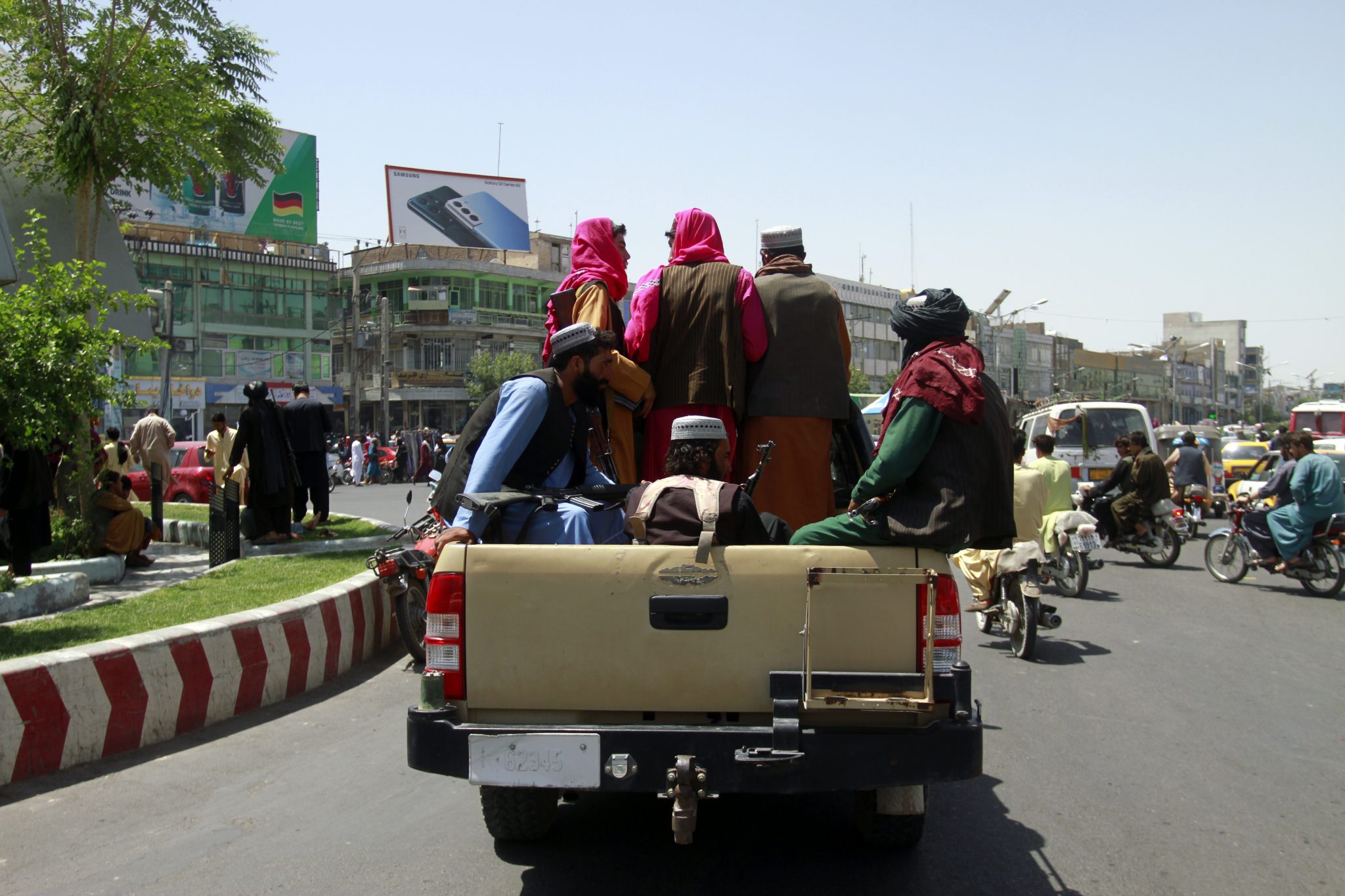 Taliban fighters sit on the back of a vehicle in the city of Herat, west of Kabul, Afghanistan, 14-08-2021. Image: Hamed Sarfarazi/AP/Press Association Images

Minister Coveney said today’s UN Security Council meeting will be about “emergency management” of the situation.

“It is about ensuring that there isn’t a mass slaughter of people who cooperated with western powers in recent years,” he said.

“There are thousands and thousands of Afghan interpreters who would have been working with the US and the UK and other NATO forces and of course many of them feel terribly at risk now.”

He said the withdrawal of NATO and US troops was “one of the most significant strategic errors in foreign policy that I can remember.”

“I think we can expect very significant and very tragic humanitarian consequences of what happened,” he said.

“This is a catastrophic foreign policy failure and we all need to work now to try to deal as best we can with the consequences of that.”

Since entering Kabul, a spokesperson for the Taliban has said the militant group aims to form an “open, inclusive Islamic government” in Afghanistan.

Minister Coveney said he does not see “any credibility” in the pledge – noting that he does not expect this Taliban leadership to be any different to the last.

“We already have a number of reports of brutality, arbitrary killings, people being stopped and searched, passports being burnt, girls not being allowed go to school and of course, this is only the start,” he said.

He said the group is made up of “essentially regional warlords” that have come together under one banner.

“They are Islamic fundamentalists,” he said. “They don’t believe in democracy or the rules of law.

“They believe in an extreme form of Islam that is brutal, that is violent, that is repressive – that treats women and girls as if they are not human beings.

“A country now is under the control of these people and it is understandable that you see scenes of chaos in Kabul airport as people desperately try to get out.”