Nine out of ten GAA players admit to binge drinking during the off-season, according to new resea...

Nine out of ten GAA players admit to binge drinking during the off-season, according to new research.

The report from the ESRI also showed that 75% of senior inter-county players "engage in potentially hazardous drinking" during the pre-season.

Despite this, it found that the proportion of such players who do drink alcohol is similar to the general male population who are around the same age.

In comparison, when senior players actually do drink, they tend to consume higher quantities.

"These high proportions of hazardous levels of drinking are a particular concern when considering the consequent harmful effects of alcohol misuse," the report states.

The study, 'Safeguarding amateur athletes: an examination of player welfare among senior inter-county Gaelic players' was commissioned by the Gaelic Athletic Association and the Gaelic Players Association.

It found that some participants believe that gambling "may be common among senior inter-county players".

Over 80% of the study's participants said they found it difficult to balance the demands of studying and playing during their third-level courses.

16% either dropped out of a course or had to repeat a year, while 80% missed some college classes.

When it comes to their careers, 25% of players reported choosing a profession after second-level education that would allow them to play senior inter-county.

This percentage was higher among top-tier players.

Additionally, over 40% would not select the same type of employment again.

Some players chose sectors with fewer working hours, such as education, which the report notes may adversely effect earnings as they experience lower promotion prospects. 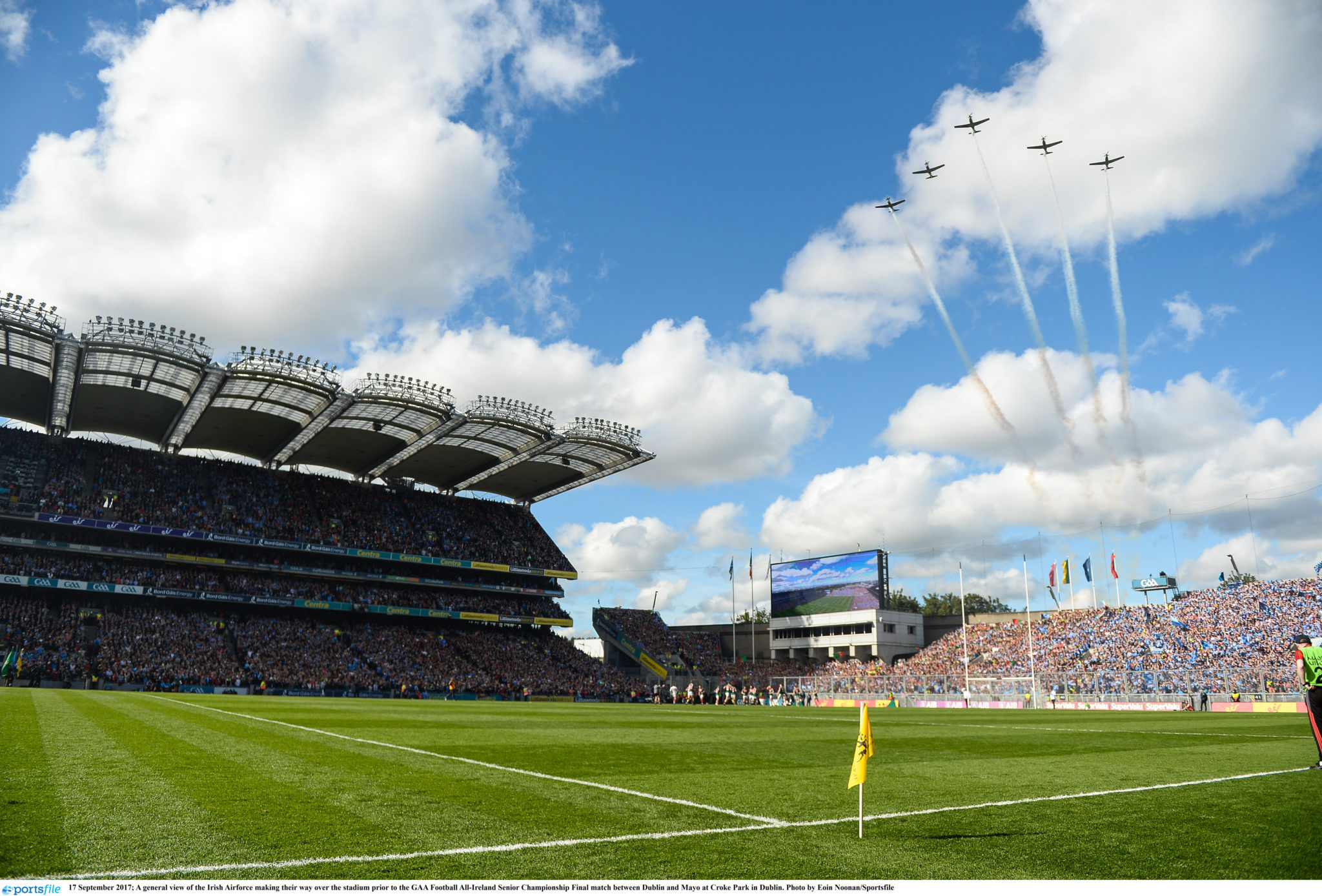 A general view of the Irish Airforce making their way over the stadium prior to the GAA Football All-Ireland Senior Championship Final match in 2017. Photo by Eoin Noonan/Sportsfile

With regard to health and well-being, almost 90% of players said they take supplements and are are recommended to do so by teams.

However, many source their supplements from outside of the inter-county set-up, such as on the internet, and only over half of players reported that supplement use is monitored within their team.

To improve the inter-county system, players said they would like to receive more support with regard to their professional careers and "how to keep their inter-county participation in perspective".

They said the issues they would most like to change about their inter-county experience would be a shorter season, fewer time commitments and the reintroduction of enjoyment into the games.

Elish Kelly, ESRI researcher and lead author of the report said: “Unless the underlying drivers that are giving rise to the current inter-county commitment levels are identified and addressed, the knock-on effects identified in this study are likely to be amplified among future generations of players.”

GAA President John Horan said that the report would help the organisation is improving their approach to player welfare both "on and off the field" while Paul Flynn, CEO of the GPA commented that the research will be "a valuable resource".

He added: “The report also underlines the need for a robust range of player development supports from the GPA.

"It shows us there is a growing need for more education and information for players about their roles and responsibilities as inter-county players, particularly around supplement usage and alcohol consumption.

“Encouragingly, our own research tells us that players who are actively engaged in their own personal development through GPA programmes are less likely to engage in risky behaviours in these areas and benefit from a better-balanced lifestyle.”

The report is the second ESRI study to examine how the commitment levels of the amateur sports affect players’ lives.

A total of 1,037 players submitted completed questionnaires for the research, which equated to a response rate of 53.7 % among a total of 1,947 senior inter-county players that year.

Ban on alcohol advertising near schools and playgrounds comes into effect