Over 80% of Irish people would vote to stay in EU, poll finds

A new survey has shown that, if a referendum on EU membership were held tomorrow, 83% of people i...

Over 80% of Irish people would vote to stay in EU, poll finds

A new survey has shown that, if a referendum on EU membership were held tomorrow, 83% of people in Ireland would vote to remain.

This is the second highest result in the EU, after the Netherlands.

The European Parliament survey found that 8% here would vote to leave the bloc, while 9% were not sure. 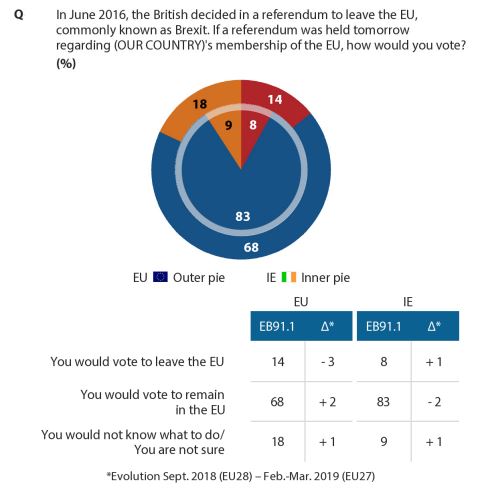 While the same question asked in Britain saw 35% saying they would vote to leave the bloc, 53% would remain and 12% were not sure.

The Spring 2019 Eurobarometer was conducted three months ahead of the European elections.

Some 68% of respondents across the EU27 believe that their countries have benefited from being part of the EU. 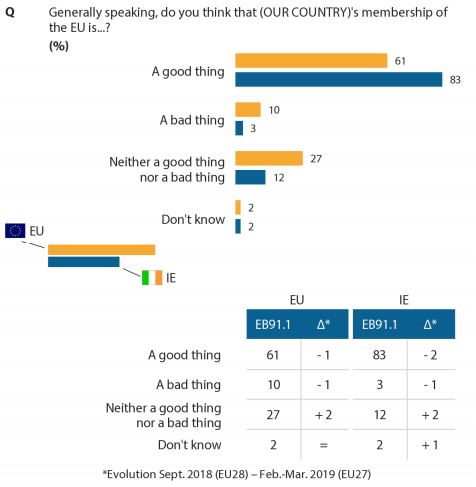 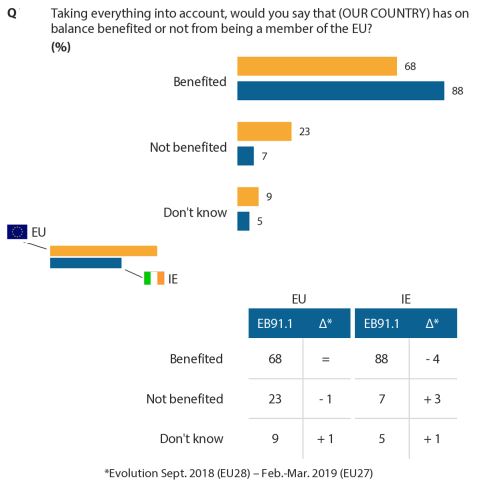 Throughout a series of election related questions, the study shows that Europeans have started pencilling the date of the ballot in their calendar.

The main reason cited to vote in the European elections for 44% of Europeans is because 'it is their duty' as a citizen.

Apart from this reason, there are five others cited by more than one-fifth of respondents - which all have to do with participation in democratic life.

Respondents would vote because they usually vote in political elections and because they feel they are citizens of the European Union.

Equally important voting drivers are that respondents feel they can change things by voting in the European Parliament elections, and because they want to support the European Union or a political party.

But despite the overall positive attitude towards the EU, the feeling that things are not going in the right direction in both the EU and in their own countries has increased to now 50% on EU average over the past six months.

Focusing on the past and future role of the European Parliament, the largest group of respondents (41%) believe that the parliament's role has stayed the same over the years.

Only one in five (21%) had the impression that the institution has strengthened its role, while 24% say the parliament's role has weakened during the past legislature.

This pattern is similar across all EU member states.

However, a majority of respondents would like to see parliament's role strengthened in the future (54%).

The Eurobarometer survey was conducted for the European Parliament by Kantar Public.

Some 27,973 respondents, drawn as a representative sample from the general population aged 15 or more, were interviewed face-to-face.