50 Years on from mankind's giant leap

July 20th, 2019 marks the 50th anniversary of the Apollo 11 mission and Neil Armstrong becoming the first human to set foot on the lunar surface.

Some 600 million people watched as he descended the ladder of the Apollo 11 LM Eagle and made his iconic statement,

That's one small step for man (a) man. One giant leap for mankind

(There's some discrepancy over the exact words he uttered which you can read about over at space.com)

We've gathered together a whole host of lunar links to help you celebrate one of humanity's greatest achievements.

This week's Futureproof is a very special show which brings home the sheer audacity of the Apollo 11 mission. We hear about Ireland’s very own piece of the moon and why the 1969 mission wasn’t actually our first successful moon landing.

One of the many objects taken to the Moon during the Pollo 11 mission was a message from then-President Éamon de Valera.

Press release of the text of message from @PresidentIRL Éamon de Valera carried to moon by #Apollo11 - the last clause was an addition to Aiken's initial draft #Apollo50th #Apollo50 @RIAdawson @dfatirl (NAI 2009/115/71) pic.twitter.com/HxHj7ttj9m

Find out the full details of the message here.

Shane Hannon, assistant producer on Off the Ball, is a self-titled space nerd. You can Shane's article on the moon landings here.

Listen back as he describes his lifelong obsession with the Apollo missions and space research.

As we celebrate the 50th anniversary of the Apollo 11 mission, we look to the future with Alyssa Carson. Alyssa has a big dream; she would like to be one of the first Astronauts to set foot on Mars. You can read all about Alyssa's quest here.

The Irish Man Who Worked On Apollo 11

Pat Norris joins Sean Moncrieff to talk about his work on Apollo 11. He is also the author of Returning People To The Moon After Apollo.

Listen back to the podcast: 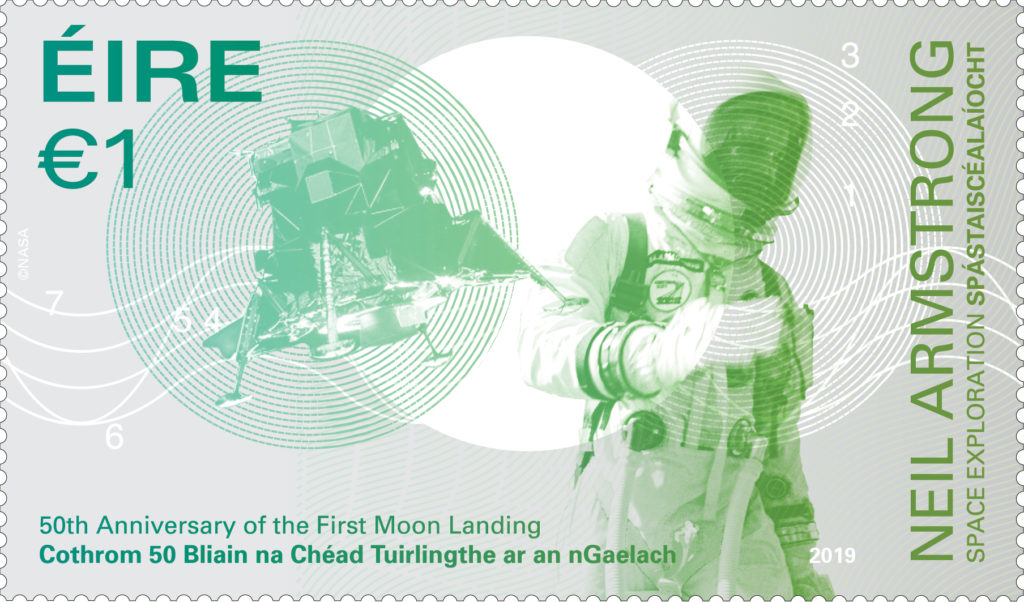 To mark the 50th anniversary of the first Moon landing, An Post have released a new series of stamps celebrating US astronauts of Irish ancestry.

You can read all about the new collection here.

Hidden Histories: Space and Us

Donal Fallon talks us through Ireland's reaction to the moon landing all those years ago.

The look was achieved through a projection of a full-sized, 363-foot Saturn V rocket.

Details of the transformation here.

Google's latest Doodle takes us through the journey to the moon and back and is narrated by someone with firsthand knowledge of the epic event, Apollo 11 command module pilot Michael Collins.

Consisting solely of pristinely restored footage taken at the time of the mission, this 2019 documentary takes you on a visceral ride along with the crew of Apollo 11.

Sam Neil stars in this drama/comedy about a remote Australian community that played a key role in the moon landing.

A fascinating 2007 documentary in which the crew members of NASA's Apollo missions tell their story in their own words.