A further 49 COVID-19 patients have died in the Republic taking the death toll to 769. Meanwhile,...

A further 49 COVID-19 patients have died in the Republic taking the death toll to 769.

At a briefing this evening, the Chief Medical Officer Dr Tony Holohan said 10 deaths previously linked to the virus have now been classed as unrelated and the new death toll reflects the change. 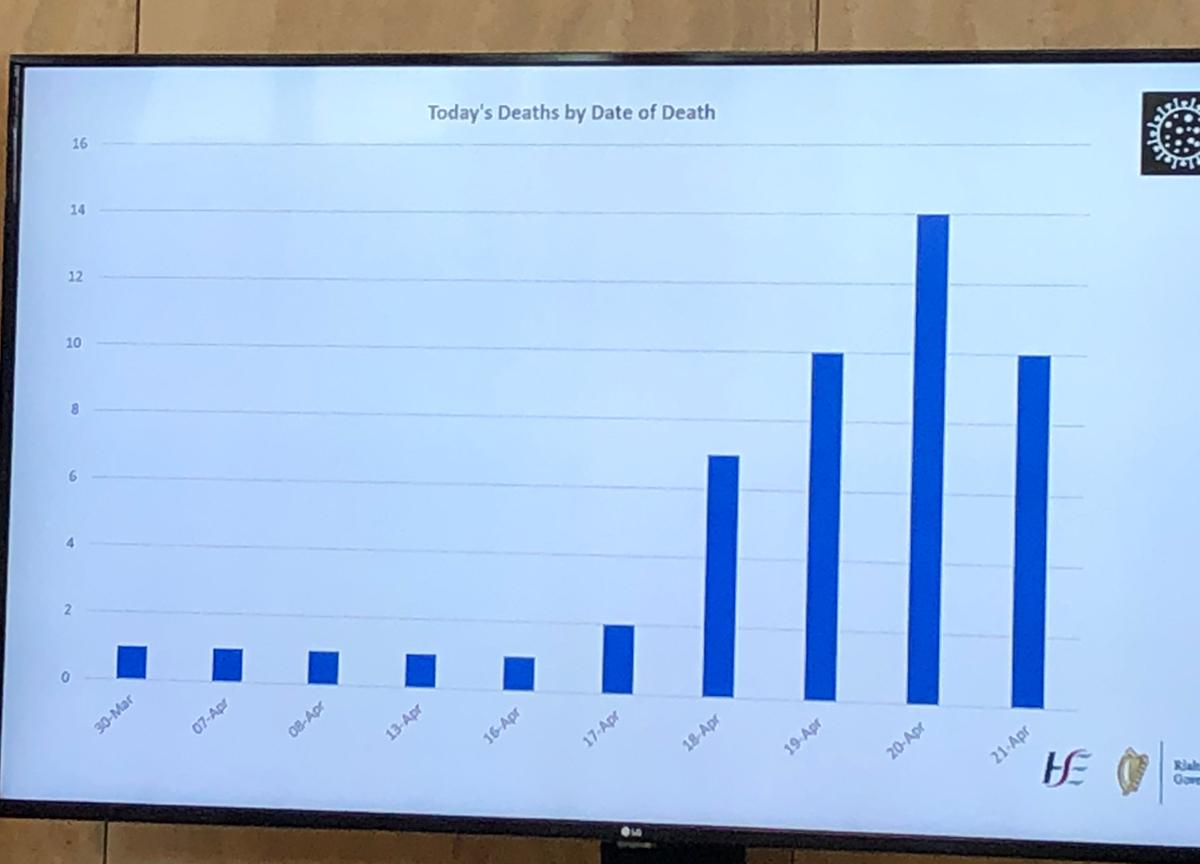 COVID-19 deaths announced on 22-04-2020 broken down by date of death. Image: Shane Beatty/Newstalk

He said just over half the deaths (386) recorded in the country so far occurred in a hospital setting, with 6.5% occurring in the Intensive Care Unit.

Some 84% if the people that have died were suffering from underlying health issues.

The average age of the people who have died is 69-years-old and the median is 83-years-old.

The patients to have died so far range in age from 23 to 105-years-old. 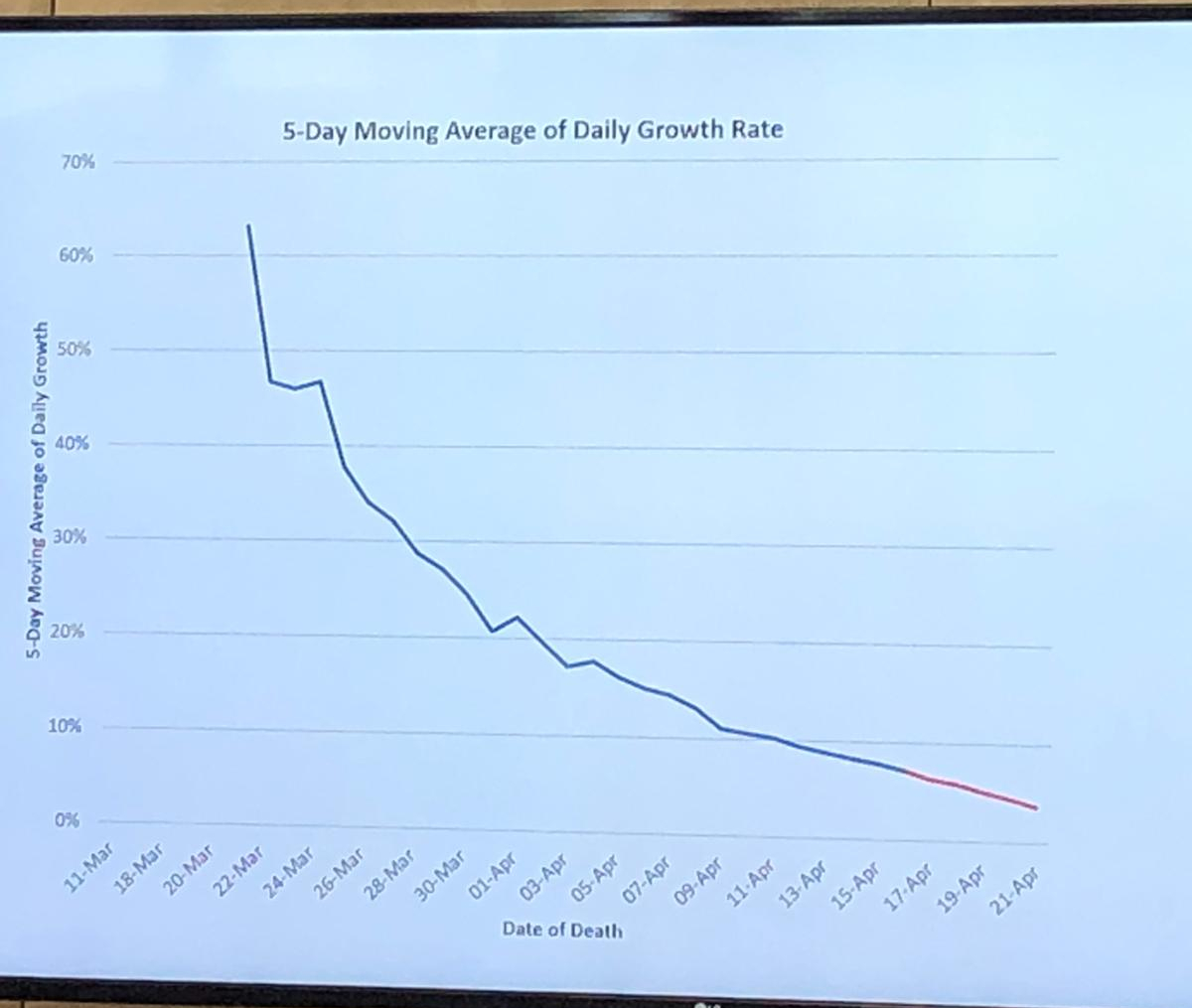 The growth rate of the virus over the past five days. Image: Shane Beatty/Newstalk

As of midnight on Monday 20th April, some 15% of the country’s COVID-19 patients had been hospitalised and 322 (2%) had been admitted to intensive care.

Some 147 people remain in intensive care and 130 had been discharged.

Healthcare workers accounted for 27.7% of the country’s patients with women making up 56% of them.

.@CMOIreland gives the age distribution of the 769 deaths from COVID-19 so far. pic.twitter.com/6WHQmcqs2h

ON Tuesday 21st April, there were 302 clusters of the virus in residential care settings around the country, 179 of them in nursing homes.

Around 10% have been hospitalised with their symptoms.

More than half the deaths recorded in the Republic so far have been in residential care settings, with 348 (45.3%) recorded among nursing home residents.

Dr Holohan said he is “very concerned” about the prospect of people starting to move around more ahead of the planned May 5th deadline for easing restrictions.

“We can’t stress highly enough the importance of staying the course and continuing the high levels of compliance that we have seen across the population to get us in as strong a position as we can be as soon as possible and certainly by May 5th,” he said.

“If the decision, if you like, was due today, we have not reached a point where we think we could be recommending a change in the restrictions.

He warned once again that the virus is “very transmissible” and if the growth rate goes back above 1% we will be “back on a path where we will be impacting out healthcare capacity, we will be impacting more importantly the health and wellbeing of people in the population we can prevent from picking up this illness.”

“We need to stay the course; we need to keep working with this,” he said.

“We think within a period of two to three weeks, we could start to see very significant change in terms of the path of this infection.

“The strong message to people is let’s keep it up right to the very end to get as far as we can with the improvements we have seen.” 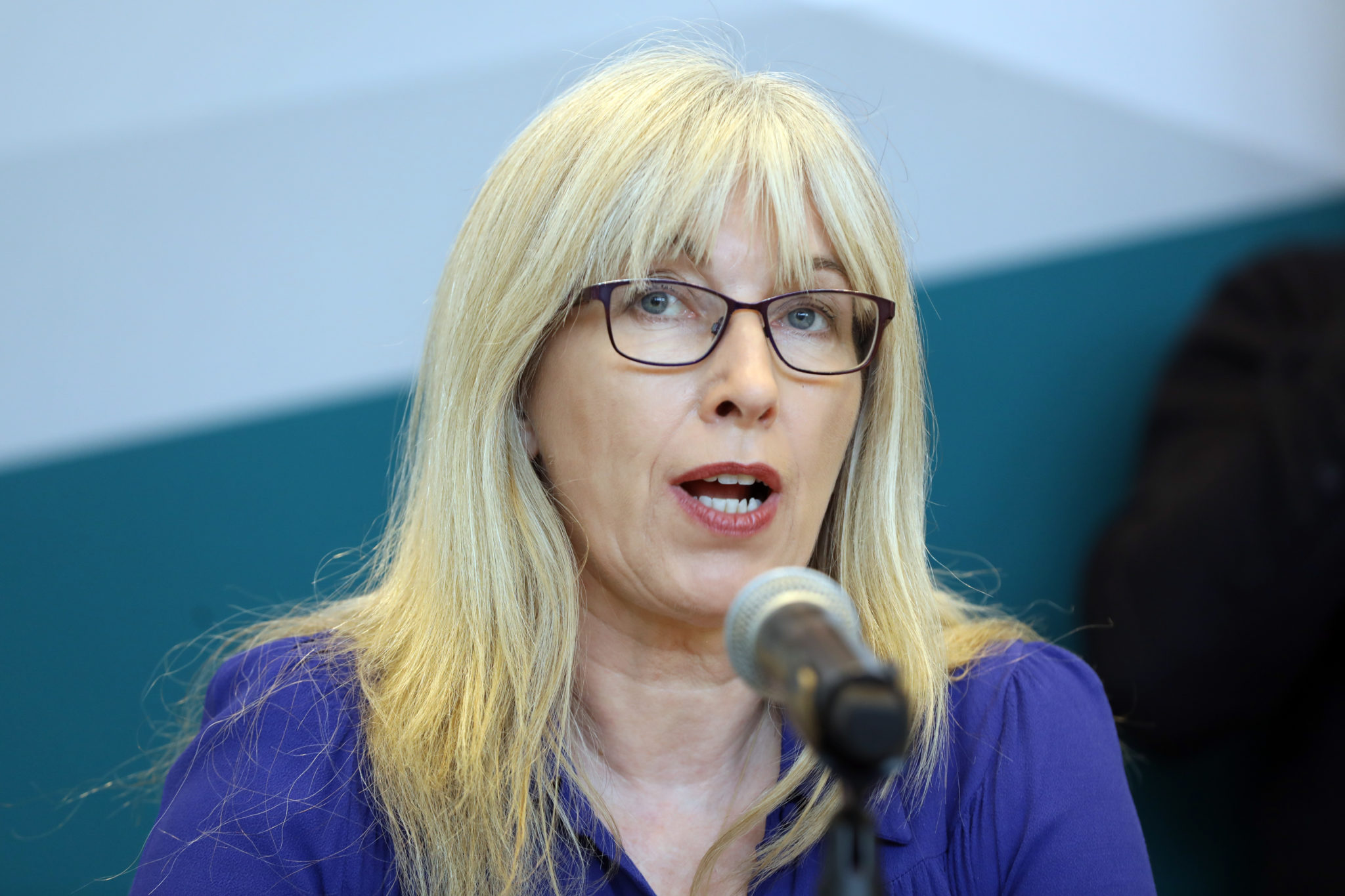 Dr Holohan said the National Health Emergency Team has asked HIQA to undertake an assessment of alternative testing methods for the virus.

HIQA Deputy Chief Executive and Director of Health Technology Assessment Dr Máirín Ryan said: “We have identified a range of diagnostic tests, both in development and already commercialised, that will need to be reviewed as part of a comprehensive quality assurance programme before being adopted as part of a national testing programme.

“The assessment has confirmed that Ireland’s current test, the real-time RT-PCR, remains the ‘gold standard’ test for detecting and confirming COVID-19 cases.

"HIQA continues to monitor and assess evidence on alternative diagnostic testing methods for COVID-19 and will report to NPHET on an ongoing basis.”