New Zealand's prime minister has pledged gun laws in the country will change after at least 49 pe...

New Zealand's prime minister has pledged gun laws in the country will change after at least 49 people were killed in the attacks at two mosques in the city of Christchurch.

More than 40 others were seriously injured in the terror attacks, and two people are in critical condition.

A five-year-old child has been transferred to a hospital in Auckland for treatment.

One 28-year-old Australian man has been charged with murder and appeared in court on Saturday morning (New Zealand time).

The 28-year-old man charged with murder in relation to this attack has appeared in Christchurch District Court this morning.

New Zealand Police said: "While the man is currently facing only one charge, further charges will be laid."

Two other people remain in custody.

At a news conference, Police Commissioner Mike Bush said a number of improvised explosive devices were also found attached to vehicles in the city.

He said they have since been made safe.

In an update on Saturday morning, Commissioner Bush added: "I want to reassure all New Zealanders that we are doing absolutely everything in our power to respond to this attack, and deploying all available resources in communities across New Zealand.

"There is a heightened police presence around the country, including at mosques and community events."

"Our gun laws will change"

In a press conference on Saturday morning local time, she said the man charged with murder was not a resident of Christchurch. 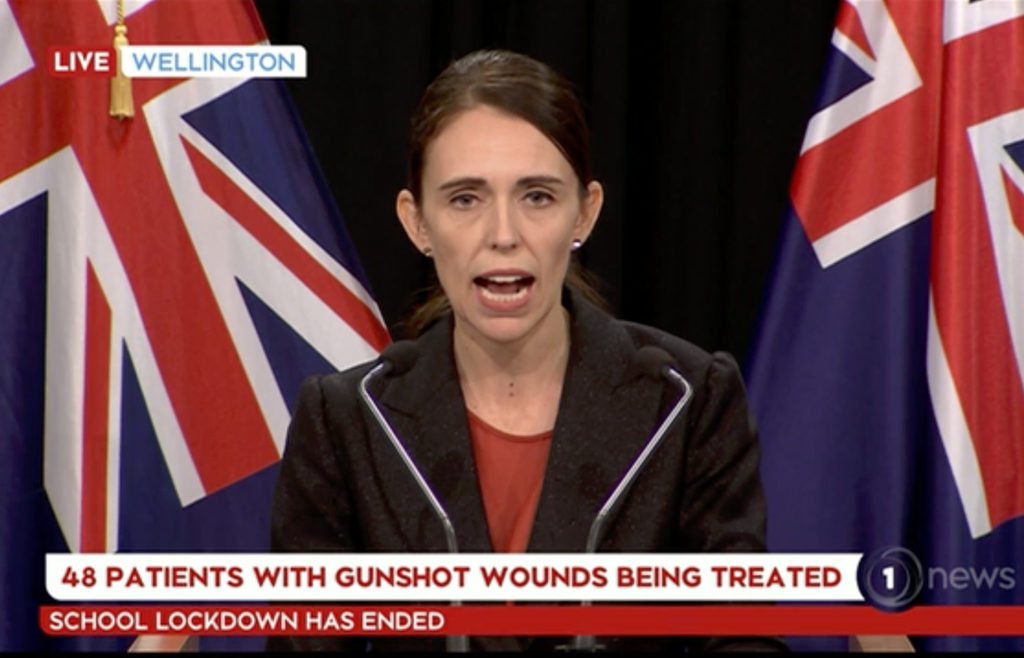 In this image made from video, Prime Minister Jacinda Ardern gives a press conference from Wellington, after the shootings at two mosques in Christchurch, New Zealand, Friday, March 15, 2019. Ardern said the values of her country would not be "shaken" by the deadly attacks that left dozens dead. (TVNZ via AP)

She explained: "This individual has travelled around the world, with sporadic periods of time spent in New Zealand.

"None of those apprehended had a criminal history either here or in Australia... and they were not on any watchlists."

She insisted that police are focused on tackling far-right extremism, and officials are now investigating whether any material on social media should have triggered a response.

Ms Ardern noted that the suspect had a gun licence that was acquired in November 2017.

She added: "I'm advised there were five guns used by the primary perpetrators - there were two semi automatic weapons, and two shotguns.

"While work is being done as to the chain of events that led to both the holding of this gun licence and the position of these weapons, I can tell you one thing right now: our gun laws will change."

"There has been some absolute acts of bravery. I am hugely proud of our police staff about the away they have responded to this."

"But lets not assume that the danger is gone." 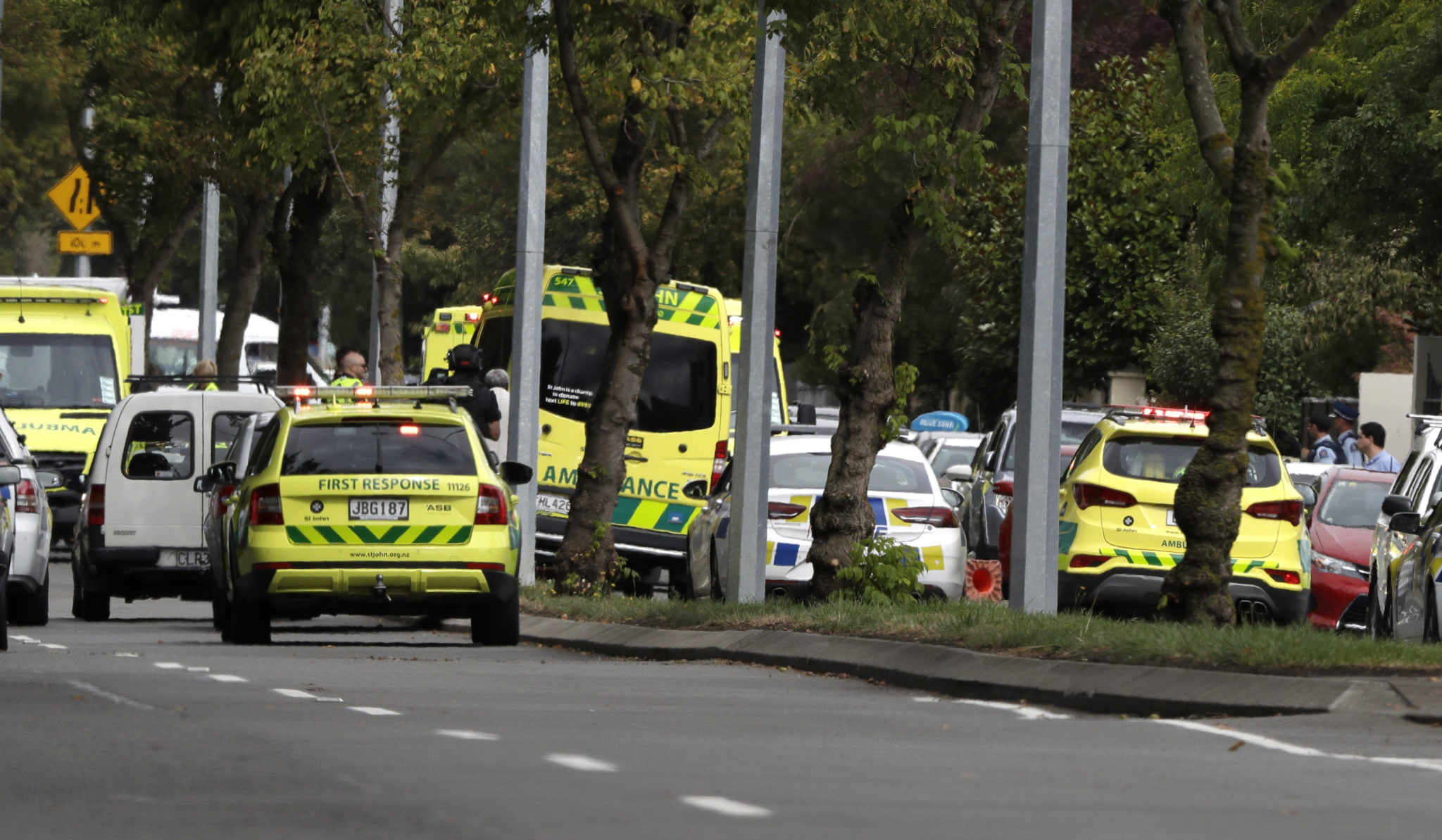 Mosques have been told to close across New Zealand after the attacks and the public were urged to remain indoors on Friday.

In Ireland, gardaí said local units would attend Friday prayers in mosques around the country and would be "making themselves available" to provide support to the Muslim community.

To provide support to the Muslim community in Ireland after the terrible events in New Zealand, community Gardaí will be attending Friday prayer in their local mosque and making themselves available to those communities.

The President Michael D. Higgins led the Irish tributes to the dead, saying the attacks had “appalled people all over the world.”

What has happened in Christchurch is an extraordinary act of unprecedented violence. It has no place in New Zealand. Many of those affected will be members of our migrant communities – New Zealand is their home – they are us.

On Friday, Ms Ardern described the shooting as an "extraordinary, unprecedented, act of violence."

“It is clear this is one of New Zealand's darkest days,” she said.

“Many of those affected might be migrants to New Zealand. They have chosen to make New Zealand their home and it is their home.

“There is no place in New Zealand for such acts of extreme and unprecedented violence which it is clear this act was.”

She said the attacks were carried out be people who have "extremist views that have absolutely no place in New Zealand and, in fact, have no place in the world."

Australian prime minister Scott Morrison confirmed that one of the suspects is an Australian-born citizen. He said he was an "extremist, right-wing, violent terrorist."

Irish Citizens in #Christchurch who need to contact the Embassy can do so on
04-4712252.
The Embassy is touch with the New Zealand authorities & is monitoring the situation. @irlnz1

The Irish Embassy in Wellington has published a number for any Irish citizens who need to contact them can call.

The Embassy said it is "in touch with the New Zealand authorities & is monitoring the situation."

The attacker is believed to have live-streamed at least one of the attacks - filming as he entered a mosque with his weapon drawn.

Police are urging the public not to share the footage.

Horrific, harrowing news from New Zealand. We stand with the people of Christchurch & NZ at this unimaginably difficult time. Tolerance & openness will overcome hate.

The Taoiseach Leo Varadkar said the Government stands with "the people of Christchurch and New Zealand at this unimaginably difficult time."

Describing the events as "'horrific, harrowing news," he said that "tolerance and openness will overcome hate."

Our thoughts, sympathy and prayers are with the people of #NewZealand as such shocking and tragic news continues to come from #Christchurch - Ireland is with you in every way we can be!

"There can be no justification for acts of violence and discrimination based on religion or beliefs," he said.

"Freedom of religious expression is a cornerstone of any functioning democracy and those rights must be guaranteed for all citizens.

"Ireland will continue to stand in solidarity with all the people of New Zealand."

New Zealand's ambassador to the EU David Taylor was noticeably upset when he addressed the incident at an event in Dublin this morning.

“I think New Zealand is reeling from this but, as the Prime Minister said, New Zealand represents diversity, kindness and compassion,” he said.

“We are a home to those who share our values and a place of refuge for those in need and that will not change.”

“We will stay as strong as we have been and will go forward from here.”