A frantic search operation is under way for people trapped under snow in Turkey, after an avalanc...

A frantic search operation is under way for people trapped under snow in Turkey, after an avalanche killed 38 people during a rescue mission following an earlier avalanche.

Both disasters struck a road near the mountain-surrounded town of Bahcesehir in Van province, in eastern Turkey, on the border with Iran.

Hundreds of emergency workers had been sent to the site to rescue two people missing after the first avalanche struck on Tuesday, killing five people.

Those who died in the second avalanche on Wednesday included military police officers, government-paid village guards, firefighters and volunteers.

Authorities said 30 people had been rescued from under the snow and taken to hospital on Wednesday - but more people are believed to be trapped. 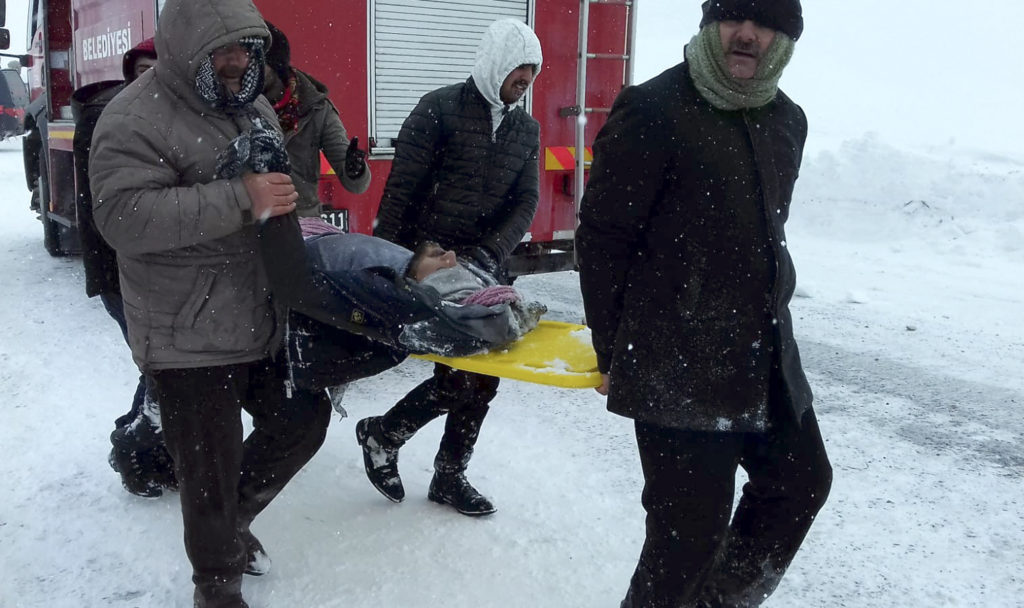 Emergency service members carry a casualty at the site of avalanche near the town of Bahcesehir, in Van province, eastern Turkey | Image: Yilmaz Sonmez/AP/Press Association Images

The Irish embassy in Ankara offered its condolences to Turkey, tweeting in both English and Turkish.

It said: "Our thoughts are with the families of the victims of the avalanches in Van, especially those who were there in a rescue capacity."

Turkey's interior Minister Suleyman Soylu said the conditions in the area were making the rescue operation difficult, adding that a vehicle had been pulled out from under four to five metres of snow.

The first avalanche on Tuesday buried a snow-clearing vehicle and a minibus.

The state-run Anadolu news agency said the vehicle's operator was trapped beneath the snow for some 25 minutes before he managed to break a window and escape.

The agency quoted him as saying that he walked towards a village before he was picked up by a vehicle and managed to seek help.