169 million children worldwide have missed out on the measles vaccine in the last eight years. Th...

169 million children worldwide have missed out on the measles vaccine in the last eight years.

The UN children's agency UNICEF said the falling uptake between 2010 and 2017 has led to the current outbreak affecting many countries.

It means an average of more than 21 million children a year are missing out on the first dose of the vaccine.

In the first three months of this year, more than 110,000 measles cases have been reported worldwide - a 300% increase on the same period last year. 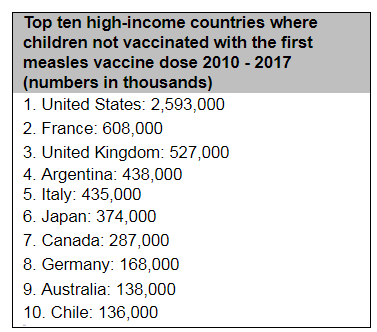 In Ireland, the number of cases has gone up by over 200% in the last three years.

Executive Director of UNICEF Ireland, Peter Power, said it's a worry even in developed countries.

He said: "In Ireland, for example, the cases of measles have doubled in the last three years.

"There is no excuse for parents not having their children vaccinated against measles.

"It's a very serious disease - children can die if they contract measles. The vaccine is extremely effective, and we encourage all parents to have their children vaccinated."

The HSE, meanwhile, said Ireland has experienced its own measles outbreaks - including 48 cases reported in the first 15 weeks of this year.

Head of the HSE National Immunisation Office, Dr Lucy Jessop, said the MMR vaccine is the only protection against the disease.

She explained: "While uptake in Ireland has remained steady at around 92%, we need to increase uptake rates to the target of 95% to make sure that measles does not circulate here.

"This is important for everybody but is particularly vital to protect young babies as they cannot receive the MMR vaccine until they are 12 months old."

She added that vaccines are a "simple, effective and safe way" of preventing serious illnesses and saving lives.