Gardaí believe the 16 men found in the back of a lorry on a ferry to Rosslare were in the contai...

Gardaí believe the 16 men found in the back of a lorry on a ferry to Rosslare were in the container for between 10 and 12 hours.

The men, who are understood to be Middle Eastern and aged between 20 and 35, were discovered Thursday morning on a Stena sailing between Cherbourg in France and Rosslare in Co Wexford.

One of the men may be a teenager, which has yet to be confirmed.

The articulated truck, which is owned by a Wexford company, has been removed for a forensic examination.

Gardaí say the driver and the owners of the vehicle are assisting with their enquiries.

The driver is a man in his 50s who is described as "a long time employee" of the company.

Gardaí say he has lived in Ireland for over 25 years and is co-operating fully with the investigation, as are the owners of the firm.

All 16 men were taken off the ferry at Rosslare and are being transferred to a Dublin reception centre.

Gardaí say they are investigating 'all circumstances' of the discovery.

Earlier Gardaí and emergency services boarded the Stena Line ship to meet the group, who were discovered by an employee on Wednesday night's sailing.

The Stena Horizon arrived to stormy coastal conditions just before 3.00pm on Thursday.

The Stena Horizon with 16 people who were found alive in the back of a lorry has arrived at Rosslare. Gardaí and emergency services personnel have gone on board now... pic.twitter.com/JiDGsrB4m7

On board, 16 people were found alive in the back of a lorry by a Stena employee during a routine inspection.

They were taken out of the sealed container and given blankets and refreshments.

He says: "They're in excellent condition - they were medically assessed and they're all proved to be medically sound.

"I visited myself on the Stena Horizon and they're in good spirits and good health.

"None of them seem to be in too much distress - they were speaking to us and they're just generally in good health, good spirits". 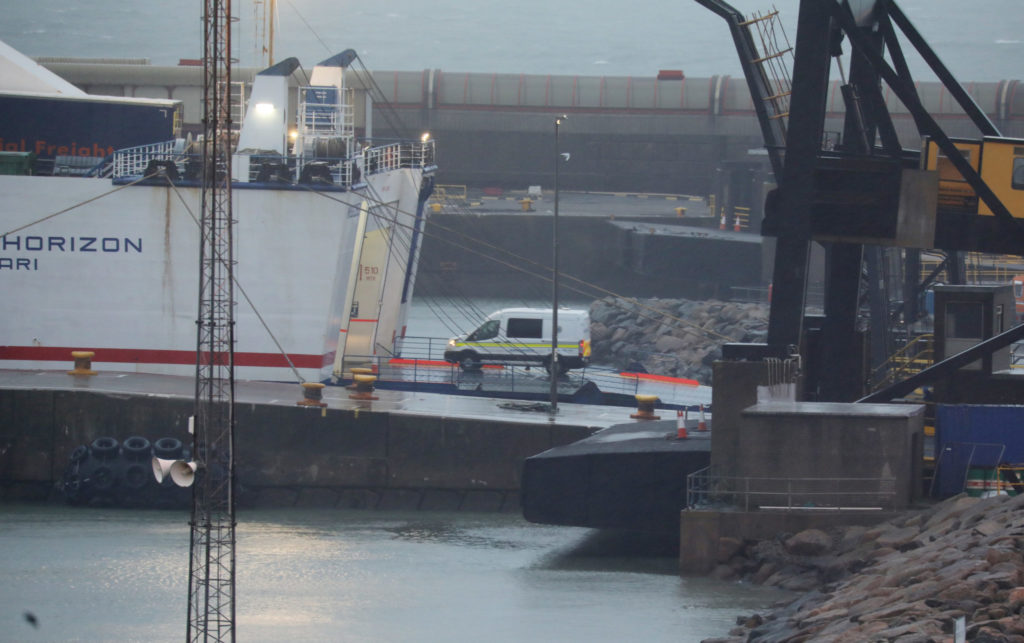 A Garda van approaches the ferry where up to 16 people have been found in the back of truck on a ferry | Image: Eamonn Farrell/RollingNews.ie

Shortly after the ship arrived, Gardaí along with ambulances boarded the ferry - while other trucks and vans disembarked.

An Garda Síochána say they are investigating potential breaches of immigration legislation which may have occurred on board the Stena Line ferry.

The captain of the ferry alerted Gardaí that "a number of people" had been discovered in the trailer of an articulated tractor unit on the vehicle deck at approximately 9.45am on Thursday morning.

Gardaí updating on the 16 males discovered in the back of a lorry on a ferry coming from Cherbourg to Rosslare. Believed to be in the container for 10-12 hours. All in good spirits and good health. pic.twitter.com/9iolPGTxya

Garda Immigration Officers attached to Wexford Garda station, supported by the Garda National Immigration Bureau (GNIB), are carrying out an assessment on the immigration status of all the people.

An Garda Síochána says it is investigating all circumstances of this incident.

In a statement, Justice Minister Charlie Flanagan says: "I was extremely concerned to learn of another incident of people being found in a sealed lorry container, on this occasion on board a ferry.

"There is an active Garda investigation underway and I would appeal to anyone with any information on these nefarious activities to come forward.

"I welcome the statement issued by An Garda Síochána earlier today.

"The persons found in the lorry container are now being cared for by State services.

"As part of that care, they will receive initial medical assessments."

Main image: An ambulance on the ferry where up to 16 people have been found in the back of truck on a ferry | Image: Eamonn Farrell/RollingNews.ie