Newstalk presents a new drama for radio ‘AN END OF TERM’ written and produced by Noel Kelly. ...

A play for radio.

Newstalk presents a new drama for radio ‘AN END OF TERM’ written and produced by Noel Kelly. 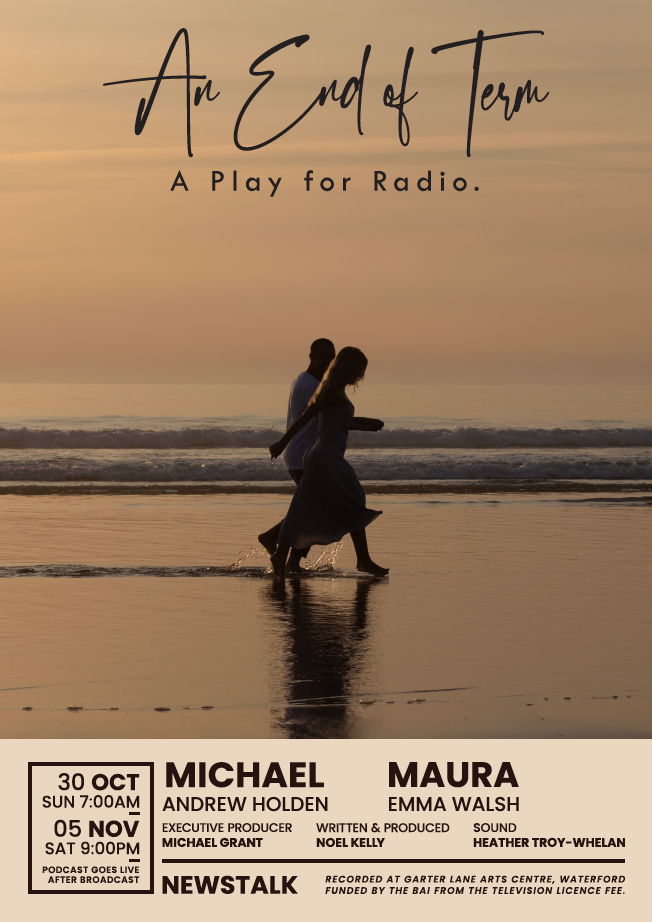 Set in Waterford city, ‘An End of Term’ charts the decline of a marriage. Following a series of frustrating Counselling sessions and a series of uncomfortable telephone conversations, Michael , a school teacher and his wife Maura, a Hairdresser, attempt to reconnect their increasingly diverging lives. However, in doing so, all they reveal are milestones on the path of their declining relationship. When an ongoing illness adds further to their problems, attempts at a ‘last chance’ reconciliation may prove to be a final solution or a final straw…

‘ Never turns out the way you thought it would…Does it?…Life! ‘

An End of Term will premiere on Newstalk on Sunday October 30th at 7am, repeated Saturday November 5th at 9pm and will be available as a podcast on GoLoud and all major podcast platforms.

‘An End of Term’ is one of a Trilogy of plays. IMRO Bronze Award winning ‘Terms and Conditions’(2017) and ‘Mid Term Break’(2021) were previously produced for Radio. Executive Producer, Michael Grant brings together a talented and widely experienced cast for the final play. Andrew Holden and Emma Walsh are two of Waterford’s finest actors.

AN END OF TERM was written and produced by Noel Kelly and was supported by a grant from the Broadcasting Authority of Ireland, as part of the Sound and Vision scheme.