Documentary On Newstalk: Breast Cancer and Me

This weekend, Documentary on Newstalk airs Breast Cancer and Me.  Journalist Sinead Aherne was ...

Documentary On Newstalk: Breast Cancer and Me

This weekend, Documentary on Newstalk airs Breast Cancer and Me.

Journalist Sinead Aherne was diagnosed with breast cancer in March of 2017.

The Cork native has lived in Waterford since 2008 and was one of 194 new diagnoses of the disease at University Hospital Waterford that year.

Breast Cancer is one of the most common types of cancer in women in Ireland. Most are over 50, but younger women can also get the disease too. Sinead was 32 when she was diagnosed.

Produced and presented by Sinead Ahern, ‘Breast Cancer and Me’ explores life with cancer and life afterwards.

Sinead speaks to the medical professionals who treated her, her parents who supported her throughout and three strong young women from the South East who also got breast cancer in their 30’s.

It covers the treatments, the side effects, the fear of recurrence and the impact it has on fertility.

‘Breast Cancer and Me’ originally aired on WLR and was awarded silver in the documentary category at the 2020 IMRO Radio Awards. And was funded by the Broadcasting Authority of Ireland with the television licence fee 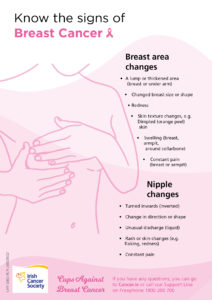