A number of women have spoken out about their experiences of sexual harassment in the rental sect...

A number of women have spoken out about their experiences of sexual harassment in the rental sector.

Solidarity TD Ruth Coppinger raised the issue in the Dáil last week – after she was approached by a woman whose landlord offered her a "sex for rent" deal when she couldn't afford to remain in her home.

At a press conference this morning, she said she has had a “huge reaction” to the revelations in the days since.

She said a ‘many women’ have come forward with stories of unwanted sexual attention and abuse – often just to be allowed to stay in their in their homes after paying their rent in full.

Here are some of the tenant testimonies and a text exchange with a landlord and lodger. #SexIsNotRent#dubw pic.twitter.com/0vvdUgsmlf

She said the majority are renting in the HAP (Housing Assistance Payment) sector, which she said is “not only uneconomical for the taxpayer, but lends itself to abuse as it is the tenant who must source the property.”

She said women have sent her testimonies outlining how landlords have:

Deputy Coppinger was joined at the press conference by single mother Kirsty Cyane-McGill who said she was sexually harassed by an estate agent while trying to land a HAP tenancy.

She said after 10 months of facing homelessness and “uncountable rejections” from landlords and estate agents she finally found a home that accepted the payment.

“Then the estate agent began showing red flags,” she said.

“Asking to meet me at the property to ‘see how well I kept it,’ to offers of celebratory drinks on signing my lease, to jokes about candlelit dinners.

“Terrified in my own home”

She said “things quickly changed” when she challenged him on things like broken heating at the property.

She said he twice turned up at her doorstep with a notice to quit – one of which it turned out the landlord had no knowledge of.

She said he refused to leave the house despite her asking him multiple times.

“I was terrified in my own home that his man, who was so unpredictable, had a key to my house,” she said. 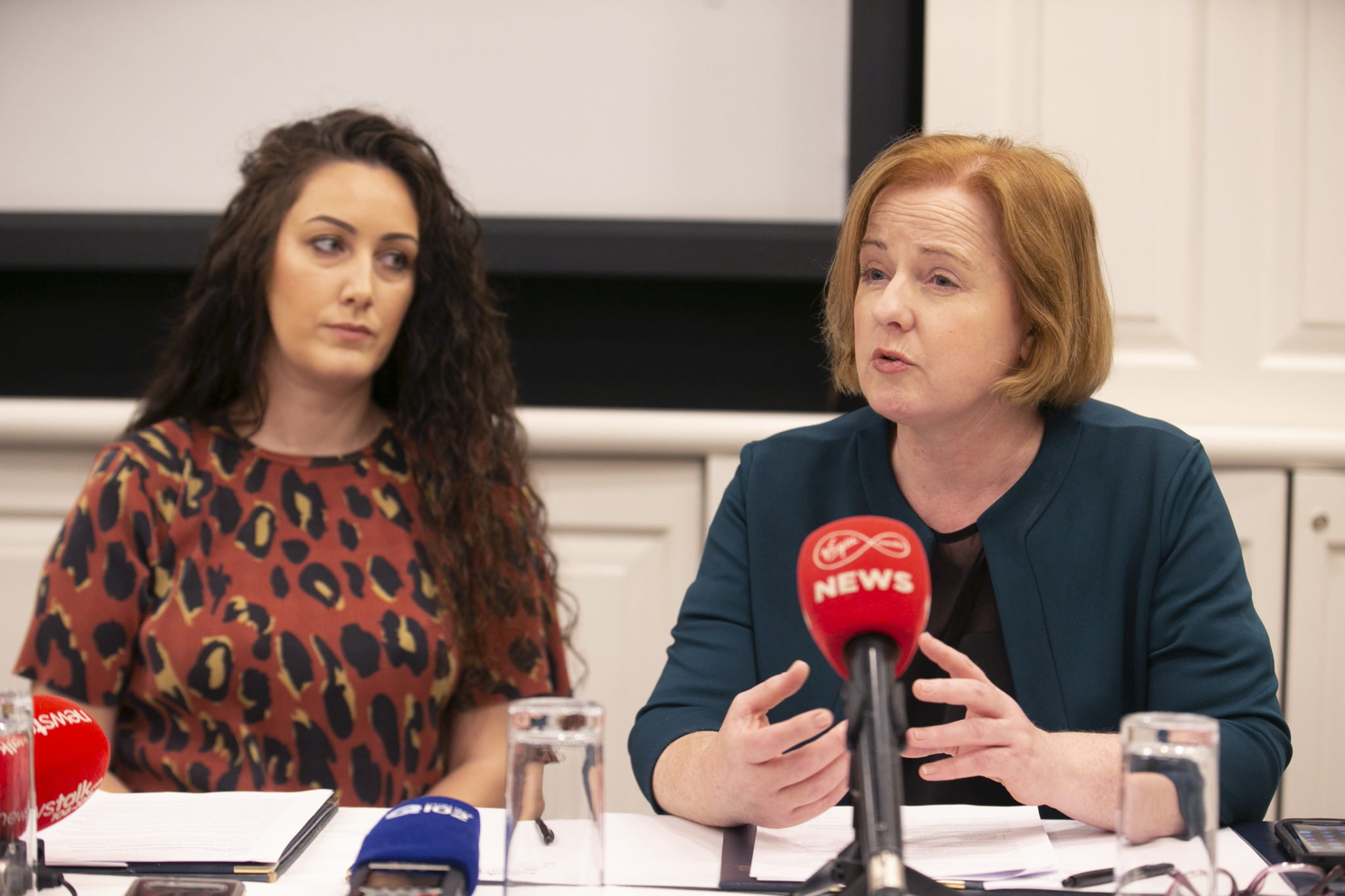 Kristy-Cyane McGill (L), who says she was sexually harassed by an estate agent while on the HAP scheme, at a press conference with Solidarity TD Ruth Coppinger, 24-09-2019. Image: Sam Boal/RollingNews

She said she had to leave the house and get the help of neighbour – who told her that the estate agent had done the same thing with a previous tenant.

She said she was “terrified of what might happen” if she reported him.

“Where would we go?” she said. “It took ten months to even find this house.”

“But also what would happen to me if I don’t report him. I was trapped. This was abuse.”

She said it has taken her two years to build up the strength to “speak about this horrific ordeal” – and warned that while the housing crisis is “terrifying” for anyone involved in it, it is particularly scary for vulnerable women.

She warned that women exiting homelessness are still “trapped by predators who are preying on their vulnerability.”

“Predators with spare keys to their homes,” she said.

“This is the terrifying reality for some women today. This was my reality.”

In the Dáil this afternoon, the Housing Minister Eoghan Murphy admitted that there are a lot of people who are vulnerable in housing and security because we do not yet have enough homes being built to meet demand.”

He said new tenant protections introduce this year are “very, very significant” and said the vast majority of people in the rental sector have safety and security in their homes.

He said he has been talking with the Justice Minister Charlie Flanagan about the possibility of “putting further protections in place” for tenants in vulnerable positions.

Under the HAP scheme, the council pays the bulk the rent while the tenant pays a contribution, based on their income, directly to the local authority.

Landlords are offered some tax relief for accepting a HAP tenant – and are not allowed to discriminate against a potential tenant because they are availing of it.

In practice however, many people have found it very difficult to secure a home under the scheme – with landlords often opting for tenants who are paying their own rent in full.

Deputy Coppinger said the system the housing crisis is “brewing a perfect storm for predator landlords,” with the HAP scheme at its “epicentre.”

“It shouldn’t come as a surprise that tenants reliant on HAP – mainly young women and lone parents with young children – are being exposed to unwanted sexual attention and abuse,” she said.

“Not even for a discount in rent but to be allowed to stay at all and also to potentially extract extra payments, which everyone knows are rife in the HAP sector.”

Deputy Coppinger and Solidarity TD Mick Barry are due to meet with Minister Murphy to discuss the issue later today.