"I got a message on LinkedIn, believe it or not!" | Shamrock Rovers' Roberto Lopes on his Cape Verde call-up

The weekend was a memorable one for Roberto Lopes. The Shamrock Rovers defender won the FAI Cup f...

"I got a message on LinkedIn, believe it or not!" | Shamrock Rovers' Roberto Lopes on his Cape Verde call-up

The weekend was a memorable one for Roberto Lopes. The Shamrock Rovers defender won the FAI Cup for the very first time as Stephen Bradley's side beat Dundalk on penalties.

But it's been an interesting period for the Bohemians player. The former Ireland Under-21 international won his first cap for Cape Verde in October.

He joined Nathan Murphy on Off The Ball to discuss both the cup final - his first appearance at the Aviva Stadium - and his new international adventure.

"The jubilation of scoring a last-minute goal only to be cancelled out by a last-second goal, it's a rollercoaster," Lopes said of the decider. 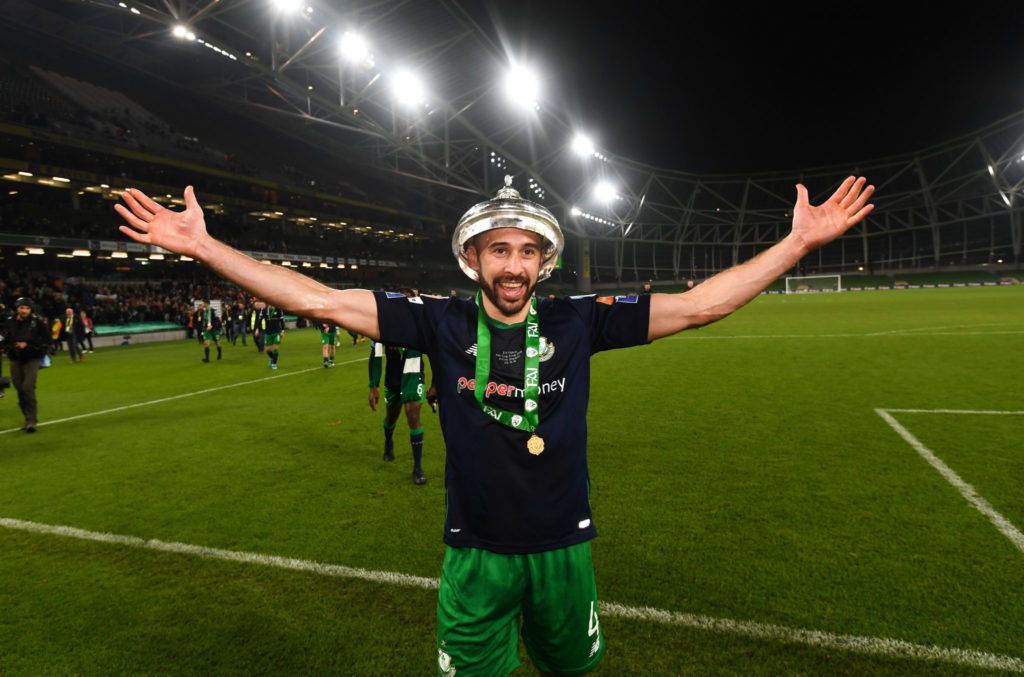 "Then to go through the extra-time and then the penalties, it does take a toll on your body.

"But I'm just so happy we came out on the right side of it."

However, like everyone in the same stadium, he had been shellshocked when Michael Duffy equalised in stoppage time.

"Obviously, we'd got a last-minute penalty and you think that'll be enough. But in this game, you can't switch off.

"And a player like Michael Duffy with so much quality, you give him half a sniff in the game and he'll punish you. And he did. It was literally a moment of brilliance from him because the ball could have dropped anywhere in the box. He was on it like a light and it was a great finish.

"But when the game finished, we spoke amongst ourselves and I just remember Joey [O'Brien] saying, 'Look, lads! We're all shocked.  Let's not dress it up. It happened but let's get on it with it. The next 5-10 minutes are important'. We managed the first half of extra time really well."

"My father is from Cape Verde Islands as people have got to know in the last few weeks," he said, also adding that he was always known by his nickname 'Pico' rather than Roberto Lopes after his Dad dubbed him that as a child.

"I played for them for three years and my final year at schoolboy, I was on to Belvedere. Then I went to Bohs for a good number of years and then went to Rovers. And here I am now."

Given the heated rivalry, the switch from Bohemians to Shamrock Rovers wasn't easy obviously.

"Whenever somebody either moves from Bohs to Rovers or Rovers to Bohs, it's always controversial," Lopes acknowledged.

"You're always going to get a bit of stick and you'd expect nothing else because it's a massive rivalry. I got a bit of stick at the time. But I don't think anyone's too bothered with it now."

Speaking of Cape Verde too, his international debut came last month in a friendly against Togo. The team has some recent pedigree, having qualified for Africa Cup of Nations this decade.

"When I was with Bohs, Ayman Ben Mohamed got called up to the Tunisia squad. And I was kinda joking, 'I can't wait for my call-up to the Cape Verde squad," he said.

"I looked into it a little bit then but never really pursued it with any real intent. And then I remember getting a message on LinkedIn, believe it or not! I'd connected with the manager and looked at his profile and I got a message in Portuguese which I thought was a welcome message or spam. So I took no notice of it and that was this time last year.

Delighted to be a part of the Squad and looking forward to the experience 🙌🏽🇨🇻🇨🇻🇨🇻 https://t.co/dNIlDROz5O

"A few weeks ago, before the squad was announced, he wrote to me again in English to see if I'd thought about the last message. So I translated it and turns out they were looking at getting new people in the squad and asked would I be interested in declaring. So I went back with my tail between my legs and apologised, 'Sorry I don't understand Portuguese, I just translated the message and I'd love to be involved if it's not too late'. And luckily, it wasn't too late. The ball got rolling from there."

You can watch the full Roberto Lopes interview above via our YouTube channel.

Johnny Ward's League of Ireland Team of the Decade