Who to look out for at Royal Ascot this week

What we can look forward to at Royal Ascot this year The biggest week in the flat racing calendar...

Who to look out for at Royal Ascot this week

What we can look forward to at Royal Ascot this year

The biggest week in the flat racing calendar gets underway at the Berkshire track on Tuesday. Here's a sample of what's in store for some big and small names in horseracing at Royal Ascot.

The start of Royal Ascot week could not have gone much worse for the young Kerry jockey. The Qatar Racing retained rider submitted a random breath sample at Salisbury on Sunday that was over the blood alcohol threshold limit. He was then stood down for the day. A winner at Windsor on Monday night won’t do any harm but it’s an embarrassing incident for the rising star of the weigh-room, who is already nine winners clear at the top of the UK jockeys’ Championship table. Murphy will look to the get the Royal meeting underway with a bang with Guildsman in the Coventry looking his best ride on the first day of Royal Ascot. 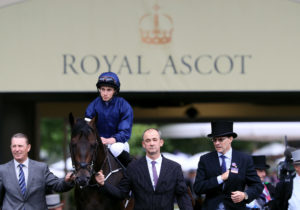 Ryan Moore on The Happy Prince with trainer Aidan O'Brien before the Wokingham Stakes during day five of Royal Ascot 2016, at Ascot Racecourse.

The master of Ballydoyle is again the favourite to be top trainer at the meeting. He has already won the award nine times, including in five of the last six years. The sheer number of runners he will saddle at Royal Ascot is breathtaking with multiple entries across almost every pattern race of the week and even a few handicap runners too. Arizona is favourite for the Coventry on day one. However, it is later in the week the Coolmore Cavalry may dominate, Ten Sovereigns in the Commonwealth Cup, Hermosa rerouted here from France on Saturday, Japan in the Henry VIII with Magical a lively chance in the Prince of Wales on Wednesday. Four winners have been enough to secure top trainer billing four times since 2011. Aidan O’Brien leaving Berkshire with only four winners would almost constitute failure given the volume of ammunition loaded.

Much like Cheltenham in the world of National Hunt Racing Royal Ascot is the peak every trainer wants to ascend to. Initially to have horses good enough to go and compete then have horses good enough to go and win. The latter is trickier than the former. Paddy Twomey and Jack Davidson are two Irish trainers who will have just a single runner at Royal Ascot. Paddy Twomey had Van Der Decken finished fifth behind Caravaggio in 2016, while Davidson has his first runner with Fresnel.

Sunday Sovereign is a thoroughly exciting juvenile, sold by Noel Hayes’ Sunday Racing Club to King Power Racing his impressive Curragh win. The speedy son of Equiano will line up in the Norfolk Stakes on Thursday with a favourite’s chance.

While 70 minutes later, Davidson’s stable star Fresnel will start at a bigger price in the group two Ribblesdale Stakes. The Meath man has only held his licence since 2017 and half of his four career winners have arrived in the last fortnight. It may look like the naivety of youth but the Musidora run and fourth to Pink Dogwood legitimate Fresnel’s entry. Whether she makes the tricky step from runner to winner is the question.

Race of the week

A festival extended to five days has to answer questions about the dilution of quality. Although it does not make it easier to establish the race of the week. No Enable or Masar in the Prince of Wales takes some of that sheen off, while the suspicion that the three-year-old milers are much of a muchness dampens the St James Palace a shade.

So the race of the week could be as early as 3.40 on Tuesday, the Kings Stand. A field of 12 assembles with the two market principles drawn top and bottom. The enigmatic Battash who is zero from two runs at the track and Blue Point who has won here three times from four. Abbaye winner Mabs Cross adds to the depth alongside potential three-year-old star Sergei Prokofiev and the American speedball Imprimis. It will take less than 59 seconds to run but whoever wins will be the star of the sprinting ranks.

Aidan O'Brien withdraws all of his runners at Longchamp