The joys of attending GAA matches in January.

If you have ever been lucky enough to sit in Croke Park on All-Ireland final day, you will more than likely have been overcome with a specific emotion at one point or another, writes Eoin Sheahan on Pre-season GAA.

It is not unusual to get a sort of out-of-body experience, or come to a stark realisation of what really matters in life. It has happened to us all. We are sitting on a comfy seat in the Cusack Stand, marvelling at 30 of the best footballers in the peak of their athletic powers going to war with one another.

But we are somewhat distracted by the one thing going on in our internal monologues: “Jesus Christ, I wish I was at the Bord na Mona O’Byrne Cup.”

Attending pre-season GAA games is the most primal version of the relationship between the games and the supporters. 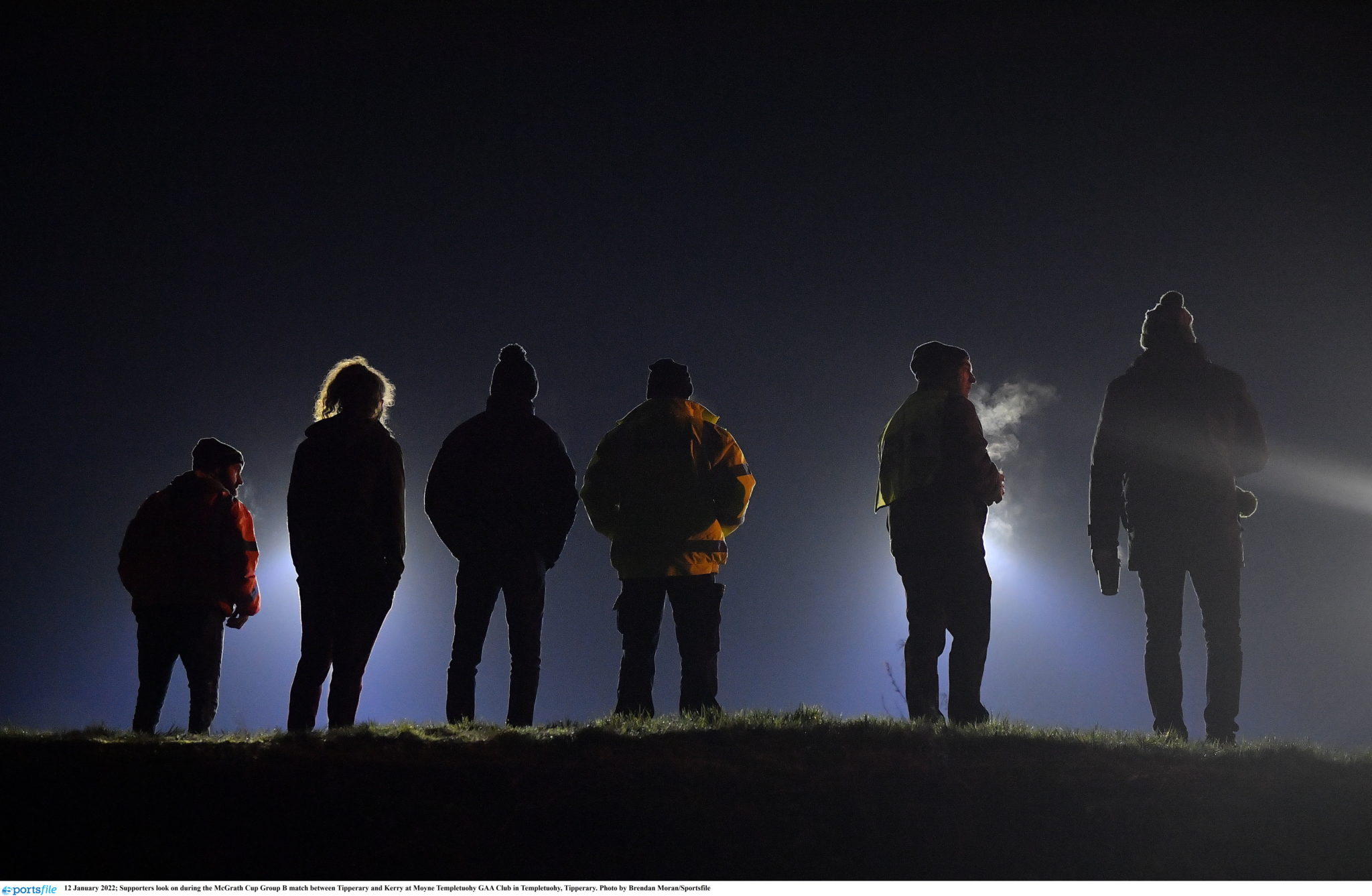 12 January 2022; Supporters look on during the McGrath Cup Group B match between Tipperary and Kerry at Moyne Templetuohy GAA Club in Templetuohy, Tipperary. Photo by Brendan Moran/Sportsfile

Of course we, as fans, know that we influence everything. We can take most of the credit for everything that has ever been won by our counties, but accept that we share that burden more generously when Croke Park is full, for example.

In the month of January, however, the numbers of fans are down. Way down. There might be 50 travelling fans at away fixtures and, on days like these, it is fair to say that never has so much been asked of so few.

But, we get on with the business of keeping the show on the road. We make the ultimate sacrifice because we know, in return, we are earning the greatest possible status symbol for the modern-day Gaelic Games supporter: Becoming a pre-season match goer.

If you have never been to a pre-season GAA match, here is a simple checklist of things to do when you do eventually attend:

An important rule to remember, too, is this: The greater the challenge of getting to a game, the greater the pleasure you get out of it. It is an essential part of every pre-season journey that you put your wing mirrors into severe jeopardy while clinging perilously onto the ditch of a bohereen.

“Why do you put yourself in such precarious situations?” I hear you ask. “Why do you insist on playing with fire?” Don’t get me wrong, I see your point.

Streaming services would allow us to sit at home and watch these matches from the comfort - and safety - of our own homes. To watch it at home would, I guess, make sense. But it makes “sense” in the way that the arrival of the Tea Master machine in Craggy Island made “sense.” To borrow a phrase from the great Mrs. Doyle, maybe I like the misery.

The danger is addictive and such thrills are simply not available when all roads lead to Croke Park in the summer. 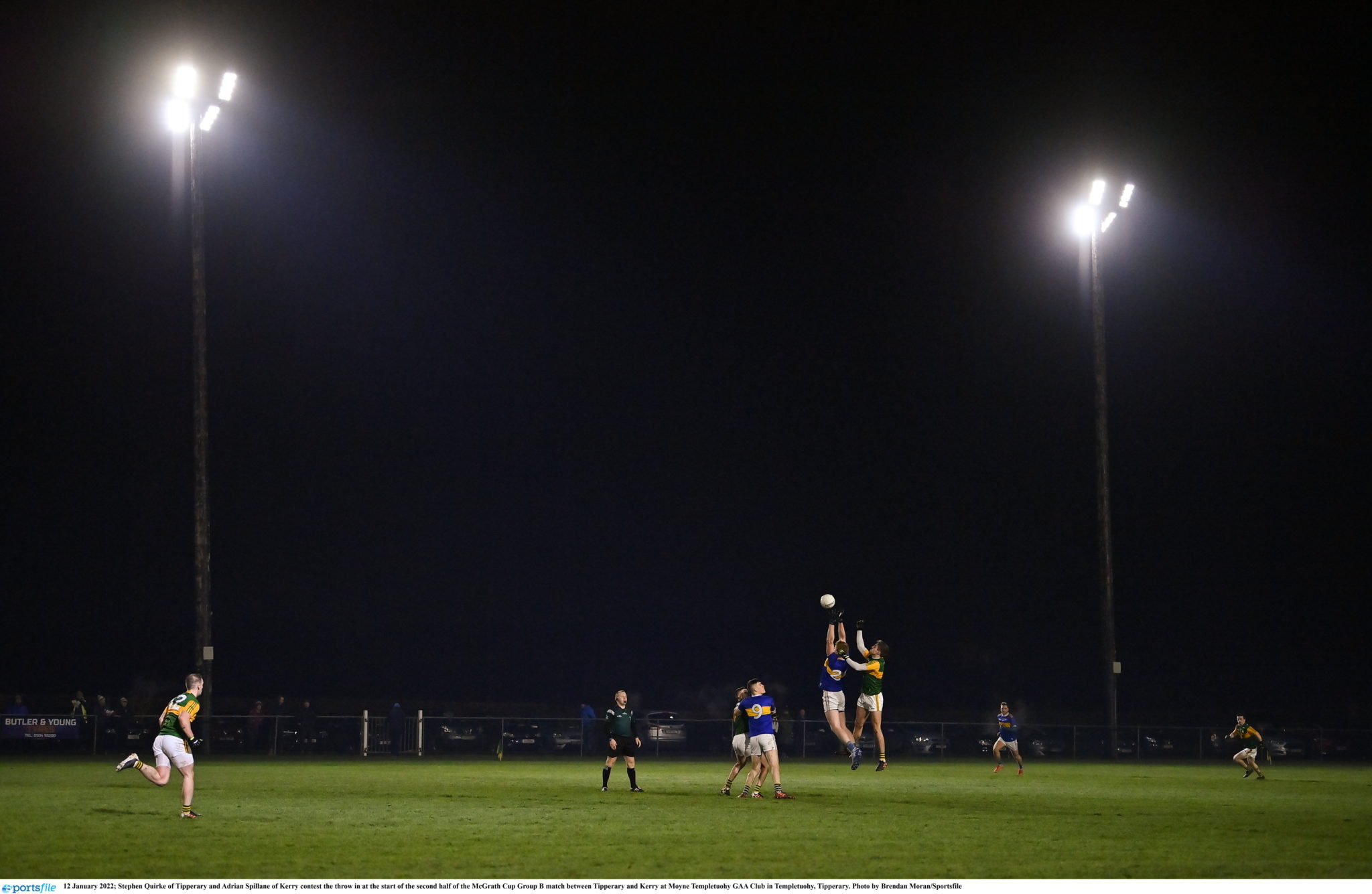 12 January 2022; Stephen Quirke of Tipperary and Adrian Spillane of Kerry contest the throw in at the start of the second half of the McGrath Cup Group B match between Tipperary and Kerry at Moyne Templetuohy GAA Club in Templetuohy, Tipperary. Photo by Brendan Moran/Sportsfile

Now, there are some inconvenient truths to be tackled here. It is always very cold at pre-season GAA matches. It is almost always wet. The quality of football is certainly going to be of a lower standard than at any other point in the year.

It is always very cold.

Such facts may paint a picture of a deeply unsatisfying outing. But if we block out the haters for a moment, is there really anything more satisfying than the life experience you get from these journeys? People who attend pre-season GAA have seen things. They develop greater wisdom about life and develop a sort of Irish sageness that can only properly be depicted by the Matt LeBlanc meme.

There is greater esteem granted to these pre-season war horses. There are the open-top buses to parade the fans who went to pre-season games when their counties bring Sam Maguire home six months later.

There are the respectful smiles from your grandkids when you remind them that their grandfather went to watch Kerry vs. Tipperary in Templetuohy in January 2022.

There is the recognition on the streets, the roads that get named after you, and the general feeling that you made the ultimate sacrifice for your county.

Of course, pre-season football and hurling is, at times, objectively bad. But nothing warms you up quicker than getting home and hearing your three-year-old grandchild say, “thank you for being a martyr for me and my county, granddad. We will win the All-Ireland this year because of you - of that I am certain.”