Credited with assuring Liverpool's defensive solidity, Kenny Cunningham identified one concern he had with Virgil van Dijk's performance during Wednesday's defeat to Barcelona.

"It was the Champions League semi-final first-leg at the Nou Camp against Lionel Messi," Ger Gilroy stated by way of contradicting Kenny Cunningham's concerns regarding Virgil van Dijk's concentration levels.

"I think, on a subconscious level, there's a little bit of 'do I really need to track that ball, this is beneath me,'" the former Irish international believes he has identified in the Dutchman's game.

"I've always looked at van Dijk, and you're afraid to say it because he's that good, but there's always been that in the way he carries himself.

"You can't switch that on and off, and I'm his biggest fan, but I've got to say it because I've seen it."

We've been highlighting all his qualities this season - one-to-one defending, leadership, comfortable on the ball, presence, the whole thing 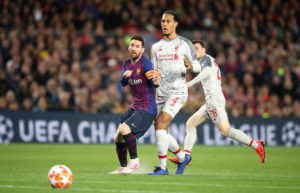 On a mixed night for Liverpool, a solid performance against Barcelona nevertheless saw the hosts run out 3-0 winners.

With the club's Champions League hopes now in peril, Cunningham sought to identify where Liverpool's star-man usually excels, and why that may have come unstuck on Wednesday night.

"I wouldn't keep on and on about it, but it's a fact," Cunningham noted of van Dijk's lapses in concentration.

"We've been highlighting all his qualities this season - one-to-one defending, leadership, comfortable on the ball, presence, the whole thing.

"Player of the year for me, but, you can't get away from this.

"Even this season, he knows how good he is, people will say border-line arrogant."

A rare low-point in what has been a phenomenal season for the Dutch defender, he will have an opportunity to rectify these mistakes when the clubs meet in Anfield for the second-leg next week.