The GAA say they'll feel the after effects of the COVID-19 pandemic for "some years to come" afte...

The GAA say they'll feel the after effects of the COVID-19 pandemic for "some years to come" after announcing record losses of  €34.1m for 2020.

Revenue dropped by 57% from €73.9m in 2019 to €31.4m last year, largely due to a lack of supporters in stadiums for the inter-county Championships.

The association brought in only €3.6m in gate receipts for 2020, compared to a bumper €36m in the previous 12-months with those ticket sales accounting for almost half the revenue in the 2019 accounts.

GAA director general Tom Ryan has described the numbers as "very damaging", while noting that completing the 2020 games schedule would not have been possible without significant government funding.

"Our success is not defined by financial performance, and nor should it be. Nevertheless the past year has proved very damaging to the association from a financial point of view, with the likelihood that the after effects will be felt for some years to come."

“Unfortunately after the year we had endured, and with no prospect of attendance revenues, the Association was in no position to fund such an undertaking.

“The Government stepped in to underwrite the championship and it is to their credit that we all enjoyed such great games as winter closed in. GAA members and supporters everywhere greatly appreciated this unprecedented support at a time when we all needed it most.” 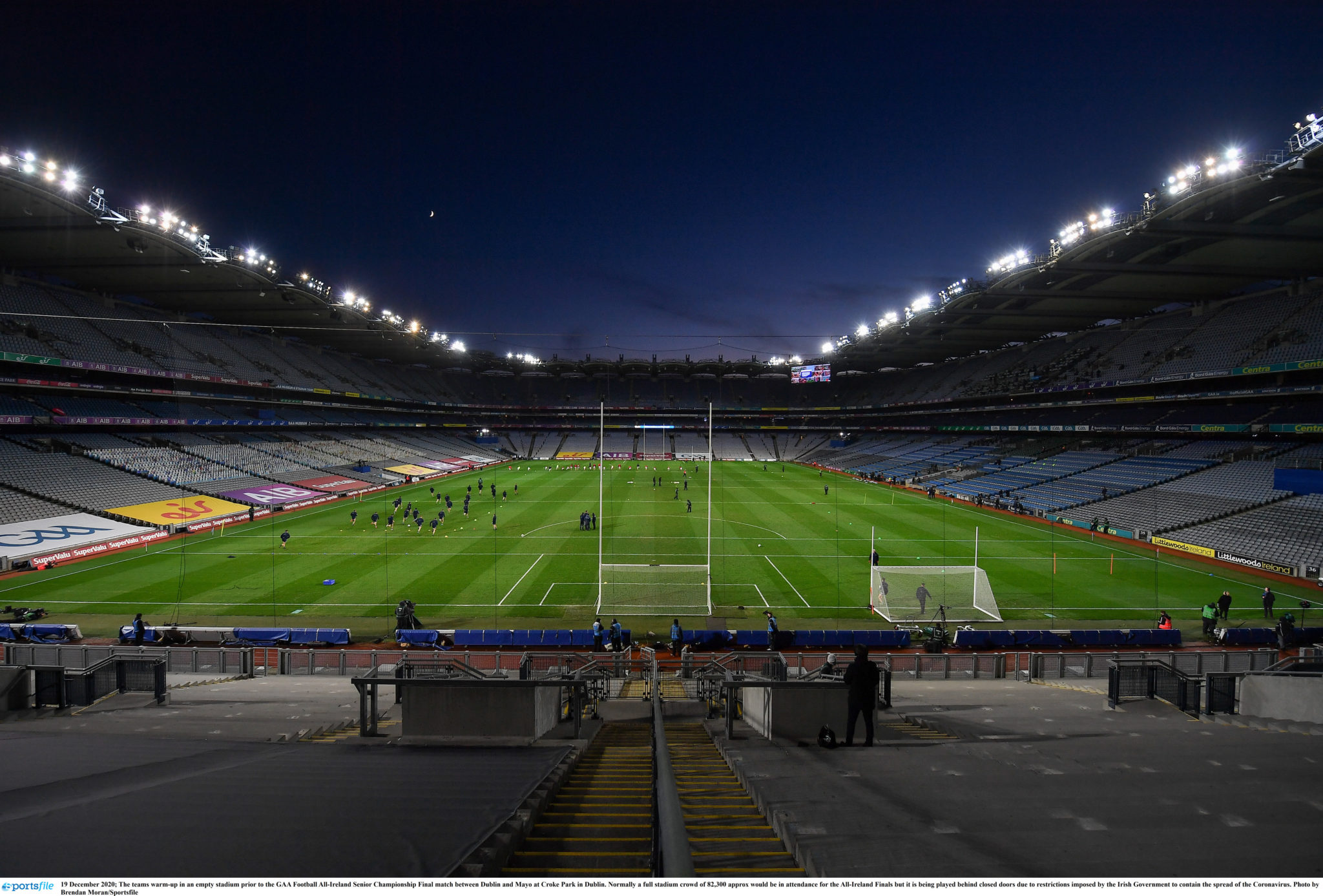 19 December 2020; The teams warm-up in an empty stadium prior to the GAA Football All-Ireland Senior Championship Final match between Dublin and Mayo at Croke Park in Dublin. Normally a full stadium crowd of 82,300 approx would be in attendance for the All-Ireland Finals but it is being played behind closed doors due to restrictions imposed by the Irish Government to contain the spread of the Coronavirus. Photo by Brendan Moran/Sportsfile

GAA finance director Ger Mulryan says they are anticipating another year of heavy losses with supporters unlikely to be allowed to attend matches in meaningful numbers for some time.

"Losses at similar levels are currently forecasted and additional sources of funding to support these losses will be required.

"Contact has been made with Government regarding support for 2021 and the initial feedback is positive, separately our banking partners have indicated confidence in our ability to bounce back when our games resume and have committed a line of credit.

"We will however need to manage and be responsible for our own financial affairs and will need to reduce our
core cost base further to guard the Association's long term health.

"The primary income source in our 2020 accounts was direct government support of €18.5m, received through Sport Ireland.

"CLG was awarded €14m in direct government support to assist the staging of Championship 2020 and a further €9m from the €85m "Rescue Fund for Sport".

"In total, €13m of this €23m Covid support funding has been recorded in the 2020 accounts, with the balance deferred against the November and December cost base.

"The remaining €5.5m of income recognised is made up of a direct grant of €2.8m, for our inter-county players, along with our annual coaching and games grants of €2.3m, and €400k from the Department of Foreign Affairs.

"The vaccination roll-out will directly influence when our games can fully return to normal and this is not forecasted to be complete until late 2021. Our ability to generate income will remain challenged and may not return to previous levels until Summer 2022 at the earliest."