Tennis Ireland has confirmed that their facilities will close after all, in line with the Government's Level-5 coronavirus restrictions.

It marks a 180-degree turn in their stance, having claimed on Wednesday night that they would be allowing courts to remain open.

They had said that outdoor courts would remain open for restricted play. Singles games would only be allowed on a casual basis for exercise purpose only. Players would also have had to live within a 5km radius of the club.

However, following a communication from Sport Ireland on Thursday morning, Tennis Ireland have been forced to perform a U-turn. 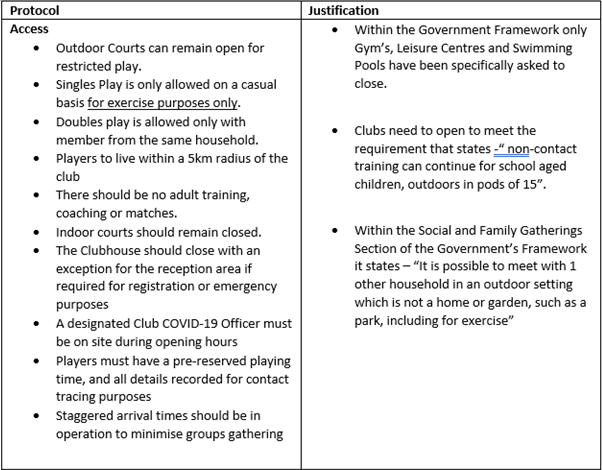 Their staying open would have been in stark contrast to other sporting facilities that were forced to close their gates and doors at midnight on Wednesday.

Particularly aggrieved were golf club members who, despite protestations of safety, are deprived access to courses country-wide for the next six weeks.

Tennis Ireland says it "understands the difficulties and disappointment that this instruction will pose for players, coaches, club volunteers and staff but the challenge caused by COVID-19 impacts across all sectors of society and sport and we need a nationwide effort to fight it."

Following a communication this morning from Sport Ireland, Tennis Ireland, notwithstanding to its communication yesterday evening,  must unfortunately now ask all member Clubs to suspend all activities (including all junior coaching programmes) in the Republic of Ireland with immediate effect.

The Department of Sport Expert Group is meeting this morning to finalise Level 5 protocols for sporting organisations and once these protocols have been issued to Tennis Ireland,  we will communicate further with member Clubs.

Tennis Ireland understands the difficulties and disappointment that this instruction will pose for players, coaches, club volunteers and staff but the challenge caused by COVID-19 impacts across all sectors of society and sport and we need a nationwide effort to fight it.  Tennis Ireland will, as it always has done, work closely with Government and Sport Ireland to reopen our sport as soon as possible, even on a restricted basis, in as safe a manner as possible.

Tennis Ireland would like to thank Clubs, their members and coaches for the work that has been done over the last number of months in providing much needed exercise and safe, socially distant enjoyment to communities across Ireland.

Seamus Power out of Zurich Classic after contracting COVID-19

Olympics could still be cancelled if they can't be hosted safely