Philly McMahon: "Good for football" if Jim Gavin stays on with Dublin

Philly McMahon: "Good for football" if Jim Gavin stays on with Dublin

Dublin star Philly McMahon says for the good of gaelic football he hopes their senior manager Jim Gavin stays on in the job for the 2020 campaign.

The Ballymun Kickhams man was speaking at yesterday's 15,000 sell-out celebration of the five-in-a-row and three-in-a-row winning men's and ladies' sides at Merrion Square.

McMahon was unsure whether Gavin's intention was to stay on with the team for another year.

The 32-year-old was adamant however that it would be a huge coup to have Gavin and his backroom team continue in their roles as they go in search of six-in-a-row next year.

"Ah definitely, look at the success we've had, look what they've done with the group. Not only in terms of winning stuff but how he's developed the culture and how that's helped our communities in Dublin.

"The lads give back so much to their communities. If Jim Gavin stays on it's good for football and it's good for Dublin as a community." 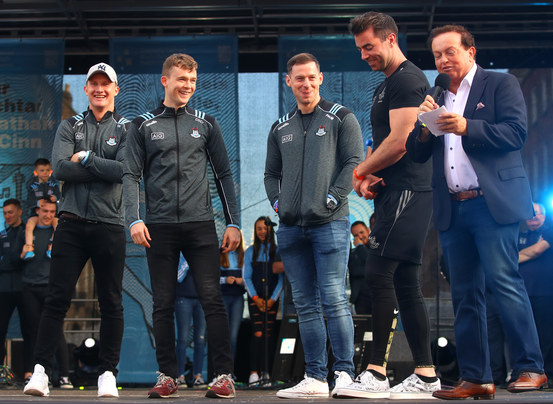 McMahon said that during the 'drive for five' run it was difficult not to discuss the importance of this year to people, but he added it wasn't something that was readily discussed among the squad.

"It's something that you have to respect. When people come up to you they see you as a footballer and you just say 'yeah, the drive for five.' But it's not what we think about or talk about within the changing room. We're talking about performing every day and performing every game.

"And if you think of winning five-in-a-row, jeez you've lost already because you're already thinking too far ahead. There's a lot of lads here that are young but there are a good few lads that would remember 2010. We played Cork and we were five points up with five minutes to go and we thought we had the game won and we got knocked out.

"...I think it's very important for us to stay grounded and this year we accepted there was going to be a narrative around the five-in-a-row but ultimately [we knew] that's not going to help us win anything."

Two-time All-Star winner McMahon was dropped for this year's All-Ireland semi-final win over Mayo, and he acknowledged he'd love to stay on into next year himself, but only if it's felt he can add something to the panel.

"The body is in a good place and I'm injury-free so I'll a look at where I am [in the] off-season. It's a special place to be around so if I can add to the group I'll definitely be staying on, so that's what it comes down to."