Mythbusted: The steward who pushed Jack Grealish was not arrested

Police did not arrest a Birmingham City steward who appeared to lay his hands on Jack Grealish wh...

Mythbusted: The steward who pushed Jack Grealish was not arrested

Police did not arrest a Birmingham City steward who appeared to lay his hands on Jack Grealish while he celebrated scoring for Aston Villa at St Andrews in a 1-0 Champions win over their bitter rivals.

Television footage appeared to show a member of security being led away by Police after appearing to push and knee the 23-year-old in the back as he celebrated with his teammates and fans.

West Midlands Police confirmed a steward was spoken to in the aftermath of Grealish's goal celebration but refuted claims that an arrest was made.

However in a statement they confirmed they did speak to the individual but that "no offence has been reported at this stage".

The steward was spotted by eagle eyed fans who shared a clip of his actions on social media.

Earlier in the game a disgraceful assault on Jack Grealish by a fan garnered headlines worldwide.

The Villa captain was punched from behind by a pitch invader in the early stages of Sunday's derby against Birmingham City.

West Midlands Police later confirmed that Paul Mitchell, 27, had been charged with "invading the pitch and assaulting" Grealish.

Birmingham City had earlier announced the supporter would be banned for life.

Grealish showed no ill effects from the incident before going on to score the only goal in his side's 1-0 victory.

Grealish's Villa teammate Conor Hourihane spoke exclusively to Off The Ball AM on Monday and told Ger Gilroy and Eoin Sheahan that he was relieved that Grealish was not hurt: 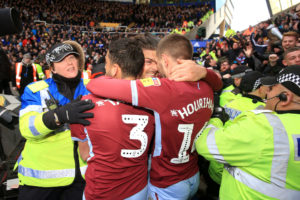 "It was an absolutely disgusting incident. That can't be tolerated in the game. Jack could have been severely hurt."

The chief executive of the professional footballers association Gordon Taylor has called for a comprehensive review of crowd control in all stadiums in the wake of incidents at St Andrews and the Emirates.

A pitch invader shoved Chris Smalling after running onto the pitch after the Gunners scored in the 2-0 win.

It's after three incidents over the weekend which saw supporters run on to the pitch and confront players.

Taylor told Sky Sports that the incident most be dealt with to the full extent of the law:

"If it happened on the high street there would be severe action taken.

"There is no reason why that should not be done just because it is a football ground.

"There is a combination of sanctions with fines, ground closures, games behind closed doors and points deductions.

"Every case will be looked at on its merits.

"It seems to be a time when these things are coming back. We need to improve the atmosphere.

"You can have commitment and enjoyment and it is great entertainment but when it bubbles over to this it is no longer what we want it to be.

"It is about setting an example.

"We have been warned now on too many occasions. This has got to be dealt with by the football bodies, the police, the stewards and the clubs.