After the Donegal county board proposed a motion that sought to stop counties nominating Croke Pa...

After the Donegal county board proposed a motion that sought to stop counties nominating Croke Park a 'home' venue for the Super 8 series failed at the GAA's annual congress on Saturday afternoon, Mick McGrath, chairman of the county board in question, spoke to OTB AM about his reaction to the result.

"We have to say we were [disappointed]," McGrath stated regarding the lack of support the Donegal motion got from the other county delegates present at congress.

"We know the exceptional circumstances that Dublin have in the hiring of Croke Park for their games, and it was totally exaggerated then with the defence of it that we were trying to move Dublin out of Croke Park altogether.

"It was very difficult to fight against that when we didn't have much defence.

"It was just the one game in the quarter-finals [that we wanted to move], and the reasoning behind that is that it was deemed that there would be a neutral game, a home game and an away game of the three games in the group that's played.

"When you've got one county that can declare the neutral ground as a home base, our members were very, very puzzled by that."

We're the last county to beat Dublin in the Championship there, so we've no issue going to Croke Park any time 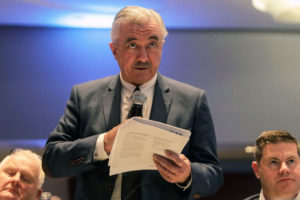 Criticised in certain quarters for the poor wording of a motion that, at its essence, appeared agreeable to many objective viewers, Mick McGrath refuted this notion.

"It's very easy to be wise after the event," McGrath stated in response to these accusations.

"To move words around, or re-word it or structure it differently is, I suppose, being wise after the event.

"We didn't take any legal advice or anything like that or get some barrister to word it for us in such a way that it would be more watertight.

"We didn't go down that road because we were being genuine in where we were coming from.

"It was the GAA people of Donegal, and the way it was worded was worded by them. "

Responding to complaints from Dublin CEO John Costello that the motion was "divisive and mean-spirited," and more pointedly to Sean Kelly's assertion that Donegal were behaving in a negative manner, McGrath didn't believe this to be the case.

"It was drummed up that we were trying to muscle in on getting Dublin removed completely from Croke Park," McGrath stated, "but that was not the case of our motion whatsoever."

"If there was any divisiveness, it came from [Kelly], not us.

"We would have had a good enough relationship with him over the years and we weren't looking for any favours. We were only looking for fairness.

"To say that we were negative, we are far from negative. We were at no stage afraid or concerned about playing Dublin in Croke Park.

"We've played them many a time there and we're the last county to beat them in the Championship there, so we've no issue going to Croke Park any time."

Regarding the process itself, Mick McGrath insisted that the Donegal county board accept that the democratic process generated the result it did, and "we have no difficulty with that."

However, when asked if Donegal would persist with the motion in the years to follow, McGrath believes they have done all they can.

"We will be parking it up as from today forward," McGrath revealed, "because we don't see any more sense in discussing it any further."

Ireland could host a quarter of Euro 2028 games | reports