However Bournemouth's final game of the season went against Crystal Palace yesterday afternoon, i...

However Bournemouth's final game of the season went against Crystal Palace yesterday afternoon, it was doubtful that their young Irish 'keeper Mark Travers could have a day that matched his debut.

Man-of-the-match in a 1-0 defeat of Tottenham Hotspur last weekend, the 19-year-old from Maynooth didn't enjoy himself quite so much as Bournemouth succumbed to a 5-3 defeat at Selhurst Park.

"It's a very disappointing end of the season," said Travers in a post-match interview with Off The Ball, "but you know there are ups and downs in football.

It's obviously the goal to try and push in and get as many games as I can with Bournemouth. If not, we'll see what happens 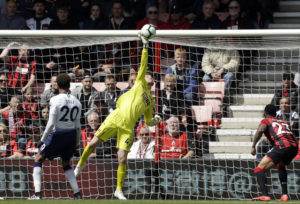 Announced as one of three goalkeepers Mick McCarthy intends to bring with for an Irish training camp next week, Travers, a former midfielder with Lucan United, remains intent to build upon his strong end to the Premier League season.

"It's good to get two Premier League games under my belt," Travers admitted.

"I'll take from it, learn from it and try to build on it next season.

"It's obviously the goal to try and push in and get as many games as I can with Bournemouth.

Hinting at the possibility that he may not be content to wait all that long for a sustained run of first-team chances, Mark Travers is determined to increase his international profile while at it.

"You've got to set your standards as high as possible," Travers stated.

"The [Premier League] is where I want to play week in week so, so I'll keep working hard and hopefully it comes.

"Obviously Darren Randolph has done really well [for Ireland], Kieran O'Hara is in there as well, so we'll see what happens."