The European Tour has announced its return with six tournaments in England and Wales which will a...

The European Tour has announced its return with six tournaments in England and Wales which will all be played behind closed doors.

The season was suspended on 8 March due to the global coronavirus pandemic but organisers have confirmed the initial events which will begin in the summer.

They also plan to announce further tournaments from September through to November.

A statement released by the European Tour reads: "All tournaments will be subject to stringent safety and testing protocols set out in the Tour’s comprehensive Health Strategy which will continue to evolve, aligned with international Government guidance and health guidelines."

Former world number one, Lee Westwood (main pic), is hosting the first of the six events - dubbed the 'UK Swing' - the British Masters which are commencing a week earlier than scheduled.

Close House, near Newcastle, is the venue for the Masters which will be played from Wednesday July 22 to Saturday July 25.

It will be followed by the English Open at the Marriott Forest of Arden and the English Championship at Marriott Hanbury Manor.

Then it's on to The Celtic Manor Resort in Newport which hosts back-to-back European Tour tournaments – the Celtic Classic and the Wales Open.

This year also marks the tenth anniversary of Europe’s dramatic victory against the United States in The 2010 Ryder Cup at the same venue.

The UK Swing will then conclude with the UK Championship at The Belfry. 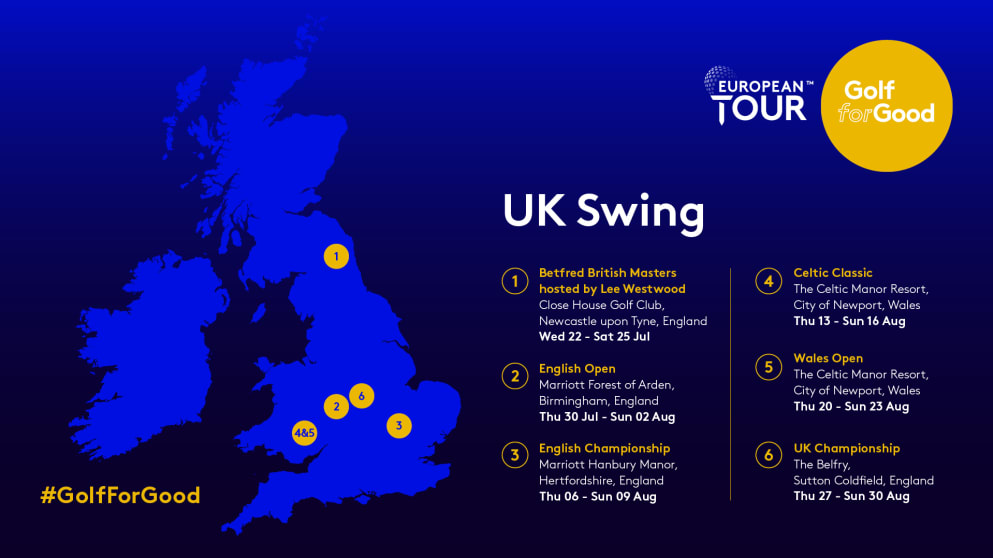 "Without question we have had to think differently about the remainder of our 2020 season which is reflected in today’s announcement," said Pelley.

"Initially, therefore, based on the expert guidance we received, playing in clusters, in one territory, is the best option in terms of testing, travel and accommodation."

While the dates for the autumn events are yet to be confirmed, rescheduled dates have been announced for four Rolex Series events.

The Aberdeen Standard Investments Scottish Open at The Renaissance Club will now takes place from 8-11 October and the BMW PGA Championship at Wentworth Club which moves to the following week, 15-18 October.

There are also new dates for the final two tournaments of the year.

The season-ending DP World Tour Championship, Dubai, is now due to take place from December 10-13 at Jumeirah Golf Estates, where the 2020 Race to Dubai Champion will be crowned.