Dundalk managerial situation "very clear" according to League of Ireland

FAI League of Ireland director Mark Scanlon claims the association is comfortable with the manage...

Dundalk managerial situation "very clear" according to League of Ireland

FAI League of Ireland director Mark Scanlon claims the association is comfortable with the managerial situation at Dundalk.

On Tuesday, the club confirmed Shane Keegan will be their team manager for the 2021 season, which begins with Sunday's President's Cup clash against Shamrock Rovers.

Giovagnoli was only appointed as permanent boss in December, having succeeded Vinny Perth in August. The Italian led Dundalk to the group stage of the Europa League and FAI Cup success at the Aviva.

But a lack of a UEFA Pro License for Giovagnoli has led the Oriel Park club to rearrange the furniture, seemingly in an effort to appease the licensing requirements.

Speaking with OTB AM, Scanlon said a "grace period" for Giovagnoli to gain a Pro License had elapsed, and Dundalk have taken the appropriate action.

"It's very clear from our side, really, Scanlon said, "The club's - as part of the club licensing process - have to submit mandated persons in a number of roles.

"And along with that there's qualifications that need to be in place.

"Shane Keegan was submitted as the manager of Dundalk, and it's quite clear for us what the situation is."

Dundalk outlined the breakdown of their coaching staff in a mail to media outlets on Wednesday. 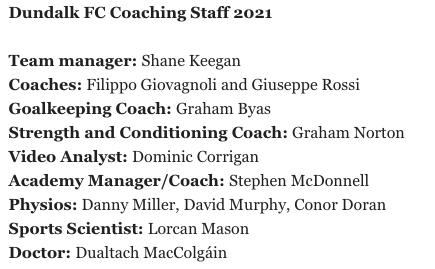 Scanlon said, "Filippo and Giuseppe are coaches there, and Shane is the manager. Jim [Magilton] has obviously come in as the sporting director as well.

"There's a lot of experience and coaching knowledge and qualification at the club, and we wish them the best of luck this season."

Dundalk were fined €50,000 by UEFA last season for 'shadow coaching', and Giovagnoli was banished to the stands for their group stage games.

Scanlon was asked if the new job titles at Oriel Park were merely a way of cheekily circumventing the rules.

"I think really that's an internal matter for the club, in terms of the coaching direction," he replied.

"Clubs now have a lot more complex situations now, in terms of coaching scenarios than it used to be. It's not always as straightforward as a manger or assistant manager as it was in the past.

"Clubs - whether here, or across Europe - have different roles as head coaches, sporting directors and technical directors and so on.

"How they organise that internally within Dundalk, or any other club within the league is a matter for a club.

"As far as the club licensing process is concerned - and that's here on the domestic licensing, and also on the UEFA licensing - the mandated person of who the manager is is somebody with a Pro License qualification and Shane is obviously the manager."

The full interview with FAI League of Ireland director Mark Scanlon can be seen on Thursday's OTB AM.

Not easy being green: Bennett clings onto points jersey on Paris-Nice