Wexford manager Davy Fitzgerald says he is "devastated" following their two-point loss to Tipperary in the All-Ireland Hurling Semi-Final in Croke Park.

The Premier ran out winners by 1-28 to 3-20, despite being five points down with 20 minutes to go when Lee Chin found the back of the net for Wexford.

Speaking after the game, a dejected Davy Fitzgerald said, "I'm just absolutely gutted, I'm devastated. I think our boys deserved a bit more. You have to admire Tipperary. The courage they showed, the tenacity, they fought it out at the end, but we had our chances - we can't complain.

"But, I'm extremely proud of the Wexford boys. They were incredible. Never gave up, stuck to the game plan. I just feel when the man was sent off it gave them a bit more space. They avoided our spare man, which is a big thing. They got some great scores at the end.

"I believed before today we were going to win. I don't fear any team out there with this bunch. I feel we could beat anyone of them out there. I knew the Leinster Championship was a crazy Championship, it was an unreal Championship. I'm extremely proud of these boys, they're Leinster Champions. The people of Wexford should be absolutely delighted with the lads because they gave 110%. 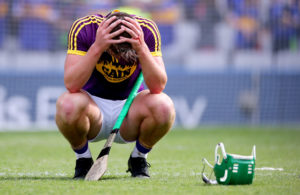 "It's that feeling inside of your stomach you don't want. It's horrendous. You know what, I'll say this to the guys, once we have our health and we can get up tomorrow we will get over this bit of pain and we'll get on with it.

Tipperary take on Kilkenny in the 2019 All-Ireland Hurling Final in Croke Park on August 18th.