Vote on Brexit deal postponed after MPs back 'Letwin amendment'

There will not be a meaningful vote on Boris Johnson's new Brexit deal today in the House of Commons.

MPs have instead backed an amendment - the 'Letwin amendment' - that withholds support for his agreement until all the legislation that's needed to be passed is in place.

It also means the prime minister will have to write a letter to Brussels tonight to ask for an extension to the Brexit deadline.

It passed with 322 votes to 306, after the DUP opted to back the amendment.

The amendment was put forward by Tory MP Oliver Letwin.

"I'm not daunted or dismayed by this particular vote... I continue in the very strong belief that the best thing for the UK and the whole of Europe is for us to leave with this new deal on October 31st.

"I will not negotiate a delay with the EU, and neither does the law compel me to do so."

He said his government will introduce the necessary legislation to implement the new deal next week.

Labour's Jeremy Corbyn welcomed today's vote, suggesting the House had clearly voted to stop a "no deal crash out from the European Union".

He added: "The Prime Minister must now comply with the law. He can no longer use the threat of a no deal crash-out to blackmail people to support his sell-out deal."

The opposition leader cautioned Mr Johnson to "think very carefully" about his remarks on a Brexit delay, saying the prime minister is now legally obliged to seek an extension.

Nigel Dodds of the DUP, meanwhile, said the delay will give more time to consider the bill and any amendments that come forward.

He suggested: "We will examine all the details of the bill, and all amendments, in light of our overriding concerns about the constitutional, economic integrity of the union. That is our priority, and it will remain our priority in the days ahead."

As MPs debated the new deal in Westminster on Saturday - the first such weekend sitting in 37 years - thousands of demonstrators gathered around parliament to call for a second Brexit referendum or 'people's vote'. 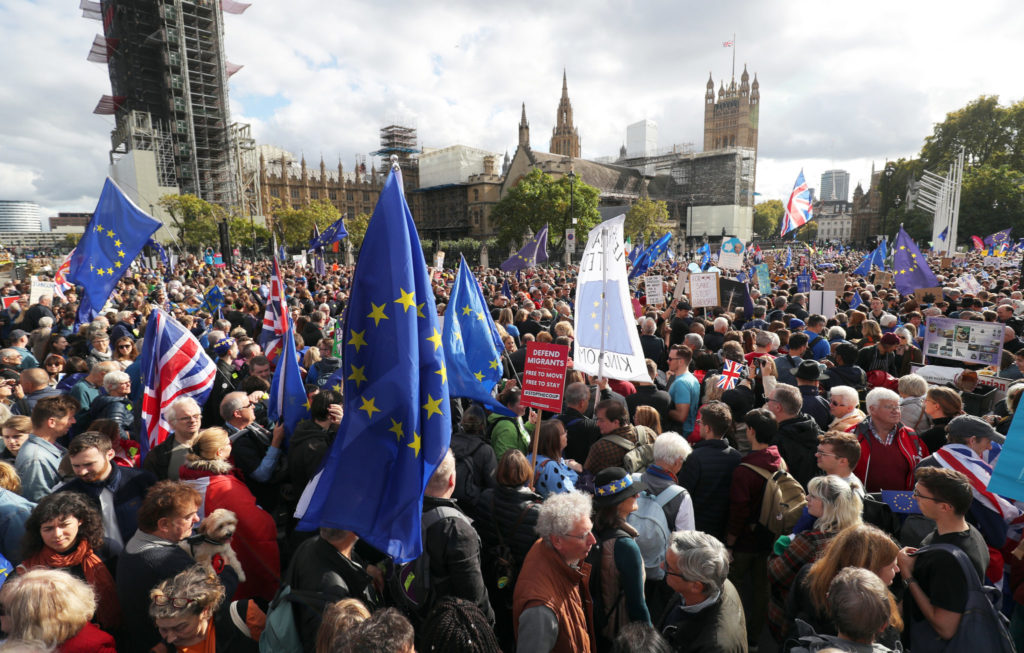 Anti-Brexit protesters fill Parliament Square in London, after Prime Minister Boris Johnson delivered a statement in the House of Commons, on his new Brexit deal on what has been dubbed "Super Saturday". Picture by: Andrew Matthews/PA Wire/PA Images

Speaking in the Commons earlier, Oliver Letwin said he supports the deal - but was putting forward the amendment to ensure the parliament will be "secure" knowing that an extension has been requested, no matter which way subsequent votes on the deal go.

Opening the extraordinary Saturday session this morning, Boris Johnson said the House had "an historic opportunity... to reach beyond past disagreements by getting Brexit done".

A vast majority of opposition parties - including Labour, the SNP and the Liberal Democrats - spent the day voicing their objections to the new agreement.

A vast majority of Labour MPs oppose the deal, but a number of rebels had said they'd support it.

In the Commons earlier, Jeremy Corbyn suggested Boris Johnson had renegotiated the withdrawal agreement and made it "even worse".

The opposition leader insists the deal "would be a disaster for working people", adding that it would "hammer the economy".