Taoiseach Leo Varadkar has outlined further steps for re-opening the country. It followed a Cabin...

It followed a Cabinet meeting on Friday, where the next phase of the roadmap was discussed.

Mr Varadkar announced that it is safe to move to phase two of the plan, starting on Monday.

However the roadmap is to be accelerated, reducing the number of phases.

He said based on the evidence and recommendations, the Cabinet agreed to implement all elements of phase two, and more then previously planned - in the form of a 'phase two plus'.

There will now be four phases rather than five.

Phase three will start on June 29th and phase four on July 20th.

Leo Varadkar updates on the next phase of the government roadmap #Covid19 https://t.co/l4aAWZ5xp1

However Mr Varadkar said some measures, such as bans on mass gatherings, may be in place well into the autumn.

But he also confirmed that people can travel anywhere within their own county and 20km from their homes, whichever is greater, from Monday.

Up to 25 people will be allowed to attend funerals, while public libraries can also open from Monday.

Also from Monday, groups of up to six people can meet up indoors and outdoors once they keep two metres apart.

Groups of up to 15 people can also meet for outdoor sporting activities.

Shopping centres can re-open on June 15th - provided only the shops open and measures are taken to ensure people do not congregate at benches or food courts.

Shops re-opening will be required to operate staggered hours, opening no earlier than 10:30am and having dedicated time at the start for elderly, vulnerable and at-risk groups.

There will also be a new summer education programme for children with special education needs.

Education Minister Joe McHugh will bring proposals on this to Government next week.

From Monday June 8th, the following changes will come into effect: 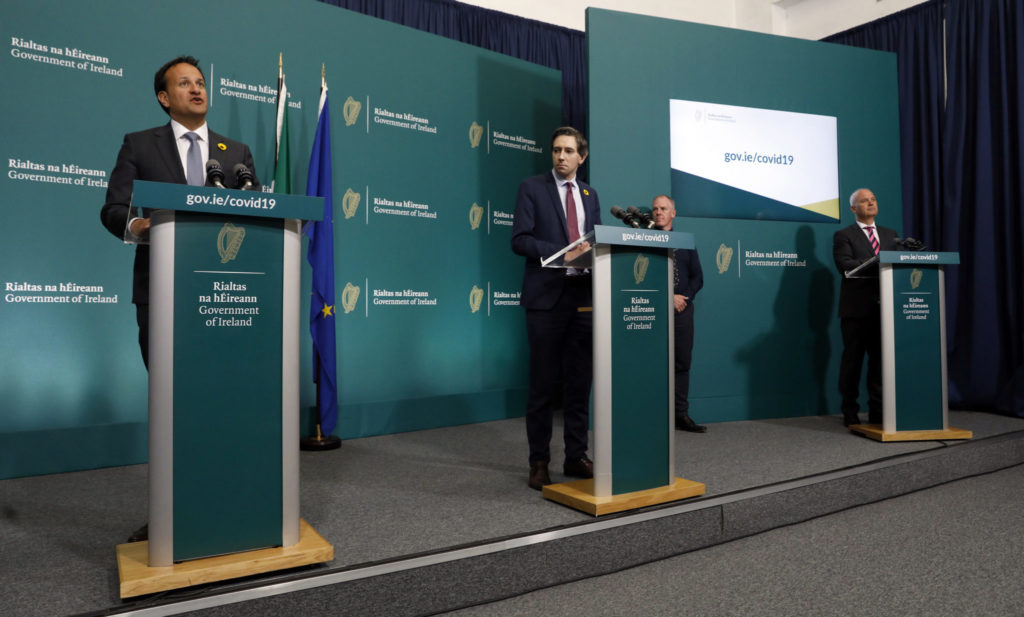 An Taoiseach Leo Varadkar (left) is joined by Health Minister Simon Harris and Chief Medical Officer Dr Tony Holohan to brief the media at Government Buildings on the next phase of the roadmap for re-opening society and business. Picture by: Leon Farrell/Photocall Ireland

The Government is also hopeful that the country will be able to move to a more advanced phase three in three weeks’ time.

This would include the re-opening of domestic tourism - bringing forward the opening of hotels, restaurants, bars that also operate as restaurants, hostels, caravan parks, galleries and museums to June 29th.

It is also expected that places of worship will be able to re-open from this point.

Mr Varadkar said: "As the Roman statesman Cicero said, ‘the safety of the people shall be our highest law.’

"This is the approach we have taken since the pandemic was declared in March. Today I can confirm that it is safe to continue to phase two of re-opening the country.

“This has been made possible because of the considerable sacrifices that you have made to restrict the spread of the virus and protect others.

“Over the last few months, fear has exerted a kind of gravity pulling us down but now we find there is hope lifting us up again.

“During this emergency we have suffered as country - lost loved ones and changed the way we work and live.

"We are making progress; we are heading in the right direction and we have earned the right to be hopeful about the future again."

"Many have yearned to break free from cocooning, from Monday it will be permissible for people in this category to welcome a small number of visitors to their home."

He added: "Our message today and for the next three weeks is for people to stay local.

"We recognise the difficulty that the travel restrictions are having, especially for people in rural Ireland.

"From Monday people can travel within their own county, or up to 20km from their homes, whichever is greater.

"It is planned to remove these domestic travel restrictions all together at the start of phase three, on the 29th of June.

"In the meantime, they remain legally enforceable by the Gardaí.

"We want people to stay local and to stay in their own county so the virus is not introduced into counties that are COVID-free today."

“Summer is not lost and this can be a summer of hope if we keep the virus at bay,” he said.

So, Cabinet decided today to plan a return of the tourism and hospitality sectors on June 29th as part of a revised phase three."

He said the move would "make it possible for us to explore our country as if for the first time and rediscover the beauty that is all around us."

Health Harris said: "We can now see the chance to take back our lives from the grip of this virus.

"Today we can take some further, tentative, but not insignificant steps towards a more normal society and economy."

Face masks: 'Use a bit of common sense,' advises minister