The UK's Brexit Party has stood down more than 300 candidates in seats won by the Conservative Pa...

The UK's Brexit Party has stood down more than 300 candidates in seats won by the Conservative Party in the 2017 election there.

Leader Nigel Farage said his party had made the decision based on polling, which indicated standing in seats in London, the south and the south-west may split the vote of pro-Brexit candidates and allow pro-Remain candidates to win.

Therefore the Brexit Party will not contest any of the 317 seats won by the Conservatives in the last election.

However, the party will still stand in all of the seats held by the UK Labour Party.

Mr Farage made the announcement at a campaign rally in England on Monday.

He acknowledged he had been quiet over the weekend amid speculation of the party's political strategy.

It comes after one of Mr Farage's biggest former allies was set to advise voters to back British Prime Minister Boris Johnson and not the Brexit Party.

Arron Banks, the millionaire who co-founded Leave.EU and bankrolled UKIP when Mr Farage was at the helm, is to launch a tactical voting app aimed at helping giving Mr Johnson a majority of leave-supporting MPs.

A spokesman for Leave.EU said: "This app is 'Back Brexit, back Boris'. We will tell Brexiteers the right candidates to back for Brexit.

"If that is against the Brexit Party then so be it. We have to get Boris a majority so we can get Brexit done." 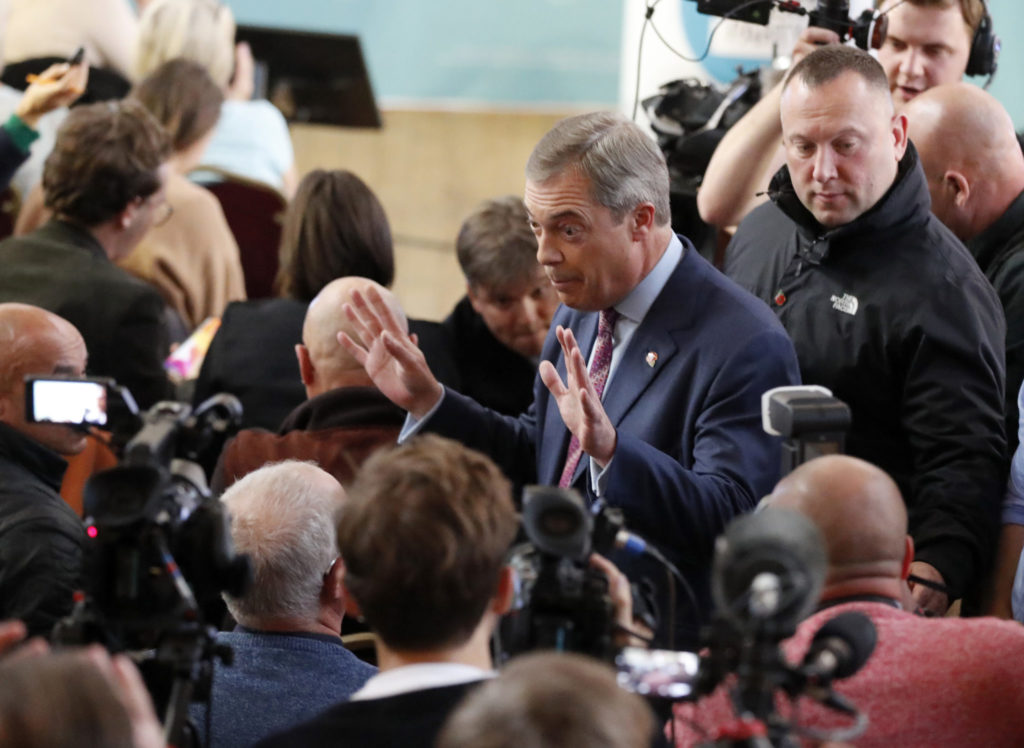 Mr Banks has warned Mr Farage that the app is likely to make similar recommendations in other seats, as Leave.EU predicts the new party might cost the Conservatives a majority.

The relationship between Mr Farage and Mr Banks was strained since the Brexit Party decision to stand 600 candidates across the UK.

Mr Farage told Brexit Party supporters they would not fight 600 seats anymore, but will fight all seats held by Labour in the 2017 election, and those held by Remain supporting candidates.

He said: "We will also take on the rest of the Remainer parties. We will stand up and we will fight them all.

"We will expose the fact of Labour's betrayal of five million of their own voters.

"It's fair to say the London dominated Labour Party is now thousands of miles away from its traditional safe seats and it is the time for seismic change in many of these constituencies."

He said the key would be to "hold Boris to his promises".

Mr Farage explained he had seen a change in direction from Mr Johnson and thought his concerns about the UK being politically aligned could be addressed.

He said: "He said we would negotiate a super Canada-plus trade deal with no political alignment.

"That is a huge change. Ever since Mrs May's abject speech in Florence, we have been aiming at a close and special partnership with the European Union."

"Boris last night signalled a very clear change in direction. I thought to myself overnight, 'That sounds a bit more like the Brexit we voted for'."

Previously Mr Farage had set a list of conditions which the Conservatives would have to meet for his party to go into alliance with them, including them standing down candidates against his party.