The European Union is to investigate British MEP Nigel Farage over claims he failed to declare gi...

The European Union is to investigate British MEP Nigel Farage over claims he failed to declare gifts worth up to a total of €512,119 (stg£450,000).

Reporter Mark Stone said the investigation centres on Mr Farage's lifestyle as an MEP during the summer and autumn of 2016.

In that period following Britain's Brexit referendum, Mr Farage made trips to the United States to meet US President Donald Trump and other right-wing politicians, allegedky funded by Arron Banks.

Other gifts provided by the insurance tycoon included a chauffeur-driven car and rent and bills on a €5m (stg£4.4m) home in west London.

Mr Banks, who co-founded Leave.EU, is under investigation by Britain's National Crime Agency (NCA) over allegations he and the unofficial campaign committed multiple criminal offences during the referendum campaign.

Stone said the problem is that Mr Farage, as an MEP, did not declare where the funding had come from.

The allegations, which first surfaced in a recent Channel 4 News report, were taken up by Catherine Bearder - an MEP for South East England.

Mr Farage currently leads the 'Brexit Party', which is planning to run candidates in the upcoming European Parliament elections.

He had a milkshake thrown over him during a campaign walkabout in the English city of Newcastle on Monday. 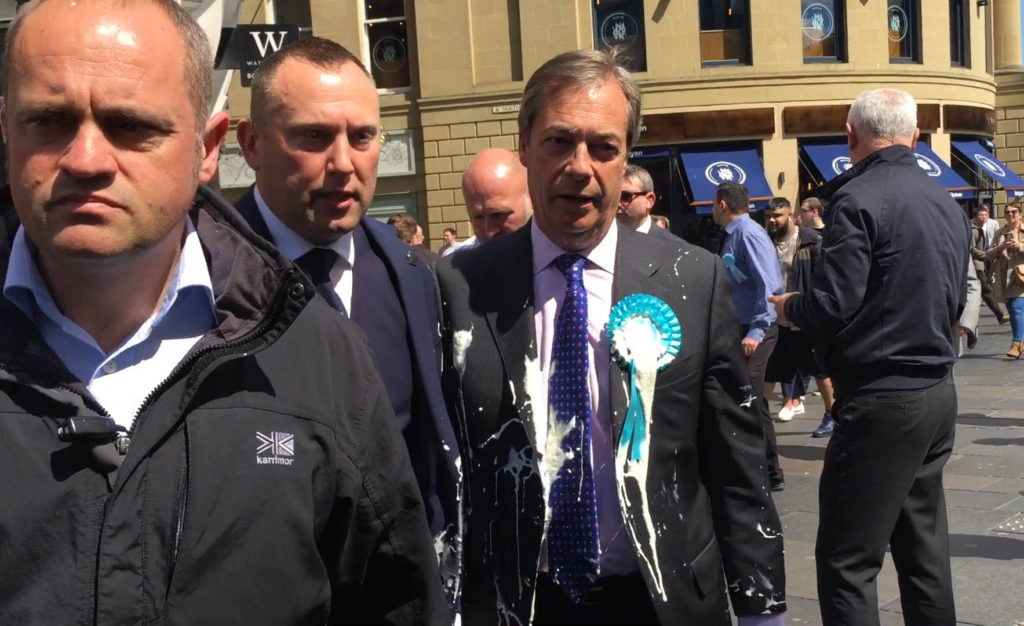 Nigel Farage after he was doused in milkshake during a campaign walkabout in Newcastle | Image: Tom Wilkinson/PA Wire/PA Images

In a video posted online in April, Mr Farage claimed: "We have been betrayed, that is why I set up the Brexit Party - it's why we're going to fight the European elections on May the 23rd".

"We can do so much better than currently we're getting from our members of parliament.

"We want to be an independent, self-governing nation - making its own laws, controlling its own borders".

The party polled higher in Britain than the two major parties combined, according to a poll published earlier this month.

The party is on course to get 34% of the votes, the Opinium poll for The Observer found.