UK Government groups tasked with finding alternatives to the Brexit border backstop have reportedly found “concerns and issues” with every potential solution.

A report summarising the findings of the official House of Commons ‘alternative arrangements’ working groups was leaked to The Guardian newspaper.

The paper reports that the documents have been marked “official sensitive” and outline how the findings of all groups advising Downing Street on the Irish border are being deliberately kept under wraps.

The UK Prime Minister Boris Johnson has repeatedly insisted that the backstop must be abolished and insisted it could be replaced with as-yet undefined alternative arrangements.

The EU has warned that the backstop must remain in place unless and until another arrangement that offers the same level of protection against the return of a hard border can be found. 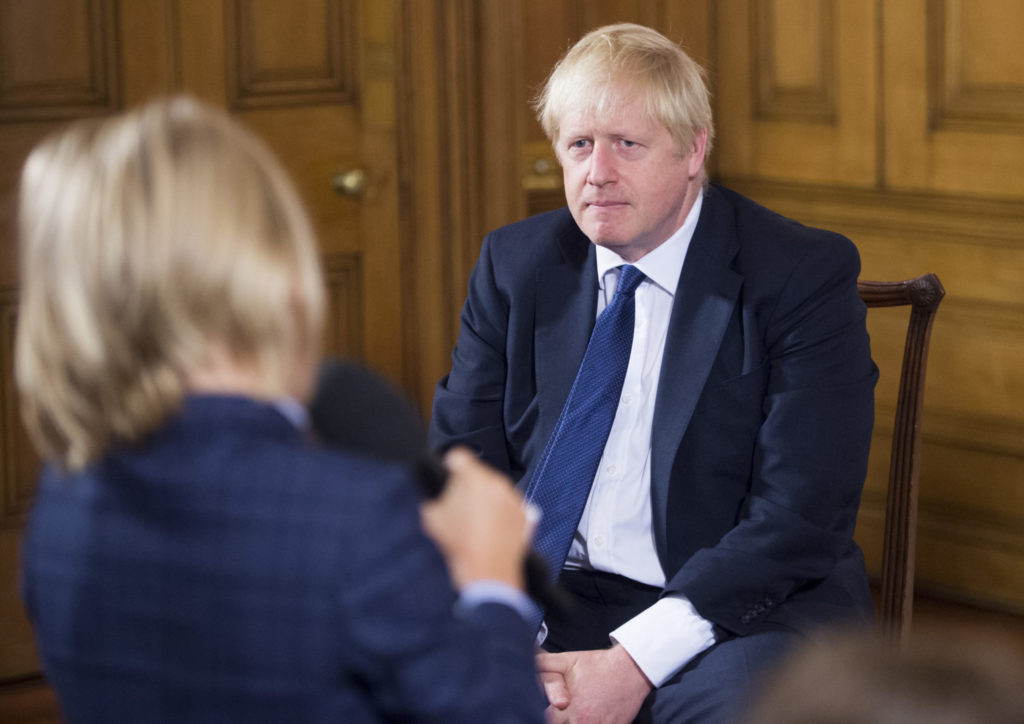 The government report found problems with all potential alternatives considered – and warned that they would leave small businesses struggling to cope.

“It is evident that every facilitation has concerns and issues related to them,” The report warns.

“The complexity of combining them into something more systemic and as part of one package is a key missing factor at present.”

Mr Johnson’s claim that mobile checks on livestock and crops could prevent a hard border was dismissed and the least likely option, with the report noting that: “Overall there were a number of concerns surrounding the deliverability of technological facilitations.”

It also found that Mr Johnson’s plan for a trusted trader scheme would require border infrastructure.

It comes after the Conservative Party threatened to withdraw the party whip from any party member who supports attempts to block a no-deal Brexit.

It said any member that does so will also be blocked from standing as a Tory candidate at the next election.

It would mean those who do will effectively sit as independent MPs until the fresh elections are called. 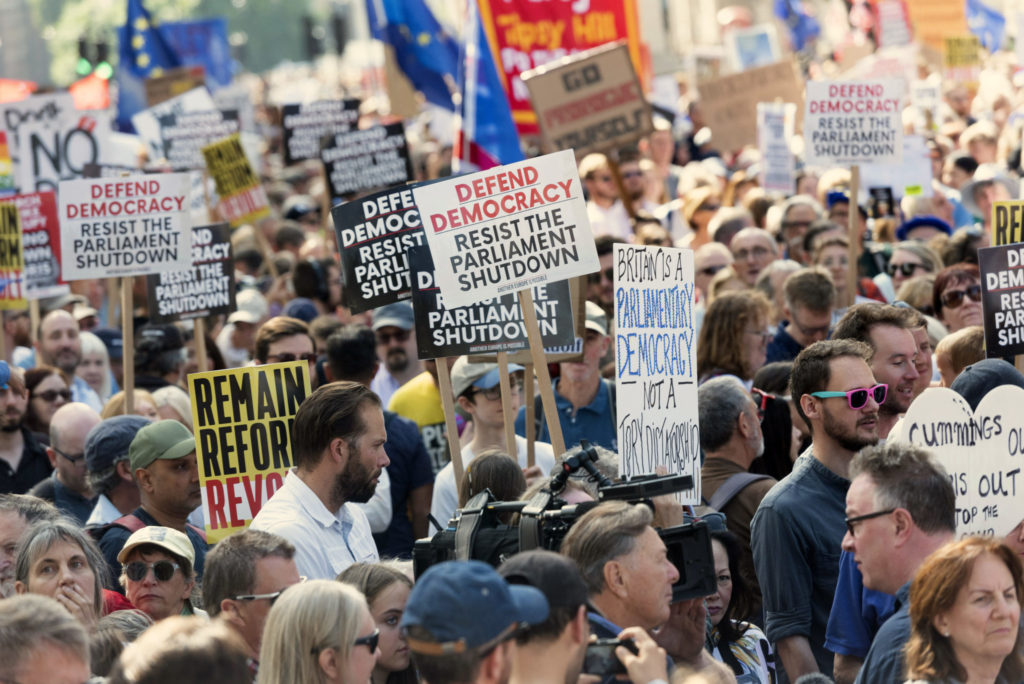 Protesters take part in a demonstration outside the Houses of Parliament in London, 31-08-2019. Image: unreguser/Xinhua News Agency/PA Images

The British Parliament returns from its summer recess tomorrow – with efforts aimed at preventing a crash-out expected to get underway immediately.

A cross-party alliance of opposition MPs aims to seize control of the House agenda in order to table a bill aimed at blocking no-deal.

Up to a dozen Tory MPs are reportedly willing to rebel against the Government and support the bill.

Mr Johnson ordered the threat of punishments for rebels during a meeting with Conservative Party whips on Sunday.

A spokesperson for the whip’s office said: "The whips are telling Conservative MPs today a very simple message - if they fail to vote with the government on Tuesday they will be destroying the government's negotiating position and handing control of parliament to [Labour leader] Jeremy Corbyn.

"Any Conservative MP who does this will have the whip withdrawn and will not stand as Conservative candidates in an election.

"There is a chance of a deal on October 17 only because Brussels realises the prime minister is totally committed to leaving on October 31. 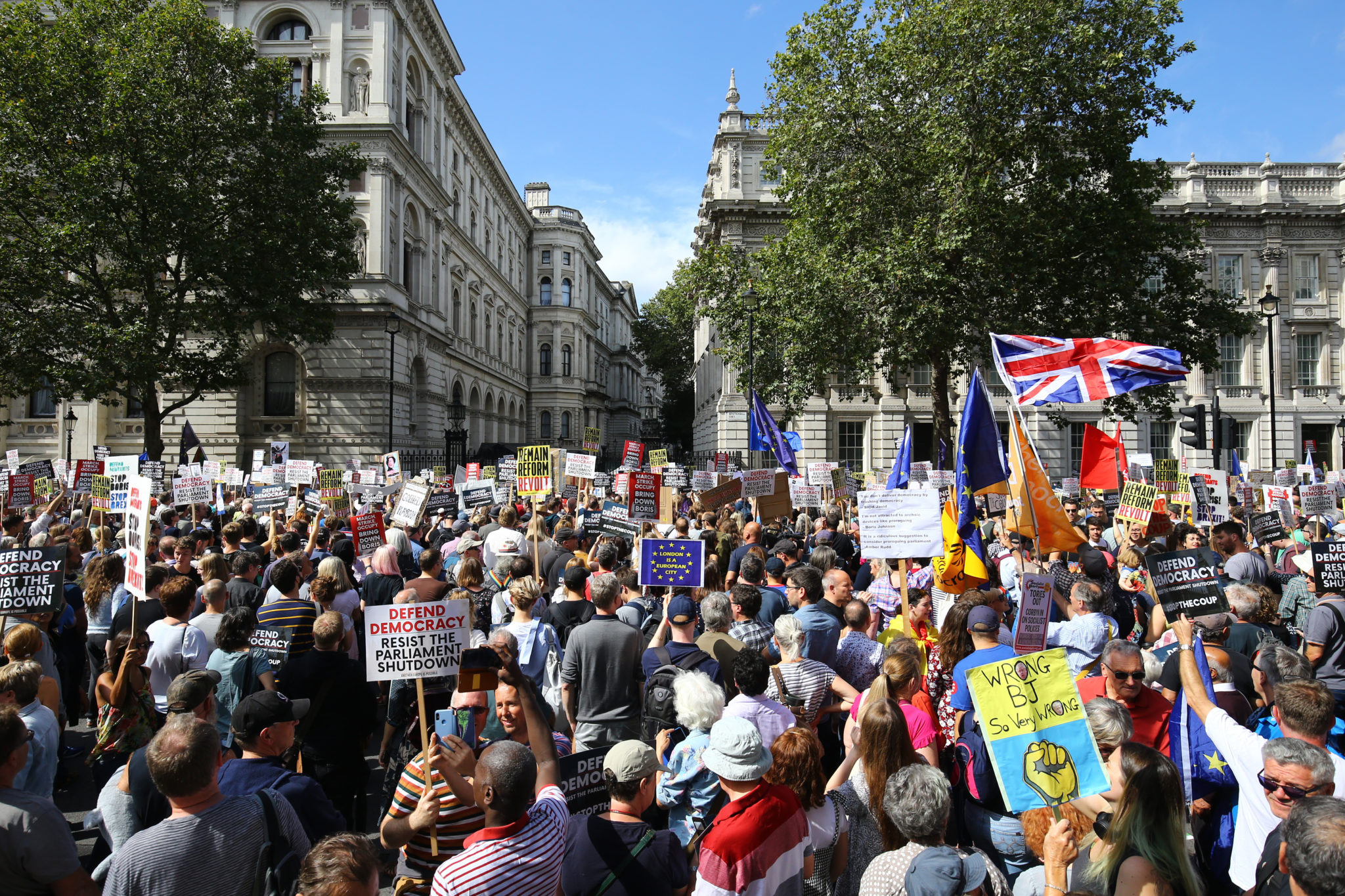 Protesters taking part in the 'Let Us Vote' day of action, organised by Another Europe is Possible campaign group in central London to demonstrate against Prime Minister Boris Johnson's decision to suspend Parliament for up to five weeks before a Queen's Speech on October 14.

The main opposition Labour leader Jeremy Corbyn is due to deliver a speech today in which he will say that his party is working with others to “pull our country back from the brink.”

“Like all progressive change, democracy was won from below it wasn't handed down from above,” he will say.

“So when a prime minister who hasn't won an election and who doesn't have a majority decrees that parliament will be shut down - because he knows his plan for a disastrous no deal doesn't have the votes - we say that is an attack on democracy which will be resisted.

“The people will not allow a phoney populist cabal in Downing Street, in hock to the vested interests of the richest, to deny them their democratic voice.”

The Labour Party is now backing calls for a second Brexit referendum.

“It's a battle of the many against the few who are hijacking the referendum result to shift even more power and wealth towards those at the top.”

Tens of thousands of people took to the streets of the UK over the weekend to protest against Mr Johnson’s plan to suspend Parliament in the crunch weeks ahead of Brexit.

Under Mr Johnson’s plan, Parliament will only sit for a few days before being suspended ahead of a Queen’s Speech announcing his domestic agenda.

It would then return just days before the EU Summit on October 17th – and just weeks before the October 31st exit date.