Theresa May has accused MPs of doing "everything possible" to avoid making a choice on Brexit. It...

Theresa May has accused MPs of doing "everything possible" to avoid making a choice on Brexit.

It came after Donald Tusk said a short extension to Brexit is possible - but will be "conditional" on the withdrawal agreement passing through the House of Commons.

The UK is currently scheduled to leave the EU on March 29th, unless European leaders sign off on an extension.

The British Prime Minister said the likely Brexit delay is a "matter of great personal regret".

She ruled out a longer extension, citing the fact that a delay until the end of the year or beyond would mean holding European elections.

In an address at Downing Street, she said: "Of this I am absolutely sure - you the public have had enough.

Mrs May said a delay would give MPs a 'final choice' on what they want from Brexit.

She added: "I passionately hope MPs will find a way to back the deal I've negotiated with the EU."

This evening, Mrs May also met with opposition leaders in Westminster to discuss the Brexit impasse.

Some of those in attendance said Labour leader Jeremy Corbyn refused to join the meeting due to the presence of Chuka Umunna - one of the MPs who left Labour to help form the Independent Group.

"We cannot give up" 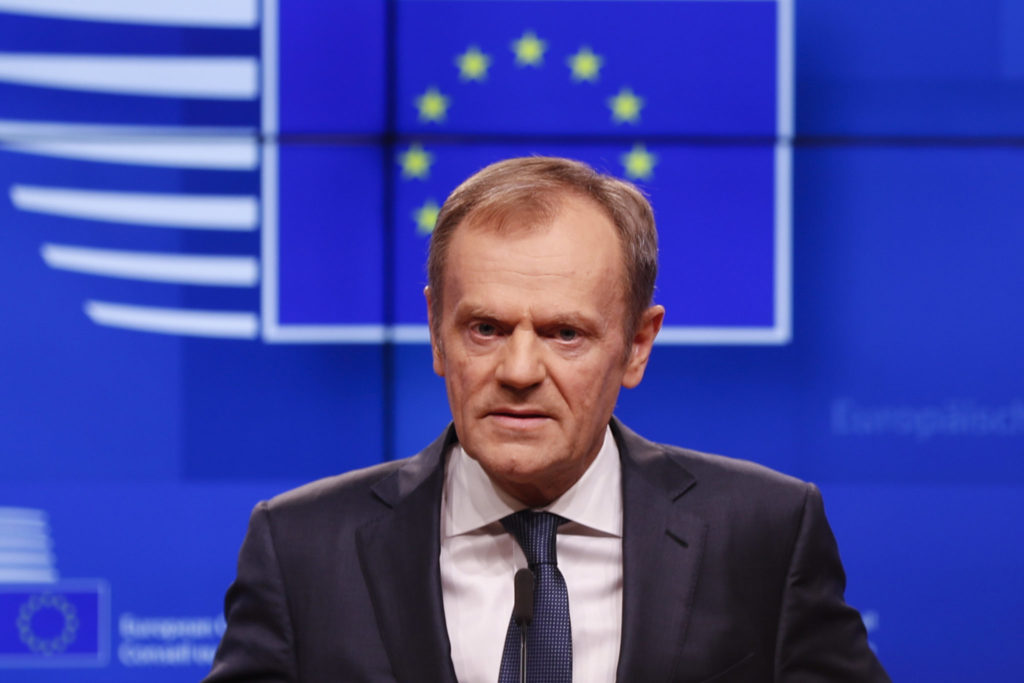 The European Council President Donald Tusk offered a brief statement this afternoon after Mrs May wrote to him earlier seeking an extension to the Article 50 process.

June 30th is the last day Britain could remain in the EU without taking part in European elections.

Amid reports that the EU will only be willing to extend Brexit until May, Mr Tusk did not commit to an extension date.

Speaking ahead of tomorrow's gathering of EU leaders, he said the proposed date of June 30th "has merits" but also creates a "series of questions of legal and political nature".

He said: "If the hope for a final success may seem frail - even illusory - and although Brexit fatigue is increasingly visible and justified, we cannot give up seeking until the very last moment a positive solution."

He again ruled out reopening the withdrawal agreement, saying the EU had responded with "patience and goodwill" during negotiations.

In Dublin earlier, Taoiseach Leo Varadkar said: "We have always said we would be open to an extension if there was a purpose to it.

"I think it is important that we hear from her first and we will respond as 27, as the EU, over the next couple of days."

In the House of Commons earlier today, Mrs May told MPs: "The idea that three years after voting to leave the EU, the people of this country should be asked to elect a new set of MEPs is - I believe - unacceptable".

She confirmed plans to bring forward a third 'meaningful vote' on the Brexit withdrawal agreement.

The deal was voted down for a second time last week, and the House of Commons Speaker John Bercow has ruled out another vote on the same agreement.

A commitment to only a short extension is likely to avoid a major backlash from pro-Brexit ministers who have vocally opposed the prospect of a longer delay.

However, other politicians have continued to criticise the process and Mrs May.

Conservative MP Nigel Evans told BBC: "The trust I think is waning... it's ebbing away.

"She has failed. I think there are now big question marks about whether she should be allowed to carry on."

"There are big question marks" over whether Theresa May should carry on as PM, says Conservative MP Nigel Evans - "trust is waning, it's ebbing away... she has failed"https://t.co/ZHsYNsi6zg #Brexit pic.twitter.com/WwBSUTOtl1

The only relevant question now is if PM May can muster a cross-party majority by next week. #Brexit