Those who were lucky enough to attend last night’s concert in the Iveagh Gardens in Dublin say ...

Those who were lucky enough to attend last night’s concert in the Iveagh Gardens in Dublin say it was an emotional celebration of live music.

Just 500 people were in attendance with strict social distancing and contact-tracing measures in place.

Newstalk reporter Josh Crosbie was one of the lucky few and he spoke to these people on their way in.

“It is surreal,” said one. “It is great; I think the setup here is brilliant and I am absolutely delighted to be back. I am really looking forward to the gig.

“I think I won’t believe until we are actually seeing live music. It has been too long. It is great, it is a lovely day and I can’t wait to get inside to see the music.”

“I mean it is not exactly the same but it will just be class to have live music and be able to see the artists and their reaction to everyone,” said another. “It is fantastic and it is a great experience to be here this evening.

The Arts Minister Catherine Martin said it was “absolutely amazing” to be getting ready for musicians to take to the stage.

“This is such a symbolic moment for everyone who works in the music industry,” she said.

“It is emotional, it is a celebration, the sun is shining and, even to put on the little armband coming in, it was like ‘yes, we are here’ and I am really looking forward to tonight.” 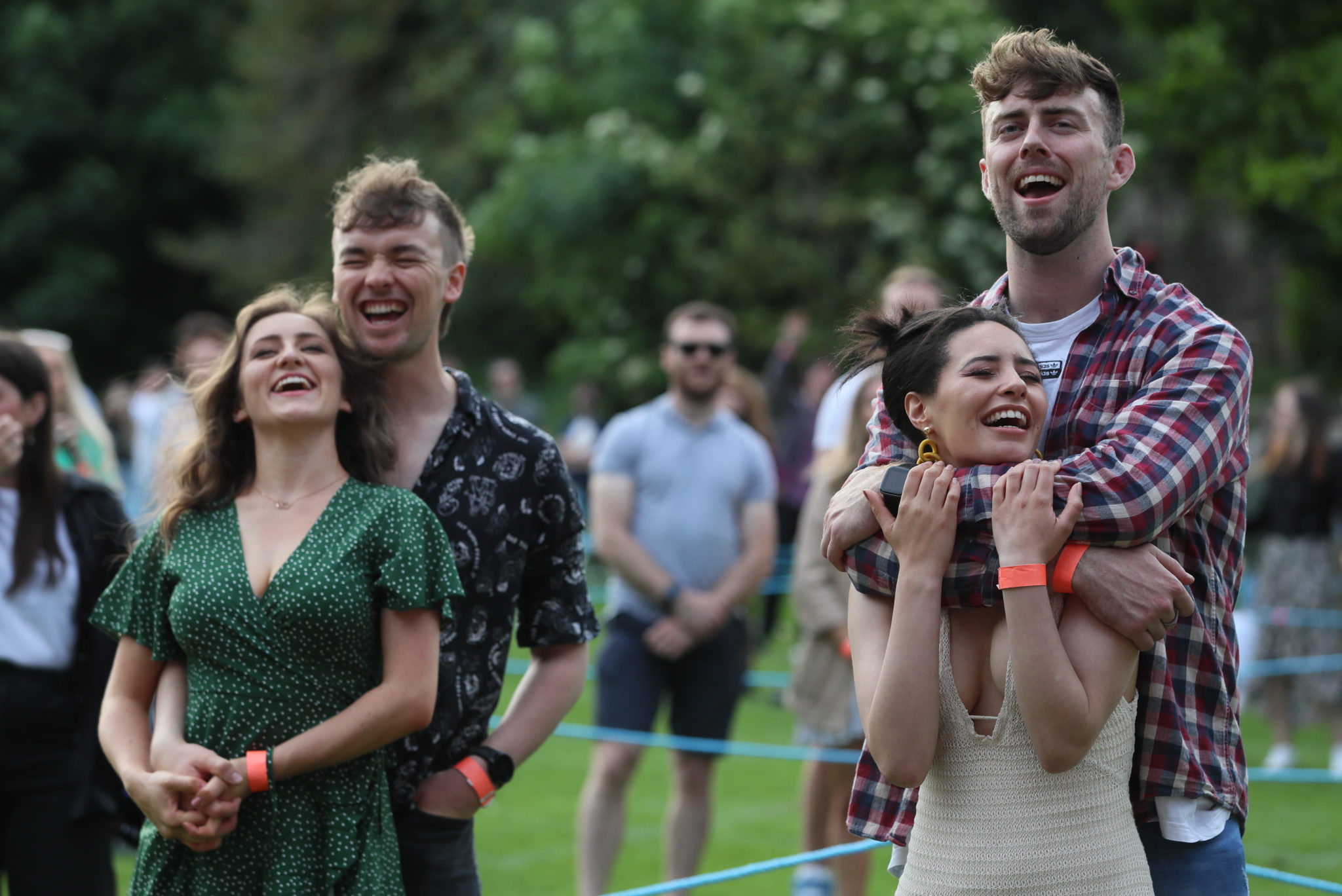 The event got underway at 7pm with people aske to arrive at designated times in the hours before.

McMorrow took to the stage at 8pm and took fans through a set-list of old favourites and newer hits before closing things off around 9:30pm.

The gig was organised by the National Concert Hall and NCH Head of Operations Barry Walsh said he hoped it would be the first of many.

“There is a huge emphasis on the control measures in place here,” he said.

“What we want to do is make people feel very, very safe in a very light-touch way. That people can still really enjoy this concert as much as they possibly can – albeit with a much-reduced capacity and audience-control measures.

“The idea is for us to make an environment that people feel very, very relaxed in.” 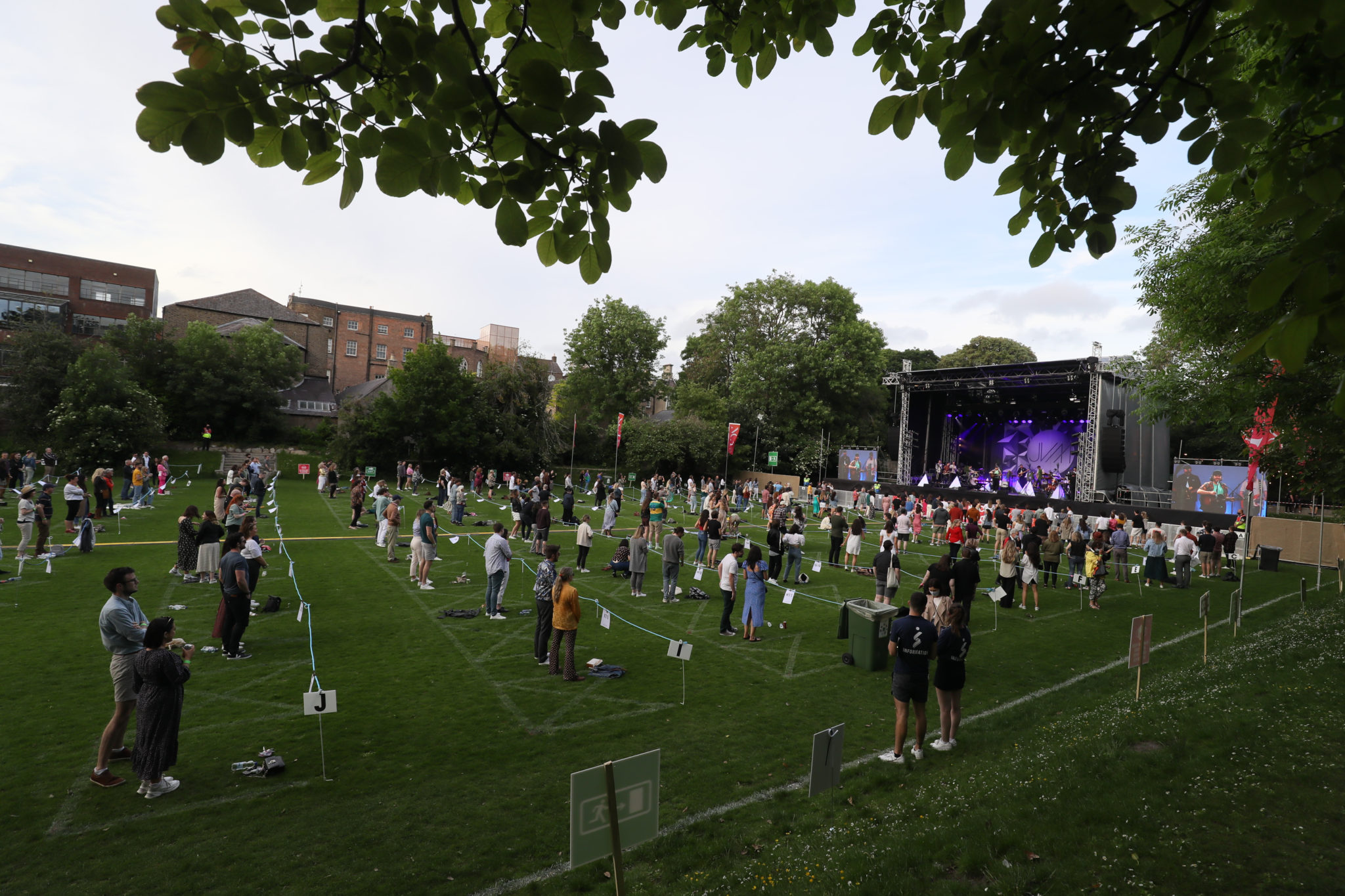 He said the 500 people in attendance were “incredibly lucky people.”

“We could have sold this ten times over and we are very, very confident that these measures will deliver a very safe, protective and controlled environment.

“Going forward if we went from two metres to one metre you are making a huge difference in terms of the numbers and the commerciality.”

After the gig these fans told Josh the night was “unreal” – except for one small issue.

“It was very well organised and very spaced out no feeling on top of each other but it was a pity we couldn’t have a beer,” said one.

“It was still enjoyable but if you want to have a beer, you should be able to have a beer. You are talking about adults here and it is up to them to decide what they want to do.”

“It was great to be in front of the performer and with the crowd around you it was fantastic,” said another. “The only thing that was lacking was there was no booze but you know …”

You can listen back to Josh’s report here: