The Government has said it will increase spending in the budget – even if the UK crashes out of...

The Government has said it will increase spending in the budget – even if the UK crashes out of the EU with no deal.

The Finance Minister Paschal Donohoe announced the plans in his Summer Economic Statement this afternoon.

He said Budget 2020 will look very different depending on the outcome of the UK’s exit from the EU, currently scheduled for October 31st.

If the UK leaves with a deal, the budget will include a €700m increase in capital spending as set out in the Stability Programme Update earlier this year.

Should the UK crash out however, the Government will be forced to borrow heavily to deliver on that spending pledge, while also increasing its spend on social welfare and supports for industries that will suffer. 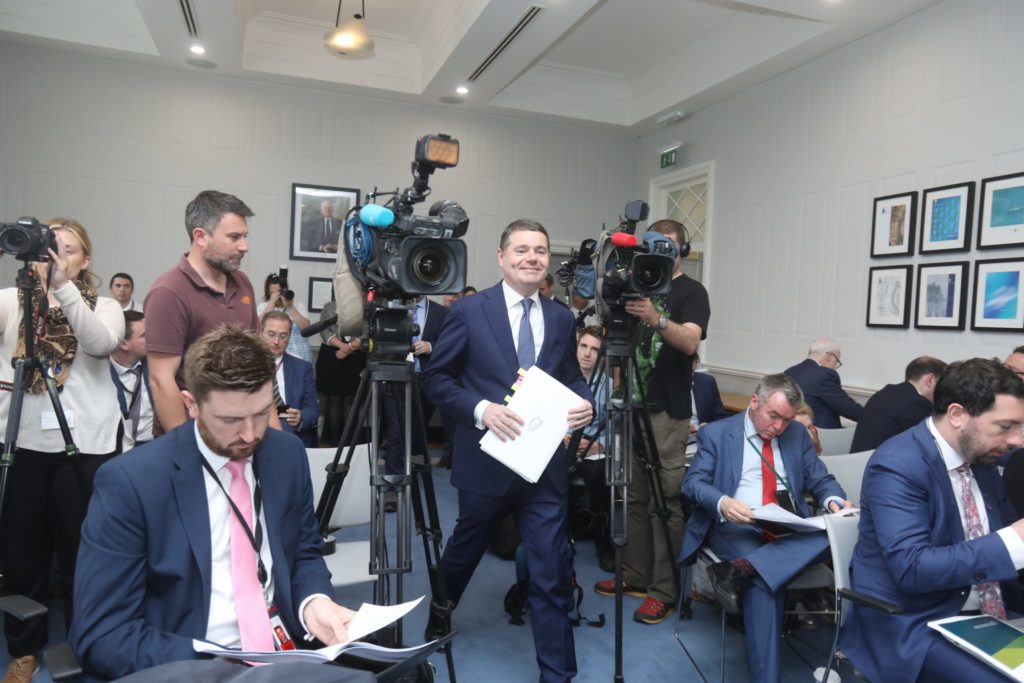 Describing Brexit as an “economic and political event that has never happened before,” Minister Donohoe said failure to agree a deal could cut economic growth by up to 3.5%.

“Were we to face this challenge, it would mean we would have an economy which, as opposed to growing between 3.25% and 3.5% across next year; we would see an economy that would be far more likely to grow at anywhere between flat – in other words no economic growth – up to approximately 1%,” he said.

“So we would see an economy very, very different to what it is today.”

Minister Donohoe said it is impossible to know at this stage which plan will be need, given the uncertainty in the UK.

"Those who are intimately involved in the decision in the UK are reluctant to outline their view on how they will handle the matter.

"Surely you will understand that at this point in time it is appropriate to wait; to allow a number of matter to clarify themselves before we reach a determination.

"We will do that in September."

"I think you have to hold resources in reserve," he said.

"I think he is making a call too early. We are still in June; a lot can happen in politics and economics in the period of four months.

"He is locking in a budgetary strategy now against the backdrop of a lot of unknowns."

He said he believes the planned rainy day fund will have to be put off if there's a no deal Brexit.

Paschal Donohoe hints that if there's a no-deal Brexit tax cuts are still possible but they may be delayed over a number of years. Priority in that scenario will be protecting jobs

Ahead of the announcement, Labour leader Brendan Howlin said Fine Gael was attempting to ‘mend its broken hand’ by promising spending increases.

“It is quite clear that they have no reputation left in terms of prudent fiscal management of the economy,” he said.

“They have burned money on any of the major capital plans under their purview.

“The Children’s Hospital; the National Broadband Plan and, by the looks of it, Metro North.”

Minister Donohoe insisted the economy is “being well-managed and is in a very different place to where it was a decade ago.”